The Panigale, Ducati's flagship superbike, has been revered and respected. And with the new Panigale V4, Ducati feels it has the undisputed king of superbikes on its hands.

Zigwheel's Kartikeya takes it for a spin at the Circuit Ricardo Tormo in Spain to find out. 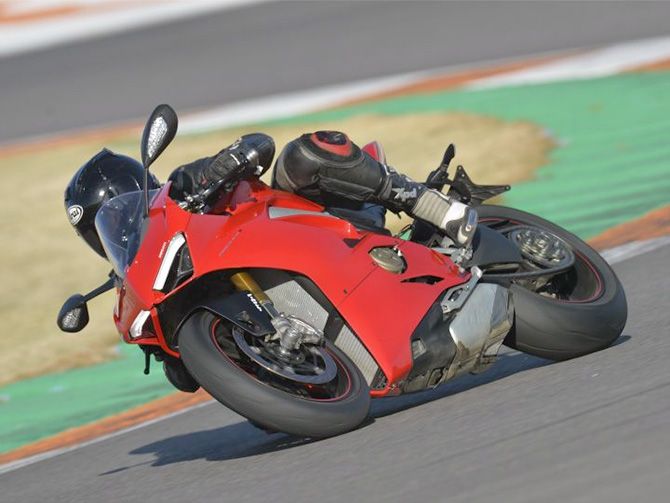 Ducati Panigale. It is a name that carries a lot of weight. How much of it is down to the Italian ancestry and exoticism, and how much of it down to the superbike's capability, is debatable.

Amongst Japanese, German and Italian rivals the 1299 has always been in the fight, if not the ultimate victor. More often than not, the Ducati's nature required the rider to adapt to its foibles, rather than the other way around.

Now, with the all-new Panigale V4, Ducati wanted to cement its claim to the podium and win a large chunk of the riders' hearts.

So, for the 2018 Panigale V4, heritage has been sacrificed at the altar of performance, as Ducati steps up from its L-twin engines to the first V-four. Does the Panigale V4 sparkle with the same gravity and intent?

The Ducati Panigale V4 will come to India this June, and it will be offered in the standard version as well as the loaded V4 S version. We spent some time with the latter at the Circuit Ricardo Tormo in Spain to get some answers. The rear wheel slides dramatically as I crack open the throttle at the exit of Turn 2. It is a tricky and narrow right-hander that has a gravel trap not too far from the asphalt. Exiting the turn, the throttle response in second gear in Race mode is ferocious.

A power to weight ratio of 1.1 feels properly alarming when you are on the motorcycle. Despite some concerns, I keep the throttle open and soak in the brutal acceleration as the V4 S smoothly regains composure and rockets out towards the next turn.

To any bystander, the sound is a lot like a deep thunder roll that erupts out of the twin underbelly exhausts. 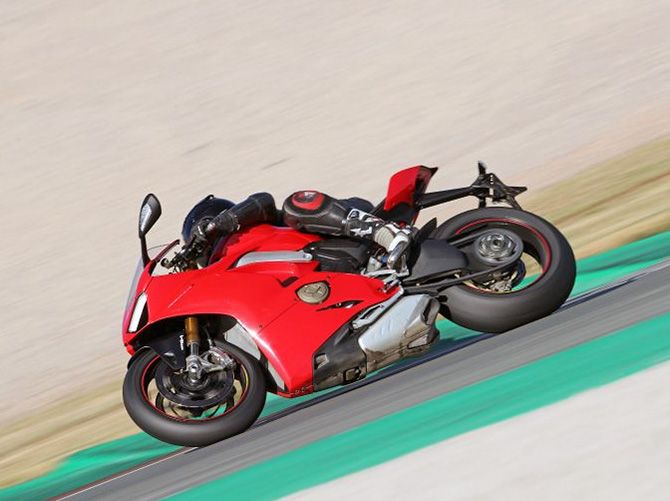 Power wasn't an area that previous Panigales lacked in. And now that you have 214PS of power to play with, no doubts shall ever arise.

Torque has gone down to 124Nm but nearly all of it is available across a much wider rev range between 8750-12,250rpm.

The rev limit has increased from 12,500rpm to 14,500rpm. These might seem like small changes but add it all together and you get the sweetness. Now, the engine doesn't punish you with jerky throttle responses when you accelerate from the middle of a corner, or when you use a higher gear.

Simply put, the new engine doesn't have the quirks of the L-Twin, which makes it a whole load easier and nicer to ride than any Ducati superbike before it. This has obvious benefits on a tight and twisting track like Valencia but it also makes the new Panigale a sweeter motorcycle to live with!

Although, we'd be a little bit shocked and annoyed if you bought one to commute on in India. But, for the first time the Panigale comes with a Street mode that softens throttle response for a more easygoing commute. The Valencia circuit is incredibly tight, and getting into fifth gear is an occasion reserved for the main straight alone.

The quickshifter is super smooth, and on the 5” TFT display the rev counter blinks quickly to warn me to pop the next gear. The speedo reads somewhere north of 260kmph before it's time to tap through the gearbox.

The Ducati Quick Shifter is but one of the tools in the Panigale's arsenal that has been honed further. It now uses lean angle data to make shifts in corners smoother.

Ducati Slide Control lets you get wheelspin out of corners, but arrests slides when the angle exceeds the safe limit. The smoothness with which these systems work is impressive, as the latest generation of electronics can control the throttle, spark timing and fuel injection to soften the power delivery. 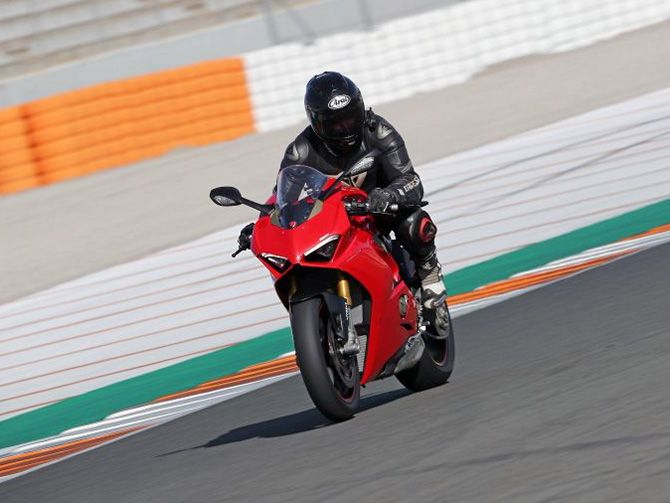 Quite simply, the six-dimensional IMU on the Panigale backed with MotoGP learnings creates an experience where even a modest rider will hone his skills safely while feeling masterful too!

Ducati say they wanted to make a potent motorcycle that could be enjoyed by regular riders. Well, job done.

Why and how: The V4 Stradale 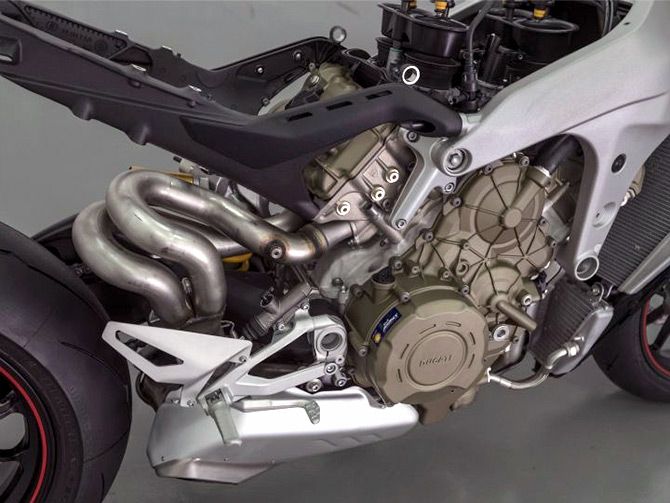 Did we say V4 engine already? Ninety degrees, V4, to be specific. This is the beginning of a new chapter in Ducati's story.

For the first time, a modern Ducati superbike will be powered by a four-cylinder engine that draws its DNA from the Desmosedici GP.

Ducati says that despite adding two cylinders the overall weight of the engine has increased by 2.2kg only.

Also, the engine is now shorter in height and smaller in length than the 1299's motor. However, it is a bit wider and heavier too. The V4 Stradale's engine uses the same bore and even the engine layout is similar to the race bike. More cylinders equal smaller pistons, more revs and more smoothness. Check!

Smaller pistons require smaller valves and so the V4 S makes do with steel valves instead of titanium.

The new engine also impacts the dynamic ability considerably. The V4 engine is tilted 42 degrees backwards and this has allowed it to be moved forward to put more weight on the front wheel, thus reducing the Panigale's tendency to wheelie.

The engine's counter-rotating crankshaft also helps on this front and has other benefits too. More on that, later. 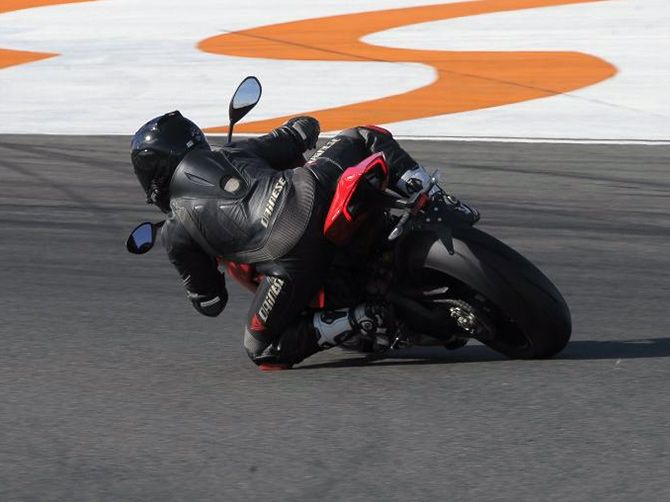 Look at the spec sheet and things seem to be going in the wrong direction. Increased rake, trail, wheelbase and added weight on the front wheel seem contrary to what we would have wanted from the Panigale.

Also, overall weight is up by around 5 kilogrammes. Sure, the S' forged aluminium Marchesini wheels help reduce weight.

The new Pirelli Diablo Supercorsa SP tyre for the rear uses a new 200/60 size with a more rounded profile and two compounds for better edge grip. 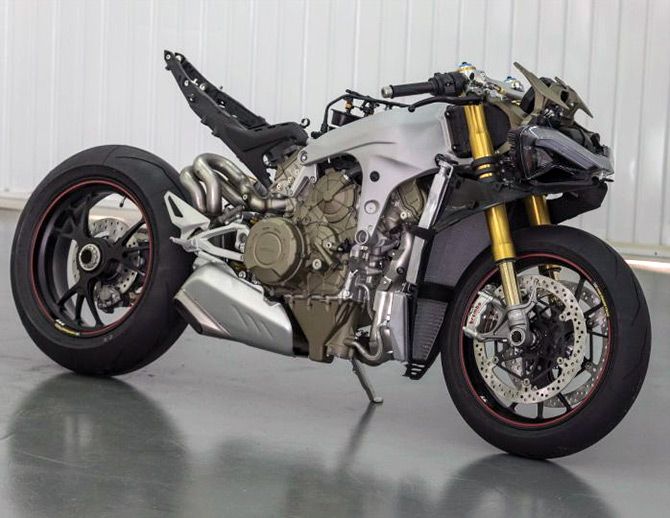 Instead of a trellis monocoque the Panigale now uses a cast alloy front frame that gave Ducati more flexibility in tuning the precision and agility of the handling while making it easier to ride.

The frame weighs all of 4kg and uses the engine as a stressed member. Weight has been of great importance here.

The LED headlamp units have been lightened by 0.5kg. The deep-drawn technique for making the 16-litre fuel tank allows it to be shaped so that it can flow under the rider's seat to distribute weight better. While the standard V4 makes do with Showa Big Piston Forks and a Sachs unit at the rear, the S version packs electronically adjustable suspension from Ohlins: 43mm NIX-30 forks up front and a TTX36 shock at the rear.

Ohlins Smart EC2.0, the software behind the system, is the real game changer here, allowing you to fine tune the suspension with a riding mode for every event, be it accelerating, cornering or braking!

The V4 also boasts of new electronic wizardry like Brake to Slide, which when set to Level 2 will allow the rider to lock the rear wheel when entering a corner.

The system intervenes only if the slip angle is greater than 5 degrees, while Level 1 will allow for more ludicrous behaviour. There is an even more sophisticated suite of electronics like Ducati Wheelie Control EVO, Engine Brake Control EVO and Ducati Power Launch to keep things clean yet exciting. Stylema calipers from Brembo promise next level braking performance too. Now, time to speak geek, and tackle the counter-rotating crankshaft.

Simply by rotating in the opposite direction as the wheels, the crankshaft negates some of the gyroscopic effect of the wheels and that supposedly helps agility. Does it? 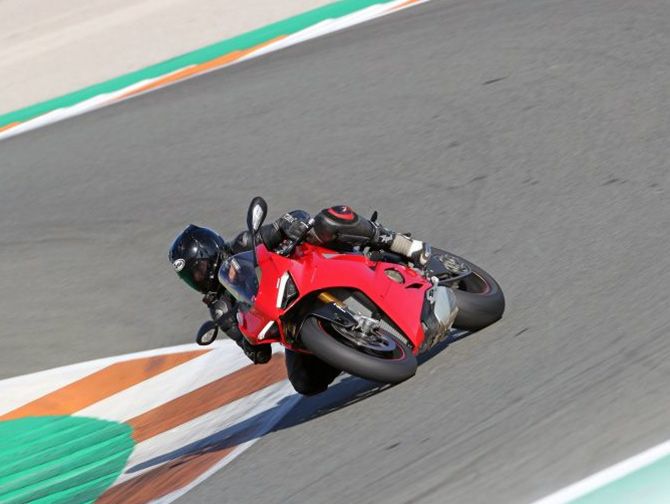 How in the world! That's all that I can think of at first. There's no way this track-focussed superbike is steering with such willingness! Lightness!

It's a term that I have stopped associating with the new generation of track-focussed superbikes, as they end up becoming heavier to steer as they look for more grip to brake later and corner harder.

However, the Panigale has proved that the impossible combination of lightness and confidence is possible even on a rocketship. 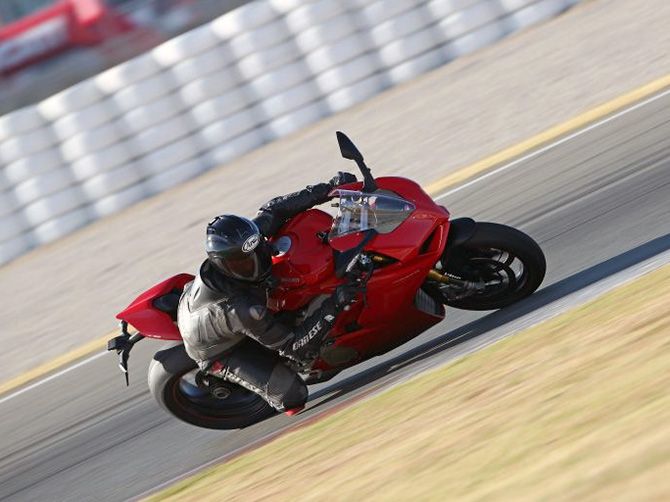 Be it the fast turn or the sweeping turn, with the crest in the middle, the Panigale feels incredibly adjustable. Yes, there is some hesitation from the rider but you learn to turn in later and more aggressively.

While the rider's seating position hasn't changed, the footpegs on the V4 are 10mm higher now to help with cornering clearance. The grip from the Pirellis was always comforting and as it turned out, the V4 can really lean!

In the right hands, the Panigale V4 will be devastatingly quick. Ducati claims that it is a full second faster around the track than the 1299.

The finesse of the Panigale is felt in all little things. The braking from the Brembo Stylema calipers is hard to believe -- just light pressure at the lever is enough to drop you down from over 260kmph without a fuss.

Pull harder and the motorcycle squirms a bit, but the rear wheels stays well planted. Our aching shoulders and triceps made it clear that stomp-grips were desperately required on the bike. 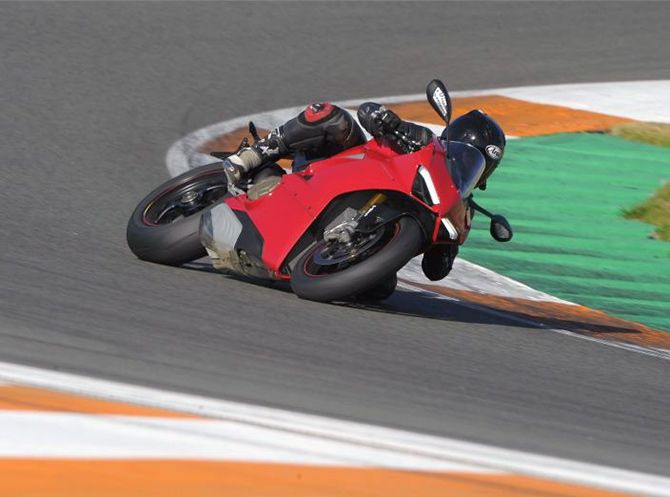 You never feel the electronic suspension stumble even when I ran over kerbs or when braking ultra late, the suspension seemed to work invisibly in the background to just inspire confidence.

It is clear that the Panigale V4 isn't a Ducati that asks you to change and adapt. Instead, it is a new age Ducati that flatters the rider irrespective of his or her skill level. 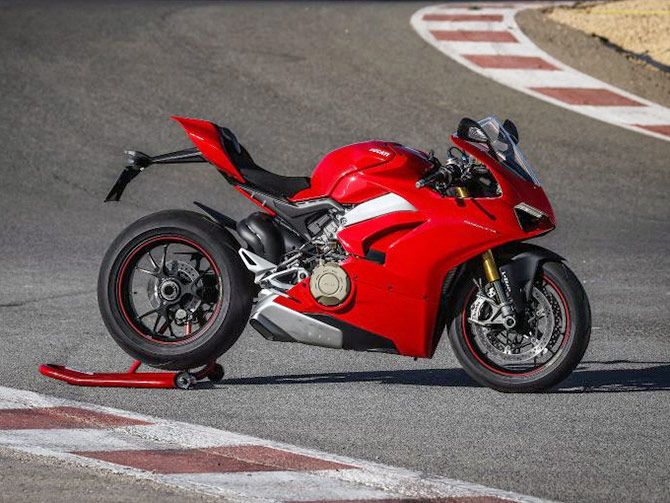 When it comes to design, our expectations from Italians are sky high. We expect effortless elegance and eloquence. The red V4 S in front of me, though, seems to be trying. Its hollowed-out eyes with the LED DRL's hanging off the top, and the layered fairing with the new aluminium chassis being shown off in the middle, make it look a bit attention-hungry.

And if you think the V4 S looks a bit squashed, you aren't alone. There just seems a bit more visual mass from nose to belly now. But the overall quality is flawless. The quality of paint, switchgear, and the fit and finish is impeccable. The Panigale V4 S is a rare motorcycle, one that you struggle to find fault with. This time the nuances that held the Panigale back seem to have been wiped clean.

The new Panigale V4 S' sheer performance, dynamic ability and the ease with which it is delivered leaves us in no doubt about the absolute punch that this motorcycle packs.

The real victory here is that Ducati has managed to create an incredibly potent sportsbike that will feel natural and inviting to riders of different skill levels.

We'll say it without hemming and hawing: the Ducati Panigale V4 S might very well be the new benchmark for litre-class motorcycles. To top it off, Ducati has launched the Panigale V4 at an unbelievable starting price of Rs 20.53 lakh for the V4 and Rs 25.29 lakh for the V4 S version!

The downside? For now, only 20 are available and you'll have to wait till June to get your hands on one! 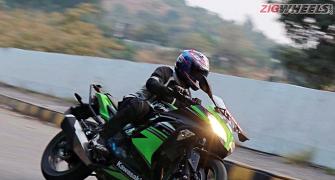 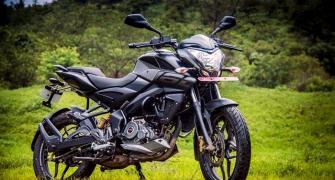