Mocked for tomboy looks, this 18 YO did India proud

Three years ago, she was not allowed to participate in a fashion show because of the way she looked.
In May 2019, Sushmita Singh created history by becoming the first Asian and Indian to win Miss Teen World.
Her inspiring story is proof that nothing is impossible to accomplish for those who believe in their dreams.
Text: Divya Nair/Rediff.com
Video: Afsar Dayatar/Rediff.com Twenty five years ago, an 18 year old girl from Hyderabad, Andhra Pradesh, made millions of girls in India and beyond to believe in their dreams.

Her name was Sushmita Sen. And she was the first Indian to win Miss Universe in 1994.

In May 2019, another 18 year old from Kalyan, a town in central Mumbai, created history by becoming the first Asian and Indian to win Miss Teen World 2019.

And it can't be mere coincidence that her name is Sushmita Singh.

A month after her return to the country, Rediff.com's Divya Nair and Afsar Dayatar travelled to her home in Kalyan to know more about her inspiring journey to the top and how she plans to change the world with her love, talent and confidence. 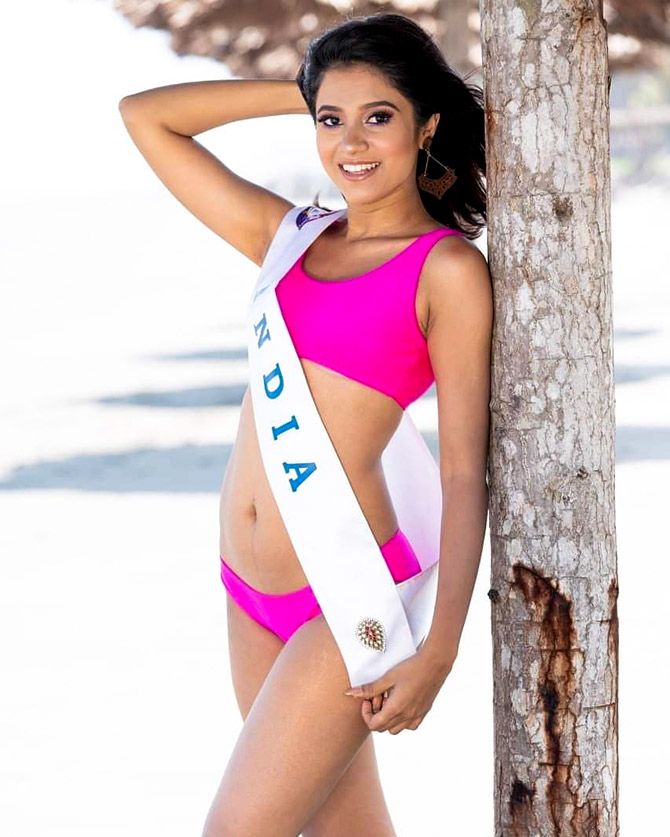 Sushmita who introduced herself as an all rounder through school and college loved playing throwball just as much as she loved dancing.

The national level throwball player who recently completed her class 12 (commerce) scoring 74 per cent has lost track of the trophies, medals and certificates she's won over the years.

When she was in class 9, Sushmita wanted to participate in a fashion show so she could "enjoy the experience and learn something new," she said.

When the last leg of auditions were going on and she realised her name wasn't on the list, Sushmita decided to approach the teacher.

"They had screened and selected a lot of girls and I was standing there. So when the last lot of contestants were being announced, I went and told the teacher, 'Ma'am I also want to participate in the fashion show.'"

According to Sushmita, the teacher looked at her and said, 'We can give you clothes like boys. You look like a tomboy so you don't fit in here.'

'It wouldn't have mattered if I had participated and failed the auditions that day,' she said. But she hadn't expected the teacher to turn her down without giving her a chance.

When she came home and shared the incident with her parents, her father Naveen Singh -- who works as director, TRIG Guardforce Ltd in Andheri, Mumbai -- encouraged her to follow her heart. The next three years, Sushmita groomed herself in fashion modelling and worked hard on herself so she could make herself competent enough to represent India on the global stage.

She is thankful to her parents -- especially her mother Satyabhama Singh, who teaches underprivileged kids at a school in Kalyan -- for believing in her capabilities.

"I have only gratitude and respect for my parents who never said No to me. They have worked so hard to give me the best they could afford. The only way I can repay their debt is by making them proud," the beauty queen shared.

Watch the video to see how a tomboy transformed herself into a glamorous international fashion icon.

The story behind her name It was Naveen Singh's decision to name his daughter after the former Miss Universe.

In the video below, Sushmita, who considers dusky British model Naomi Campbell her fashion inspiration, reveals what she admires the most about her idol Sushmita Sen.

You'd expect a beauty queen like Sushmita to be on a strict diet, counting her calories.

But when we quizzed her on her diet, her response surprised us.

"I am a big foodie. I love pizza," she confessed.

Watch the video to see how the young foodie keeps her calories in check.

Beauty queen with a golden heart 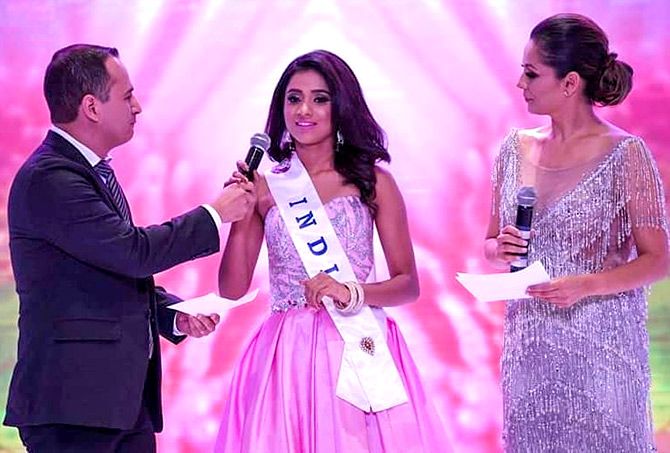 IMAGE: Sushmita wants to work on her strengths and make herself competent enough so she can participate in Miss Universe and bring back the crown for India.

Sushmita believes that winning the title is just one part of her journey. She knows that the crown comes with a lot of responsibilities too.

The young model who wants to finish her higher studies and become a journalist, wants to work towards improving education, healthcare and inspire young girls like her to be confident, positive and follow their dreams and careers.

Ask her what is the one thing she'd like to change in India, and she'd say, "old age homes."

She believes that one of the greatest assets India has is the foundation of strong family values and morals which were passed on to us by our ancestors.

Her appeal to young Indians: "Stop sending your parents to old age homes where they are deprived of love and affection."

Watch her talk about it in the video below:

Even after winning the crown, Sushmita says she continues to receive hateful, negative comments from strangers on her social media.

Despite all the negativity thrown at her, she doesn't feel bitter at all.

In fact, Sushmita is thankful for all the criticism that was thrown at her at an early age.

She says "the experience made her stronger and helped mould me into a positive person."

What is her message to readers?

"The world has enough negativity to deal with. Everyone you know is going through some form of struggle. The least you can do is say something nice, inspire someone or simply say nothing at all."

In the video below she explains how to deal with trolls and negative feedback. 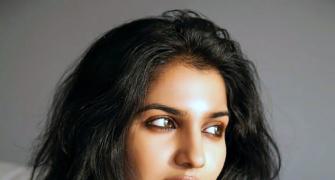 The Indian who's World Swimsuit model of the week 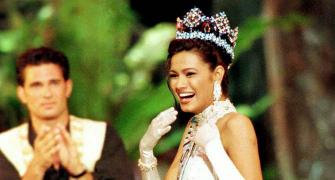 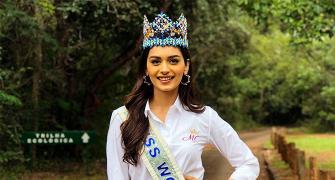 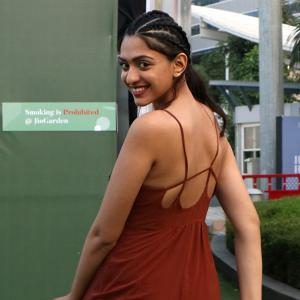