This is the story of a biotechnology engineer, who at age 22 founded Terra Greens Organic -- a company that aims to engage at least 10,000 farmers in organic farming in the next one year.
Likitha Bhanu shares her journey with Rediff.com's Shobha Warrier. 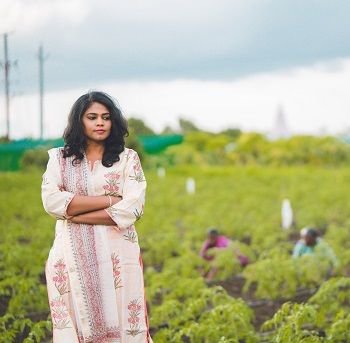 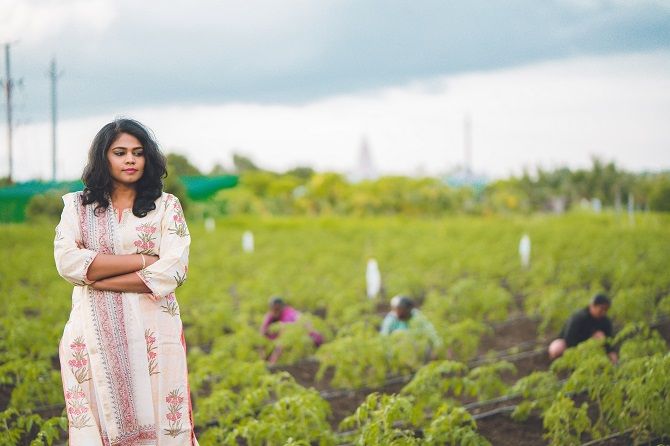 Likitha Bhanu, 27, a biotechnology engineer from the Vellore Institute of Technology, doesn't come from a family of farmers or entrepreneurs.

Her father and her grandfather were civil servants. Both happened to her -- no pun intended -- quite organically.

What began with a particularly good bounty of mangoes from her mother's trees one summer has today grown into Terra Greens Organic, a company that supports 4,000 farmers from all over India.

Likitha shares what drove a then 22 year old to agriculture and how she turned a season's bounty into a flourishing organic farming business that is engaging thousands of farmers and thousands of acres of land spread across many states.

It began in the tea gardens of Assam

As her father, a civil servant, was posted in Assam when Likhita was young, she grew up in the lush green surroundings of the north-eastern state made fertile by the river Brahmaputra.

Her childhood was spent running around in the tea gardens and fishing on the banks of the river -- something no child experiences in a metro city.

But living in Assam had one disadvantage for the family from Andhra. The kind of vegetables they were used to were not available in the north-eastern part of India.

Likitha's mother Padmaja, an early advocate of home grown vegetables, made up for the lack by channeling her love for growing.

"As my mother was an advocate of organic farming," Likitha remembers, "you can say I grew up watching my mother attending to all the plants she had planted.

"She was very particular that we grew up with a taste for our traditional Telugu food. It is not that as a child, I just ate the vegetables picked from my mother's garden. We used to pluck vegetables, take care of them and my mother used to see that we learnt about each one of them."

"As a child, I used to be fascinated by how cabbages and cauliflowers became what they are finally."

When the family moved from Assam to Hyderabad, Padmaja decided to plant a bigger farm. This one was spread across 2 acres.

She not only grew fruits, vegetables, and flowers, but also kept cows and hens.

"It was so self-sufficient," Lithika says, "that even the flowers she used for puja came from her farm. We had organic milk, organic vegetables, organic fruits and even organic eggs and chicken at home. She wanted a self-sufficient eco system around her so that we didn't have to buy anything from the market."

"The produce from the farm was distributed among other family and friends," she says, pointing out that Padmaja never had any plan of growing this into a business.

"Organic farming was her passion and I grew up seeing her do all this passionately."

Soon the 2 acres grew to 40 acres -- the additional land came from Padmaja's father-in-law, who was constructing villas on 125 acres of land.

The produce from the 40 acres Padmaja cultivated catered to the guests at the villas. And Padmaja continued to gave away the vegetables and fruits for free. IMAGE: What makes Terra Greens work, Likitha, right, believes is the farmer-entrepreneur combination -- while she likes to be an entrepreneur, Padmaja, left, still calls herself a farmer. Photograph: Kind courtesy Terra Greens Organic

In 2010, Likitha was back home after earning her biotechnology engineering degree. And it was she who decided to convert her mother's passion into a business.

"It was 2012 and I had taken a break and was at home," Likitha recalls. "We had a bounty crop of 5 tons of mangoes then. Even after distributing to all our family and friends, there was plenty remaining."

"After a shopping visit at a branch of Nature's Basket, we asked the store manager whether he would take some mangoes from us. We didn't want such good mangoes to go waste. In those days, no stores here had organic mangoes."

Once they got the orders, they went to the wholesale market, bought pouches, a weighing machine, and packed the mangoes.

For the name, they drew inspiration from Likitha's grandfather's real estate firm, Terrafirma. They borrowed his logo and Terra Greens Organic was born.

"The truth was," Likitha says, "we had no idea whether we would start a business at that time. The immediate plan was to supply the mangoes with a label, and since my grandfather had the firm Terrafirma, we just made Terra Greens Organic a part of it."

The mangoes became such a huge hit that they were inundated with phone calls demanding more such fruits.

They also made around Rs 350,000, motivating Likitha to wrote a business plan with her mother.

The business plan was to bring farmers on board, and also be focussed on the staples business and not in the greens because of the logistical and shelf-life constraints for the latter.

The experts they hired advised them to start in Rajasthan and Maharashtra.

Likitha explains their process: "We chose Maharashtra because organic farming is quite advanced in the state. Rajasthan is known for its organic wheat production. Paddy from Kurnool is famous all over the country. More than that, the farmers (in those states) are also aware of organic farming."

"We made a list of 90 products that are often used in Indian kitchen. We wanted to procure our produce from the areas where they are produced because we wanted out products to be of the highest quality."

Five hundred small and big farmers from Maharashtra and Rajasthan participated in the venture spread across a cumulative 700 to 800 acres of land.

"The contract with the farmers was such that we assured them a buy back guarantee offering the market price. We also got them the certification and the farmers gave us the first buyer and the best buyer advantage," Likitha says.

They got the first organic crop from their farms in 2015.

"You need patience to convert farms that had used chemical fertilisers to organic farms," Likitha explains.

"We had to wait for three years to have our own products. Till then, we procured organic products from various traders."

While buying from traders and selling, instead of getting produce from their owns farms, kept the profit margin low in those years, the budding entrepreneurs used those years to build the brand and distribution network.

It helped that awareness about organic food also grew simultaneously.

"Today, people like to eat healthy, uncontaminated food and they are ready to pay a little more for that," Likitha says. "They don't want to compromise on health and nutrition."

And, according to her, the only reason why organic products are costlier is because the demand-supply equation is lopsided.

"The supply of genuine organic products is quite scarce in India. That is the main reason why we want to convert as many farmers as possible to organic farming. Only when we have more produce, the prices will come down. Also, certification for organic products adds to the cost."

As the business grows, Likitha and Padmaja are also beginning to feel more like businesswomen.

"Though both of us were the founders of Terra Greens Organic, it is only recently that we started describing ourselves as the founders," Likitha says with a laugh.

Terra Greens started its association with farmers by training them in organic farming and also making them understand the how it benefits the soil, the crops and the people.

"All the farmers were open to the idea of organic farming and in some states where the government itself was popularising organic farming, like Maharashtra, it was quite easy," Likitha says.

The problem the farmers faced was the market.

"They didn't know where to sell their products. Though the government encourages organic farming, they don't help them reach the market. If the farmers have to sell the organic produce at the normal market, it is not a lucrative proposition for them. So, what they found attractive about us was, we gave them a buy-back guarantee."

Likitha believes today, the farmers have understood the advantages of joining Terra Greens and moving to organic farming.

"Their land got better because of organic farming and they get better price without any break, They are happy that they do not have to go to the market in search of a buyer as they have us as the dedicated buyer," she says.

"Naturally," she adds, "we feel their lives are also changing for the better. We form farmer groups and farmer meets where they can exchange views and problems and our team helps them solve the problems."

Today, Terra Greens has 4,000 farmers from Maharashtra, Rajasthan, Tamil Nadu, Karnataka and Telengana working for them and the products are distributed through distributors in 600 major stores in India.

With a turnover of Rs 15 crores (Rs 150 million) this year, Likitha plans to expand to 10,000 farmers by the end of this year, which will include farmers from Madhya Pradesh, who cultivate the sharbati variety of wheat, more millets from Tamil Nadu and more ragi and millets from Karnataka.

The farmer and the entrepreneur

Likitha acknowledges that the journey has not always been smooth sailing.

"The biggest challenge from the business point of view was to get the supply chain smooth," she says. "I was just 22 when I became an entrepreneur and my mother and I learnt everything from scratch and by trial-and-error -- how to manage people, how to negotiate, how to run the company. But we did learn a lot in these three years."

The other big challenge, according to Likitha, was "getting into a very male-dominated, family-run agriculture business. Trade of food grains is an old business and it is majorly run by families and male members. And there I was -- a woman with no business background."

"Those in the trade refused to treat me seriously in the beginning. But it did not deter me; rather it amused me. Soon they realised that we meant business!"

What makes Terra Greens work, Likitha believes is the farmer-entrepreneur combination -- while she likes to be an entrepreneur, Padmaja still calls herself a farmer.

"Everybody has to realise that in India, we have 1.5 billion mouths to be fed and only farmers can do that," Likitha says.

"We tell our consumers to respect our products as they are the result of somebody else's hard work. They shine in our packets because somebody worked hard in the fields."

"Agriculture," she adds, "is in distress today, and the stress that has to be given to farm labour and agriculture is not given. Still farmers are willing to take it up if somebody is there to give them a helping hand."

"That is why we are proud of being associated with so many farmers.

"We want to make sure that their hard work gets appreciated and they get what they deserve. I feel responsible for them. I want to see to it that every farmer associated with us gets the best price and the best market." 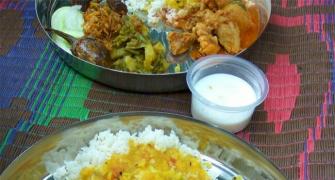 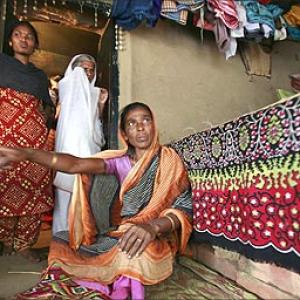 Images: A day in an Indian farmer's life