'At home, being vegan is no real problem, and other than dairy (dahi, chhaas, ghee and kadhi) I can eat normally.'
'There is, of course, the eschewing of meat and as someone who likes (should I say liked?) Naga pork and beef steaks, and has eaten snake and dog, going vegan is unusual,' says Aakar Patel.
Illustration: Dominic Xavier/Rediff.com 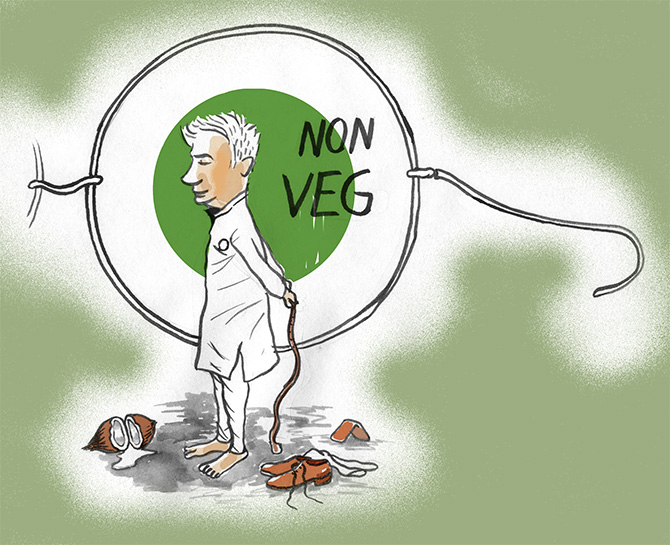 Vegetarianism is linked inexorably to purity in India. We are the only nation that uses the word 'non-veg'.

J Krishnamurti once described a ritual he followed as an experiment.

Every morning, after he'd bathed, he would formally offer a flower to a rock and fold his hands before it for a few moments with his eyes closed.

If I remember it right, he didn't say any prayer while doing this. And it wasn't a special rock, just some random stone he had picked up.

Indeed, its ordinariness was the whole point. He wanted to observe the process of ritual in religion.

After exactly a month, as he had planned, Krishnamurti suddenly stopped the ritual.

What he noticed was a sense of discomfort. The mind was used to the ritual, and in its regularity it offered some semblance of satisfaction and fulfilment.

Ending it produced unease and perhaps longing, even though the action had been choreographed by the same individual, who understood that the ritual was bunkum.

The director Shekhar Kapur also described something similar when he was shooting for the movie Elizabeth.

Starring Cate Blanchett and, in a bit role, Daniel Craig, it was shot by a mostly European and American crew in Durham Cathedral.

Kapur says that as an Indian director he would open every morning's shoot with the cracking of a coconut for luck.

Kapur said he did it purely out of habit, but in time, the whole crew internalised the practice.

Kapur says that later, when something would go wrong, for example if something broke down or it wouldn't stop raining, he was surprised to learn that the crew would earnestly ask themselves if someone had forgotten to break the coconut that day.

I'm writing about this because I'm going through something similar.

A couple of months ago, I turned vegan, which means no animal products.

When asked why, I say that I don't like how animals are treated.

The discovery of their treatment came through a book by Yuval Noah Harari called Sapiens and I recommend it strongly to readers, and not just for its chapters on animals.

At home, being vegan is no real problem, particularly for an Indian, and other than dairy (dahi, chhaas, ghee and kadhi) I can eat normally.

There is, of course, the eschewing of meat and as someone who likes (should I say liked?) Naga pork and beef steaks, and has eaten snake and dog, going vegan is unusual.

I am therefore questioned about it often by the people who know me and my response is always the one I referred to above: I don't like how animals are treated.

Though I follow the rituals of veganism in sacred fashion (I carry a magnifying glass to inspect ingredients and I return airline food after reading things like '2 per cent milk solids'), I don't proselytise it, and thus the brief response to queries of 'why'.

The reason for this is that I am, and I think all vegans and vegetarians should be, mindful of the fact that we exist in a particular culture.

Vegetarianism is linked inexorably to purity in India.

We are the only nation on earth that uses the word 'non-veg' (this is a fact, I have checked with air crews serving passengers around the world and they verify it).

Caste and meat are intertwined and if I am to reject that aspect of Hinduism, and I do, I must be open to serving meat to those who prefer it, and I do.

I also have no problem, in keeping with that, in taking the sauce or gravy off someone else's plate of meat.

For me, it's not about purity.

But even though I am mindful of such distinctions, to return to the subject we began with, I have noticed in myself a fervour for veganism that approaches religion.

It began with the basics of food and now the only dessert I have, or can have, is a spoon of peanut butter or some fruit.

Being vegan is not to be on a diet but to reject animal products of all sorts, including in clothing and so on.

And so I have stopped using off-the-shelf toiletries, soaps and shampoos, because they are usually tested on animals.

Aftershaves and colognes are also gone for the same reason.

I use, in case you are curious, a block of alum (phitkari, used by traditional barbers) as both aftershave and deodorant.

I've stopped using a regular razor and shaving cream and use an electric razor instead, and a paper wallet.

The point is that I am becoming aware of a mounting desire (is the word fanaticism?) in ensuring that I am staying vegan.

Last month, my car was sent to the upholsterers to fix a couple of patches that had come undone. The workshop told me what it would cost and I approved it.

Then I called back and asked if they could do it in rexine, instead of leather.

The surprised answer was that they could, but why would I want that in a car whose entire interior was already leather, they asked.

I mumbled something, but told them to stick to rexine and felt the better for it.

There is some element of pragmatism that I follow.

For instance: What does one do with things already bought?

Leather shoes and belts and jackets, and coats and socks made of wool.

My answer is to use the ones I have already bought, but to stop purchasing new ones.

This in turn has produced an instinct to stop purchasing things entirely.

All things, other than those that are absolutely necessary, like fuel (I've begun using my bicycle more often) and food.

It springs from the same sentiment, I think, which is to keep reducing one's impact on the external world, however fanciful such thinking might be.

I read a report in June of the 12th standard topper in Gujarat, a Jain, who was taking diksha and giving up the material world.

The report said his family rejected the use of electricity because power generation killed aquatic animals.

This thought of animals being slaughtered by turbines turning in water doesn't occur to most of us. But I can now understand the sentiment they feel, and I empathise with it. This worries me.

I wonder if what I think of as being a moral pursuit is turning into a mindless religious one, powered along by the need for strict observances.

Like Krishnamurti or Kapur discovered, awareness is not defence enough and the desire for ritual overwhelms reason. 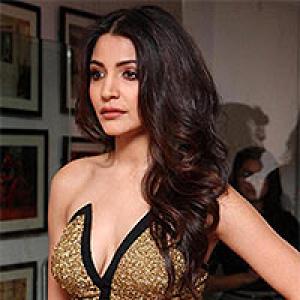 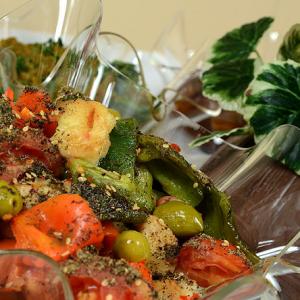