News
Business
Movies
Sports
Cricket
Get Ahead
Money Tips
Shopping
Sign in  |  Create a Rediffmail account
Rediff.com  » Getahead » When your own car is on loan...

Due to unavoidable circumstances, Kishore Singh is forced to become an Uber convert.
Illustration: Uttam Ghosh/Rediff.com 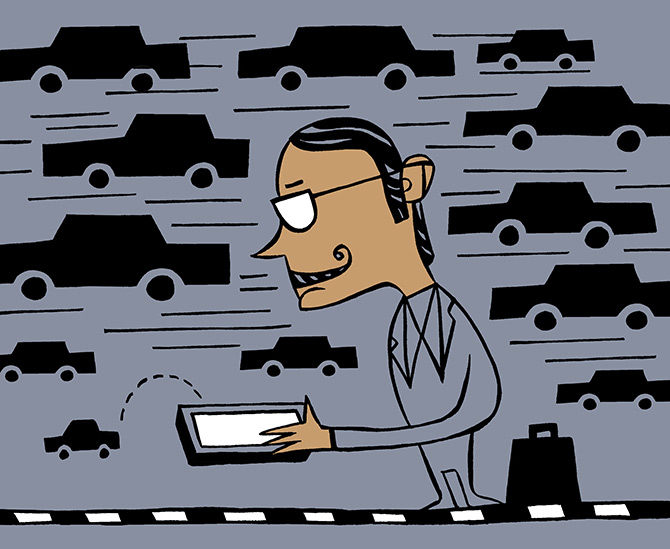 If I'm an Uber convert, it's not because I prefer cramped seats and smelly cabins, but because I can reasonably depend on the service.

Of course, there was the time when someone else made off with my confirmed Uber booking even as I watched it do a U-turn on my mobile screen and move away from where I was waiting.

When I rang up the driver to complain, he pointed out that it was the passenger's fault for claiming to be someone he was not -- er, me -- and handed his phone to the guilty party.

The culpable passenger pleaded being late for a flight, and suggested that I extend him the courtesy of the loan of the taxi.

I'm happy to report that the cab driver chose to dump him in the middle of the road and came back to collect me.

Which is something my driver wants to do, too, but keeps getting foiled by my wife.

It all begins innocently enough. "Sweety," my wife will say, "can I borrow your driver to take me to the grocery store while you finish up breakfast?"

It sounds a reasonable enough request, but my wife is an overachiever and never quite content with crossing just one chore off her bucket list at any one time.

The last time she purloined my car to "pick up some tomatoes from Mother Dairy" just round the corner, she also made a pit stop at a construction site to fill a bag of badarpur for her precious plants; decided to wake up Sarla and share a cup of morning coffee and gossip with her; had the driver pull up at the neighbourhood mall because it wasn't likely to be crowded in the morning; and found that the new salon there carried her hair colour so booked herself in for a treatment.

When she was finally done, after I had called her a half dozen times and was two hours overdue at work, she said, "Can't you just take a taxi, darling, it'll be so convenient if I can have the car and chauffeur to take me to my kitty lunch?"

We fixed it so that my car and my chauffeur would come to the office in the afternoon, so I could have his services for when I had to step out for a meeting.

Of course, I took an Uber to my appointment, and another one back. And yet another to come back home in the evening.

I arrived back to find my wife in a temper, so the subject of the absent car and driver were conveniently avoided.

In just the past week, I've had to wait over an hour at the airport "because I stopped by the hospital to see your friend", she informed me; been asked by her to take a lift to and from office with a colleague who doesn't live close by; been abandoned at work because she decided to go say hi on a whim to a visiting schoolfriend in Manesar instead of picking me up; and lied about how far she was while I waited outside a hotel from which she claimed she was no further than "a couple of minutes, bas" that stretched to 45 minutes.

She's also a car glutton, wanting the driver to requisition our son's car one day, our daughter's on another, the neighbours' on still others, so she can visit in what she hopes her friends will think is her fleet of cars, while the rest of us... 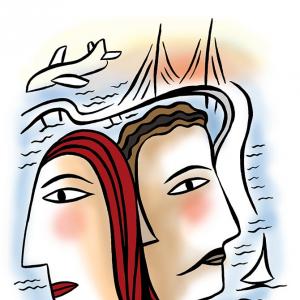