'On presents, deciding what will pass muster, considering the closeness of the people concerned and the state of the wallet, is one headache,' says Subir Roy.
Illustration: Uttam Ghosh/Rediff.com 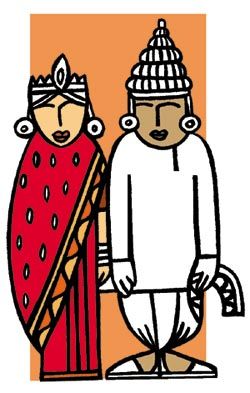 As the month closes, it has been a period of growing misery for people like us. What is worse, the first month of the new year will be the same. No, we are not suffering from want or deprivation, we are groaning under the weight of excessive celebration.

Earlier there was a division of space between two contending claimants -- year-end dos and weddings. The Hindu calendar forbade marriages during the month of Pausha -- roughly mid-December to mid-January. So you attended all the wedding feasts (you can't have one without the other) you could stomach till mid-December and then switched to the year-end dos.

This involved celebrations and gorging till Christmas eve, then a couple of days' respite, to be followed by more celebrations climaxing with New Year's Eve. The next fortnight was again partially spent in recovery and from mid-month it was wedding season again.

But this arrangement has been disrupted by two social developments. One is the growing institution of NRIs among friends and relations for whom this is the time of the year to come home. To get round the hurdle of this being an inauspicious time for marriages, the event is broken up into two parts.

One is a civil marriage which can be solemnised anytime anywhere. The other is a reception which is, of course, totally social. Some even throw in a religious ritual, courtesy helpful priests who are ever ready to dispense dispensation.

Second is the invasion of North Indian practices. Earlier a marriage used to consist of at most two events -- the actual wedding at the girl's end and a reception at the boy's end.

Now have arrived institutions like Sangeet, Mehendi and the Ring Ceremony. This is not counting the Ashirwad which earlier used to be a small affair limited to close relations, but is now held with drinks and khana.

Hence, lately my family and I have repeatedly run into locally more rooted friends and relatives than us groaning that they can't take the toll on their time, energy and the stomach anymore. But for me the amusement has turned into perplexity when the groaning has stretched to having to take care of too many presents.

On presents, deciding what will pass muster, considering the closeness of the people concerned and the state of the wallet, is one headache. The other is, actually going out and buying the present which is time consuming.

One way out is to give cash. But the problem with cash is it has to be of a respectable amount. It works out cheaper, so the women folk say, to pick up something cute at a Cottage Industries emporium. But for that you need time and energy!

One way out, it has been confessed to me, is to recycle presents. Repackage and pass on what has come in during an event of your own. Experts can now easily spot a recycled present. There is a whole clutch of typical, good looking semi-useless little things which are good for nothing except as respectable presentables.

I have also been told that an absolute unmentionable new trend is recycling without even taking the trouble to repackage.

Some time ago, invitations began to have a disclaimer at the end: 'No presents please.' But absolutely nobody listened, partly because of uncertainty over whether others would take the request seriously.

The latest is a new kind of disclaimer, arising out of NRIs' inability to cart things back home: Hence the new disclaimer: 'No box presents please.' Some find it not in total good taste; some are uncertain about whether it is proper English.

My recent experience at a reception hosted by a well-known, highly respected, city doctor to share the joy over the arrival of his first grandchild is worth retelling.

His young idealistic daughter, also a doctor, and her Scottish husband said absolutely no no to receiving presents. They also wouldn't touch cash. So the invitation disclaimer said in effect: If you must give something, donate it in the baby's name to some charity of your choice.

That should have ended all confusion. But no. The reception witnessed an improvised subtle ritual. The grandma carried a large open handbag into which women came and kept shoving envelopes, obviously containing cash.

I asked the wife what would her uncle, the big doctor, who had more money than he cared for, do? She said, if she knew him, he already must be supporting several charities to whom the cash would go.

Until the wife of a close friend told me: 'Look, you better start coming with presents, as, whether you like it or not, we will come to your wedding with presents.' I was suitably chastened and thereafter fell in line. 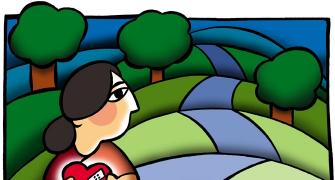 Wedding diary: Amma's advice on what makes a marriage last 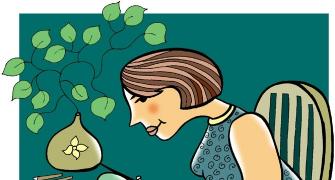 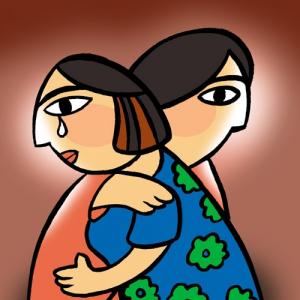 Wedding diary: Amma, I'll miss you the most!