'Test cricket is so fortunate that today's cricket's biggest brand -- Virat Kohli -- loves Test cricket and puts his heart and soul into it,' says Sanjay Manjrekar.

Former India batsman Sanjay Manjrekar, who delivered the ninth Dilip Sardesai Lecture at the Cricket Club of India in Mumbai, October 1, believes immediate steps need to be taken to save Test cricket.

In the final segment of the lecture, Manjrekar reveals why he wants the administrators to introduce day-night Test matches to draw more crowds while coming hard on slow over rates, which is making the sport lose appeal with the millennials. 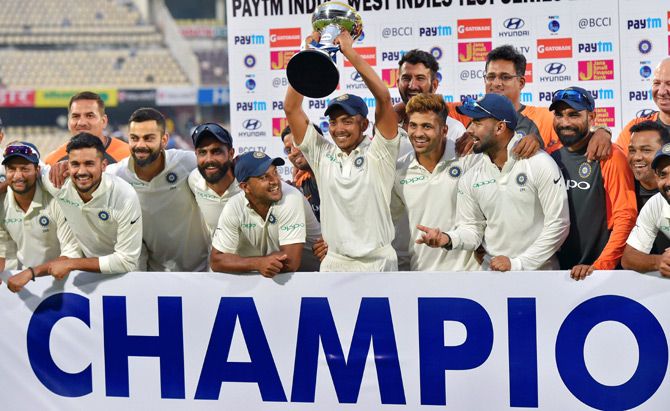 IMAGE: 'To my eyes Virat Kohli looks most driven when he is playing Tests,' says Sanjay Manjrekar. Photograph: PTI

India's white ball cricket was going in the right direction, but somehow the bane of the 90s, the overseas issues in Tests, remained, somehow Indian cricket has not been able to resolve this.

A much weakened Pakistan still has a better record than India in overseas Tests.

India have just come back from a 4-1 defeat in an overseas series (in England), yes, the score line is not indicative of how the actual contest was but still it's another overseas loss for India to endure.

Interestingly, it was the batting that let India down this time, the bowlers kept getting India back in the match and the batsmen kept letting those chances slip.

It wasn't temperament that was letting these batsmen down in South Africa and in England, it was purely a technical problem, specifically defensive technique.

It was simple to see what was going wrong, the batsmen were not leaving enough balls outside the off stump nor were they defending close to the body with a still bat.

Now this is the easy part, its easy to spot such faults but how do you rectify it?

Now that's where it gets complicated because this is now more a cultural thing and it's damn difficult to change cultures as we know.

'It's not that there is zero interest in Test cricket, just that people can't come to the stadium to watch cricket or for that matter watch on TV.'

Today Test cricket is played in front of empty stands and IPL in front of a frenzied crowd of 50,000 plus millions watching on TV.

And guess what? It pays better too, infact a lot better!

We have a reversed scenario now from the '90s, its about playing the IPL at all costs, player injuries now surface only before and after the IPL. 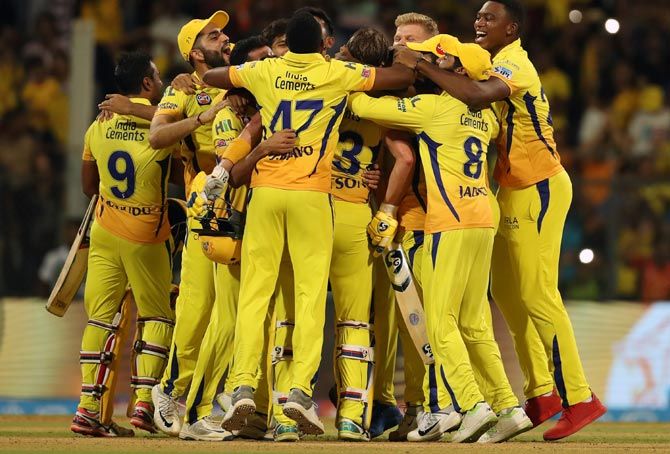 IPL offers you fame as well as money. Now, who will say no to this?

Also Test cricket is just too goddamn hard, so it's no wonder that many are choosing T20 leagues over Tests.

Playing for the country and all that is an emotion that one feels only when it's an ICC event these days.

There is such random, meaningless country versus country cricket going on that playing for the country is not that big a deal anymore nor a matter of great pride like it used to be when matches were fewer.

Also I cringe a bit when players talk about doing it for the nation and stuff when they are actually playing sport.

So more and more players are training themselves to become good white ball players.

When we were growing up our mind space was occupied by only the long format game, we trained for it day in day out, practised leaving balls outside the off stump and the coach behind shrieked in delight saying 'Well left' and we felt vey proud for having left a ball alone, offered no shot.

This aspect of batting is hardly seen nor even needed in white ball cricket, I wonder how many balls were left alone by batsmen in the 11 editions of the IPL so far? I am guessing only 12.

Why train so hard for something that only a few people watch and does not pay as much? A good analogy of this is pure classical singing, it's the Test match of singing.

The world is ever-changing and with it the tastes of people. This is what you call natural forces coming onto play, and there is nothing anyone can do to stop that.

But try we must.

For if not for Test cricket, how do we know who are the men from the boys??

It is here I feel Test cricket is so fortunate that today's cricket's biggest brand -- Virat Kohli -- loves Test cricket and puts his heart and soul into it.

To my eyes he looks most driven when he is playing Tests.

Don't get fooled by the crowds you see in England for Test matches, that's an aberration. England loves its heritage, they like holding onto the old, royalty for example, they are still so excited by it in the 21st century, so these guys are unique in their tastes and choices.

I travel the cricketing world and see cricket loving countries struggle to draw crowds for Test matches, but we can, and have to clutch at straws, to keep Test cricket alive.

Through social media etc we see a lot of young cricket fans follow Tests, they understand and value the uniqueness of its unpredictable script that other formats can never match.

And yes, Test match performances and results are remembered for a longer time and resonate much more than an IPL 50 which is forgotten in 48 hours.

It's not that there is zero interest in Test cricket, just that people can't come to the stadium to watch cricket or for that matter watch on TV.

That's because we are, and I use the word 'cocky' in the sense that we have kept the timings of Tests exactly the same as people's working hours.

Gone are the days when people used to bunk office and fill every seat at the Eden Gardens. It is time to be humble and offer Test cricket to the fans as per their convenience. 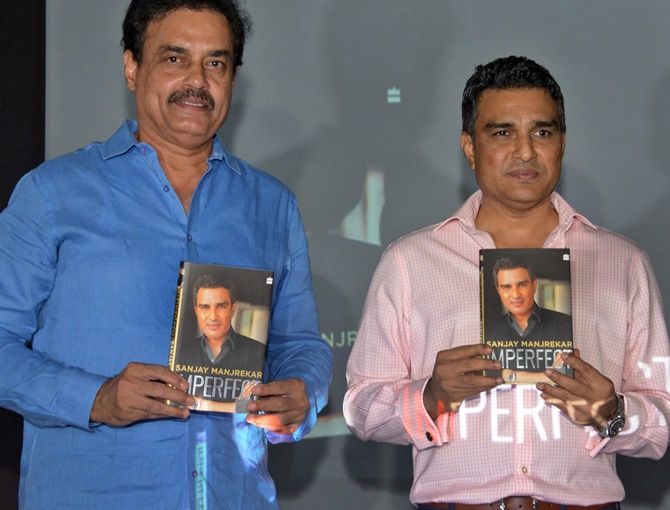 IMAGE: Sanjay Manjrekar made his debut in the Delhi Test against the West Indies under Dilip Vengsarkar's captaincy in 1987. Photograph: PTI

The only way to get more people to watch Test cricket, increase its viewership, its popularity and thereby its quality is DAY NIGHT TESTS.

And that brings me to my final stretch of this lecture, about taking the bull by its horns.

Why aren't we playing more Day-Night Tests when it is a no-brainer that it will draw more viewership?

Because the players are wary of it, wary of the pink ball, the dew factor at night etc.

I have always believed conditions are never unfair if it is the same for both sides.

Who wouldn't know this better than Mumbai cricketers who played in the Kanga League when along with the ball you sometimes had to handle muck that came flying with it.

So what's basically happening is that we want to give perfect conditions for the players to play in, even if it means, no one is watching.

There was a time when players -- at least Indian players -- were at the mercy of the BCCI. The relationship between the players and the board was uneasy for a long time. Remember the clashes over salaries etc in 1989?

Thank god, all that is in the past. But we must be careful to not go the other extreme and try and keep players happy come what may, or at the cost of the game.

Take the bull by the horns, I say. Nobody seems to do this anymore. Do what is best for the game, for its long term health and make the players join in, even if they are reluctant. They will thank us later for this.

As a player, I too, had a much narrower vision of the game than I have now.

While you are at it -- that is, taking the bull by the horns -- here is another one. For God's sake do something about the over rates!

The amount of milling around that goes on on the cricket field is not funny. No way will this sport find appeal or connect with the youth of today when most of the time they are seeing players walking and standing and having drinks and thus having a devastating effect on the over rates.

Yes, that's my bug bear these days -- over rates.

The Asia Cup final went 40 minutes over time!!!! I say, how dare we take people's time for granted like this.

We now have an extra 30 minutes for a fielding side to bowl its quota of 90 overs for the day in Tests because they find it difficult to do it in the stipulated time. And if they are still unable to do it, we say ok, let it be. It's like a tuition teacher who wants to keep his job tutoring a rich kid.

So, essentially what happens is that the paying public is sitting an extra 30 minutes and have still not got the 90 overs in the day they came to watch. Some day they may ask for a refund for not getting what they were promised.

The slow over rates I am afraid is entirely to do with players being allowed to have their way.

Maybe we could have a tennis-like system where they have a timer in between games when players take their little break...

In cricket it can be overs, where the captain is prodded to start the next over and penalised if there is a delay.

Whatever works really we must make the game move on faster to stay relevant in today's world when people are eating fast food and seeking faster downloads.

Basically officials need to get a little more officious and yes, strict. Not as strict as the school cricket umpires that we had, the stone faced, dictatorial kind. I used to think only a whip in their hands was missing.

The fact is there is just too much leniency given to players these days. Hydration is the new thing, so you have players taking drinks in every little pause the game has.

A wicket falls in the first over of the day, the substitutes rush in with drinks for the fielding team.

The official drinks break is taken just after everyone has had a drink a few minutes back during a review.

These days I am worried that a player may get sick because of excessive hydration. I seriously wonder if players today know the feeling of playing while being thirsty.

I know keeping your water levels up is important but I also know that a cheetah runs quickest when it is thirsty and hungry.

I guess what I am saying is that cricket is not a fast growing sport like say golf. It is facing increased competition from other sports that vibe better with today's sports lovers and that's slowly happening in India too.

It is vital that we are on the ball, keeping a close watch on how cricket is being consumed by the market and react accordingly.

To thrive in the coming years cricket needs the pragmatists more than the romantics.

And there is one simple way to achieve that. PUT THE CRICKET FAN ABOVE ALL AND WE MAY JUST BE OK.