News
Business
Movies
Sports
Cricket
Get Ahead
Money Tips
Shopping
Sign in  |  Create a Rediffmail account
Rediff.com  » Cricket » 'My destiny was to write about the game'

'That has always been my ambition -- to take the reader behind the scenes, to the places he was not allowed to visit, but which I had the privilege of entering.'
Haresh Pandya remembers Ted Corbett, sports journalist extraordinaire, who passed into the ages on August 9. 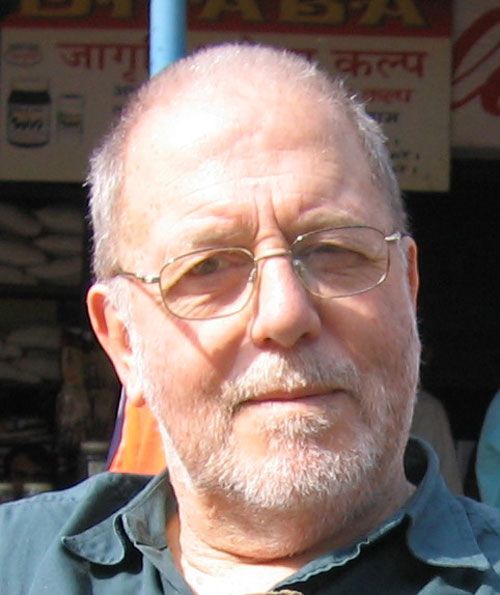 Although he owned a famous surname, Ted Corbett, who died August 9 at Huntingdon in Cambridgeshire in England, was "certain" he was not related to Jim Corbett, the famed boxer or the hunter.

In keeping with the renowned surname, he had done so much in his chosen field and won universal acclaim.

He became a distinguished and highly respected sports journalist and built a reputation for himself in India, writing cricket columns with his regular contributions to The Hindu and its sister publication, Sportstar, for well over two decades.

"The boxer and the hunter were both Irish and my family are from classic Corbett country near Birmingham, where I was born. Everyone in India seems to want me to be related to the hunter/naturalist, but I make no such claim," he once told me.

Ted Corbett was born in 1935 and brought up in the county of Durham. His mother was a schoolteacher, his father worked in the sports department at a large store.

When World War II ensued, the mother and the son were evacuated to a small village near Leicester; his father joined the army.

"My father did not rejoin us at the end of the war and we have not heard from him since," he recalled. "We were war victims just as much as those killed on the battle front."

While his grandfather was a Birmingham City footballer and his father played golf for Warwickshire, some of his cousins and maternal uncles excelled in league cricket in Yorkshire.

"All in all, I guess, since I was not more than an average sportsman, my destiny was to write about the game," he remarked.

He did. And beautifully and prolifically at that.

Rugby, soccer, snooker, golf, athletics and, of course, cricket are among the major sports he covered and wrote about.

By 1946 his mother was the headmistress of a primary school in a small Yorkshire village and young Ted showed some promise as a writer. The editor of the nearest newspaper hired him on an apprenticeship when he was 16.

Corbett vividly remembered having watched his first international match, enjoying Clyde Walcott's several mighty sixes when the 1950 West Indies side played the Minor Counties at Sunderland just down the coast from South Shields.

After he wed a Japanese lady he joined the sports department of the Evening Press in York. He progressed to report the local rugby team's activity mainly because he had played -- "very badly" -- alongside many of the youngsters in amateur rugby.

In 1963, he was offered a job on the Daily Herald and two years later he joined the Daily Mirror.

"Those days the Mirror was selling five million copies a day and was considered the greatest newspaper on earth," he recalled.

Corbett worked for the Mirror for two years and then another seven years in Manchester in the great days of soccer legends George Best, Bobby Charlton and Denis Law and the other Old Trafford of cricketers Farokh Engineer, Peter Lever, David Lloyd and the rest.

He left the Mirror in 1976 to join the Daily Star, where he rose to become its cricket correspondent.

In all, Corbett worked as a freelancer for more than twenty papers apart from the staff jobs he had on seven other newspapers.

During the fifth World Cup in the Antipodes in 1992, R Mohan, then at the pinnacle of his reputation as a cricket writer, learnt that Corbett was traveling to New Zealand to cover a match. He asked the Englishman to report it for The Hindu and Sportstar.

It was the beginning of Corbett's long association with the Indian media group.

His weekly cricket diary in Sportstar from England was popular; he had written such diaries on snooker and cricket in British newspapers as well.

He considered his innings in the print media "a most satisfying life" more so after he met the well-known cricket scorer Joanne King. The two lived together and trotted the globe and "found" their "happiness" in every major cricket playing country as well as visiting Japan -- where Corbett's son worked for seven years -- Hong Kong, China, Greece, Corfu, Malaya and the United States.

"I have loved India as much as I love all travel," he said.

"My great love has always been writing and that allowed me to make a mark and to write a book, which I invited R Mohan to help with," he added.

"I did not enjoy writing books. It is too much like hard work and for little reward," he complained.

Corbett, who "could not stand" Dickens and those other 19th century writers he was "supposed to admire so much" read many American writers with interest and admiration. But his own attempts to write novels never came to pass.

"Every man to his own taste, I guess. I get to 25,000 words and give up from lack of further ideas or idleness or the need to earn an immediate living," he said.

"I have had so many well-paid jobs that I do not know the inspiration derived from the noise of bills falling through the letter box," he added, "Natural laziness means I have always been too content with today to worry about making a reputation among intellectuals."

"One day, when I retire, I will turn to completing one of the three novels which I have begun, but not finished. I say, as an excuse, that when you write 20,000 words of sports each week, there is little time or thought left to pen anything else." 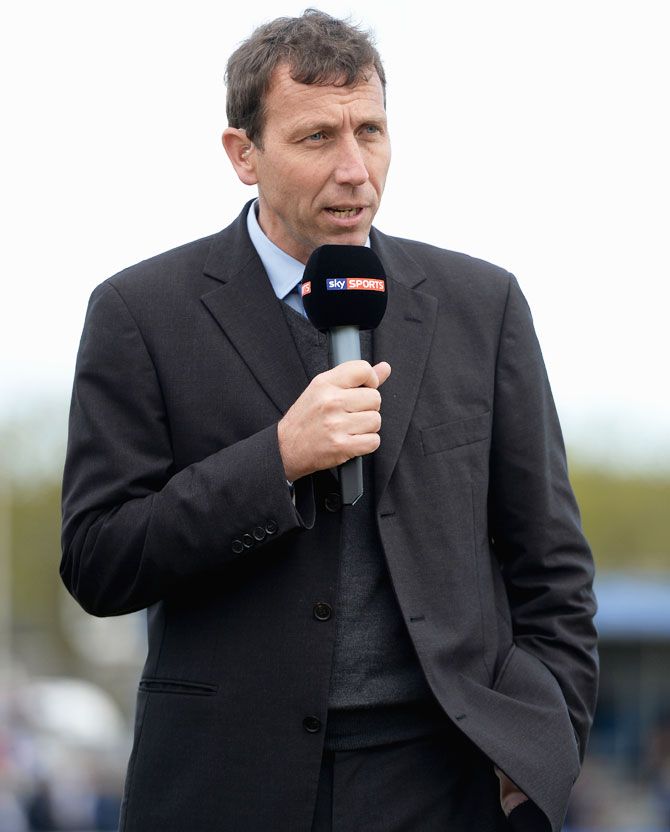 Corbett found C L R James's much acclaimed classic, Beyond A Boundary all but interesting.

"I have still not read Beyond A Boundary," he told me. "One day, I promise, I will read this important book. I was bored with it the last time I tried to wade my way through it, but I do the man an injustice by not trying again."

"Frankly I know less about his writings than I should, but his comment 'What do they know of cricket who only cricket know' should be glued to the front of every reporter's laptop as they tour abroad," Corbett said.

"It may be the most profound remark about cricket in which far too many of its inner circle seems to think that its laws, customs and mores would translate immediately to the rest of the world and that because a game can be governed by simple rules, so can the rest of life."

"I ought to have more sympathy with James for his radical political inclinations and mine are the same and he must have found it galling that so many cricket people are reactionaries."

Corbett's "biggest influence" as a writer was Thomas Babington Macaulay with his rolling three part sentences.

"My mother told me when I was perhaps 10 or 11 that Macaulay, who wrote books of ancient history, used tri-partite sentences, always with at least two dependent clauses. I find myself still writing in that way although I am a great admirer of Hemingway who wrote much shorter sentences."

"I always use Anglo Saxon words rather than those that have come down to us from Latin: 'Start' rather than 'commence', 'before' rather than 'prior to'. I rarely use brackets which I think of as old fashioned and I try to construct sentences logically so that pendant clauses fall in the right place," he explained.

"As for style, I believe every writer has to develop his own use of language and not be afraid to make mistakes along the way or be afraid to discard methods he finds unacceptable as he grows more mature."

Corbett always approached sports writing by trying to tell the reader something s/he would not, or did not, see at a match, by adding observations from the players or recounting a scene from inside the pavilion or dressing room or in the team hotel.

"That has always been my ambition -- to take the reader behind the scenes, to the places he was not allowed to visit, but which I had the privilege of entering."

"This necessarily means one must be discreet and even then it is often said one abuses a privilege by revealing what happens in the secret world," he felt.

"I realised when I joined the cricket circuit that there were many skilled journalists in the press box and that I had better raise my game," he said.

"There is still no one to beat Neville Cardus. In a different style Peter Roebuck was one of the greats because he did not rely on his knowledge of cricket, but studied people and went out to meet cricketers and incorporated their thoughts."

"He would have been my choice for the writer of the era and no one threatens to replace him although Mike Atherton, now on The Times, is making great headway."

In the same breath he rated John Arlott as the "finest" broadcaster but stated that the "modern men are a disappointment" even though he liked Bill Lawry for the simple reason that the Aussie "overcomes a poor style and bad voice because he is so perceptive and so quickly sees the outcome of a developing drama."

When I asked Corbett where Indian cricket writers differed from their English and Australian counterparts, his answer was expectedly diplomatic.

I will not make enemies by comparing Indian, English and Aussie reporters. I have too many friends among them and each nation has found men with different writing styles," he said.

"It seems to me that all Indian sports writing lacks anecdote which English journalists rate highly and comments about the players concerned from their close acquaintances and teammates."

"I try to employ both anecdote and quote in order to lift the middle of long articles and I also try to use the theme method. That is to say, I find a thought or idea or phrase at the beginning which reappears in the middle and at the end." 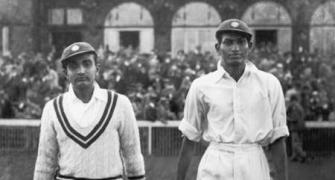 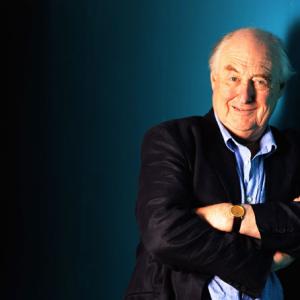 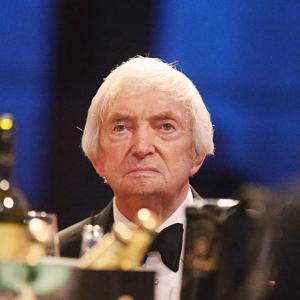