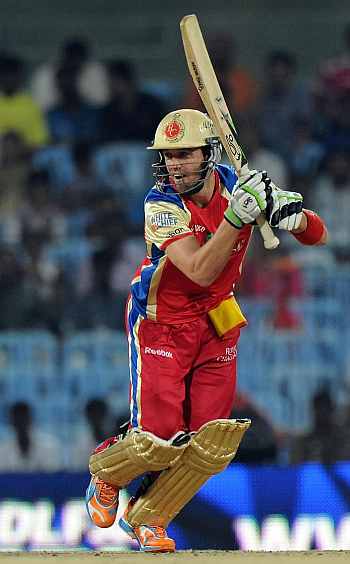 AB de Villiers might have turned out to be the hero for Royal Challengers Bangalore in their five-wicket win over Deccan Chargers on Sunday, but the South African instead lavished praise on openers Tillakaratne Dilshan and Chris Gayle for setting up the platform for the run chase.

De Villiers, who scored a whirlwind 47 not out off just 17 balls, helped RCB score 72 runs in the last 3.5 overs to overhaul Deccan's stiff target of 182 with seven balls to spare.

But De Villiers said if not for the 64-ball 91-run opening stand between Dilshan and Gayle, chasing the target would have been next to impossible.

"We collapsed a few times in the IPL before. So we needed our openers to build a foundation to launch a blitz right at the end which they did, and luckily I was there in the end to do the job," he said on Sunday.

De Villiers also credited young Mayank Agarwal for scoring quick 18 runs off just 6 balls, which according to him set the tone for the chase towards the end.

"Some of the players around me played amazing knocks. Mayank, above all, pushed the button by hitting two sixes and a boundary. He took risks even before I did. His knock set the game perfectly for me to finish off," he said.

'It was my night and I did it to perfection' 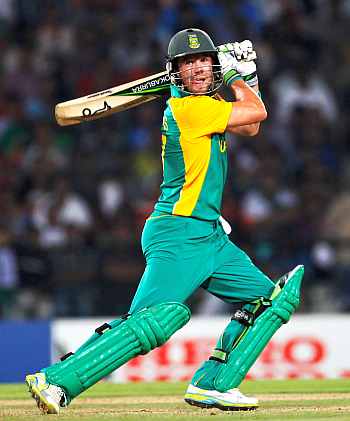 De Villiers, however, considered himself lucky to rip apart countryman Dale Steyn in the 18th over, which cost Deccan a whopping 23 runs.

He said he had overheard Deccan skipper Kumar Sangakkara's communication to Steyn before the start of the over, which helped him mould his game accordingly.

"Luckily I heard Sangakkara communicating to Steyn to bowl short of length at me, and I maneuvered my stroke accordingly. From then on I knew Dale would bowl fuller and played my strokes in anticipation," he said.

"However, Steyn is a world class player and could have knocked me over at any moment, but it wasn't quite the night tailored for him. It was my night and I did it to perfection," De Villiers added.

De Villiers said he played according to a game plan when he walked on to the pitch with the team still needing 80-odd runs off just 48 balls to win.

"I would like to be a guy who can adjust to different situations. I read the situation and knew we had to score 80-odd runs off 48 balls and I played accordingly. My game plan paid off tonight," the South African said.
Tags: Dale Steyn , Kumar Sangakkara , De Villiers , South African

'I learnt many things from Muralitharan' 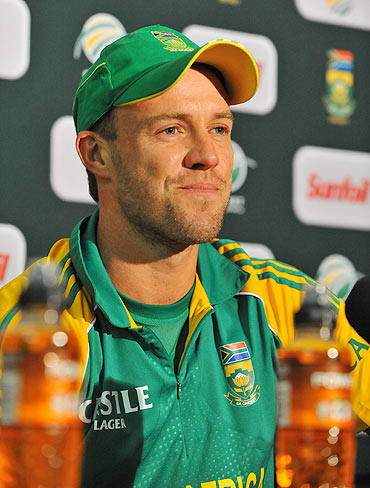 Despite scripting a tremendous win for his side, De Villiers was is no mood to bask in the glory as he feels there was a lot of work to be done to ensure RCB's place in the play offs.

"It is not over yet, we have a long way to go. This win has given us the required momentum, but we have to play some good cricket in the upcoming games. We still have to work on our bowling, fielding and batting," he said.

De Villiers also could not stop admiring Sri Lankan spin wizard Muttiah Muralitharan for keeping the team's spirits high even if he was not playing.

"Murali is probably the most valuable player in the IPL. He is a great man to have in the squad. He keeps our attitudes positive whether he is playing or not and that's a great quality in him. I learnt many things from him," he said.

Meanwhile, a disappointed Deccan skipper Sangakkara said he expected a more spirited effort from his bowlers to wrap up the game for the team.

"I thought 181 for two was a good score even if it was tough to defend. We should have wrapped up the game after getting wickets in death overs. We needed to hit yorkers, bowl straight and according to plan. We committed far too many mistakes," he said.
Tags: Muttiah Muralitharan , RCB , De Villiers , Sangakkara , OMurali
More
© Copyright 2022 PTI. All rights reserved. Republication or redistribution of PTI content, including by framing or similar means, is expressly prohibited without the prior written consent.
Write a
Comment
Print this
article