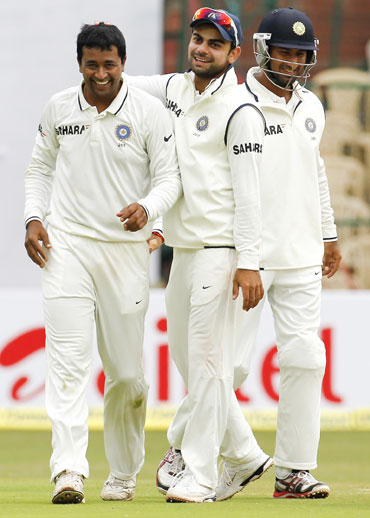 Suresh Raina, Virat Kohli and later Mahendra Singh Dhoni revived the Indian innings after an inspired bowling spell from New Zealand seamers reduced the hosts to 80 for four on the second day of the second Test in Bangalore on Saturday.

At stumps on Day Two, the hosts had reached 283 for five. Kohli was unbeaten on 93 and giving him company was his captain (on 46), the two having put on 104 for the sixth wicket.

The visitors, who opted to bat first after winning the toss, had added just 37 runs to their overnight score of 328 for six before India wrapped up the innings 45 minutes into the morning session.

Ojha, who had taken four wickets on Friday, polished off the New Zealand innings by dismissing Tim Southee leg before for 14.

He finished with figures of five for 99.

Kruger van Wyk made a valuable 71 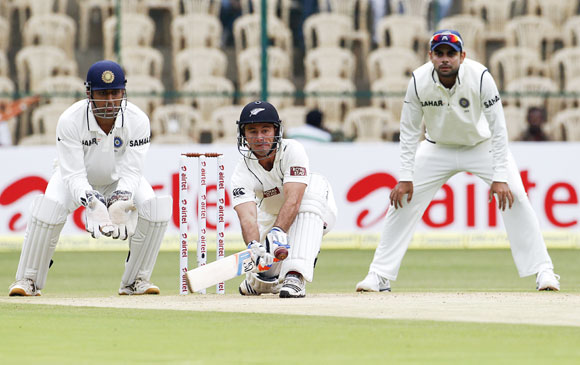 The first wicket to fall came when Suresh Raina took a diving catch at second slip off paceman Zaheer Khan to end an entertaining knock from wicketkeeper Kruger van Wyk for 71.

Van Wyk added 99 for the seventh wicket with Doug Bracewell, who was unlucky to be run out for 43 when the ball burst through Zaheer's hand to hit the stumps at the non-striker's end with the batsman short of his crease.

The partnership helped New Zealand get past the 350-run mark, an improvement after they made 159 and 164 in their two innings in losing the opening Test in Hyderabad by an innings and 115 runs.

Indian innings got off to a poor start The innings had not started well for the hosts with Gautam Gambhir (2), who looked uncomfortable during most of his short stay at the wicket, the first to be dismissed, clean bowled as he shouldered arms to an incoming delivery from Tim Southee.

Cheteshwar Pujara (9), a centurion in the last Test in Hyderabad, was then caught by Trent Boult at deep fine leg trying to hook Southee.

The Indian openers had a torrid time out in the middle as Boult and Southee used overcast conditions and moisture on the surface to their advantage.
Both swung the ball and put Gambhir and Sehwag in a spot of bother. Gambhir, who was lucky to have survived after Brendon McCullum dropped him on one in the slips, fell to a Southee ball that curved in and clipped the bail on way to the keeper.
Pujara fell to a Southee's gameplan in which the pacer invited him to hook the ball which landed safely in the hands of Boult at fine leg.
Tags: Tim Southee , Trent Boult , OCheteshwar Pujara , Gautam Gambhir , McCullum 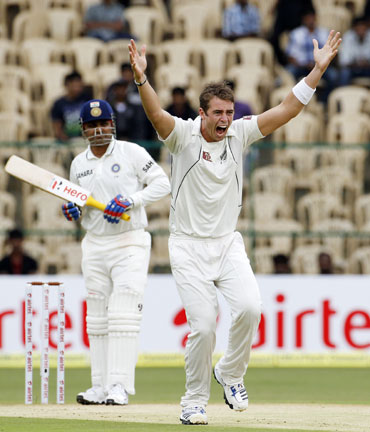 Virender Sehwag (43) hit eight boundaries and looked in good touch before he lofted a catch to mid-wicket off Doug Bracewell in the first over after lunch.

Sehwag, who survived a loud appeal for leg before off Southee early on, looked in devastating moods giving scant respect to the Kiwi pacers.

Giving momentum to the Indian innings after the hosts were in a spot of bother, Sehwag cut loose soon after Gambhir fell at the other end.

The aggressive right-hander made merry by flicking, driving and slashing hard at the deliveries bowled at him.

Tendulkar's was a painful innings 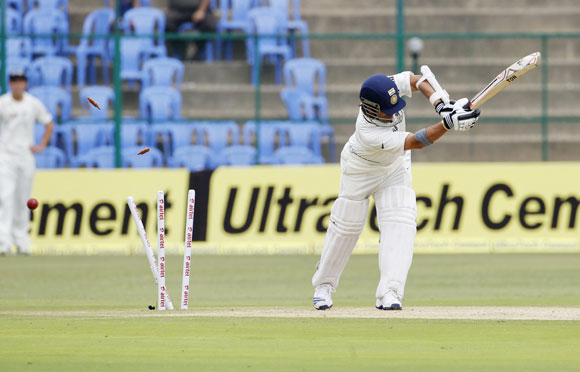 Tendulkar, who sweated it out at his defence during the nets before the start of the match, played cautiously on a wicket which helped the seamers.

Tendulkar hit a glorious straight drive past Bracewell, one of his three fours, but on the very next delivery the New Zealander had his revenge by clean bowling the Master Blaster.

Tendulkar's middle stump was disturbed as he tried to drive with an angled bat a pitched-up delivery off Bracewell.
Bracewell had thus provided a good start after lunch for New Zealand striking twice in quick session to dismiss the dangerous Sehwag and Tendulkar, leaving India tottering at 80 for four.
Tags: Bracewell , Tendulkar , New Zealand , India 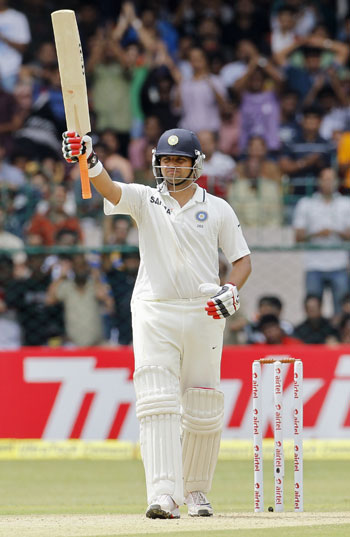 The left-hander took charge and immediately launched an attack against Kiwi bowlers. He hit eight boundaries and a six from the 79 balls he had faced so far.

Raina was rutheless against both Bracewell and Southee smacking them to boundaries.

He had a big slice of luck while on his individual score of 48 when the third umpire Sudhir Asnani ruled him not out in an appeal for stumping by Krugner van Wyk as Jeetan Patel had overstepped the bowling line. Raina soon reached to his seventh Test half century after he took a couple of runs to third man off Patel.

However, Southee had him caught behind shortly after.

Kohli again made a significant contribution 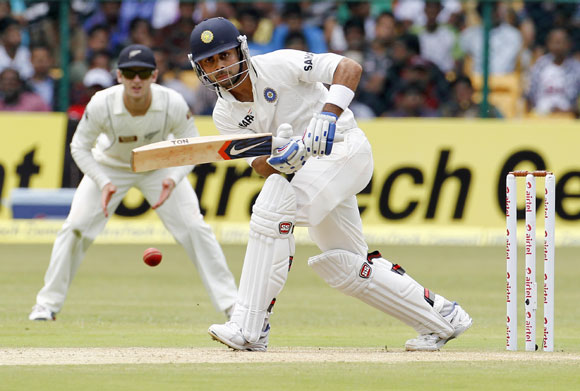 Virat Kohli, who was sedate for a long time, found his bearing soon after as he blasted a six off Kiwi spinner for a six.

As the innings progressed Kohli got his timing right as he cracked delightful boundaries.

Kohli initially played a waiting game until he found his bearings and executed some delightful drives early on.

Later on, he intermittently raised the tempo scoring couple of boundaries in an over.

The Delhi batsman chose loose balls to attack and paced his innings well to see India narrow the deficit. Kohli brought his fifth Test half century off 100 balls in style by clipping pacer Tim Southee to fine leg fence for four. He has so far put on 104 runs with Dhoni for the unbroken sixth wicket stand.