Sign in  |  Create a Rediffmail account
Rediff.com  » Cricket » 'National team must be given importance, not the IPL'

'National team must be given importance, not the IPL' 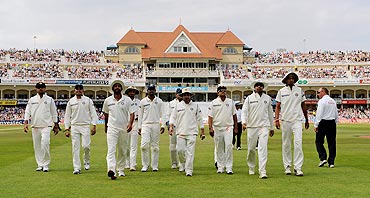 For any Indian, who understands the game and cares for the team, it will take a long time getting over the team's debacle in England, says Bikash Mohapatra.

Analyzing a debacle is never easy. Especially if it concerns a team that comes into a series ranked No.1 and ends up not only losing that ranking but also suffering its worst humiliation in many years.

Team India's predicament is no different.

Having landed up on English soil (in mid-July) as the top-ranked Test nation and, probably, slight favourites -- considering they won the last time they played a Test series in England, the visitors' dismal performance throughout on this occasion was meek surrender.

A 4-0 whitewash is an inexplicable phenomenon. However, MS Dhoni's explanation following the Lord's defeat, 'most of the things that could have gone wrong went wrong', became applicable for the entire series.

'Collectively we have had a bad tour' While the margin was 196 runs for the opening Test, it became 319 runs at Trent Bridge and the final two Tests, at Edgbaston and The Oval respectively ended in innings defeats.

- Dravid is a legend, says Hussain

India's captain was categorical in his summation of the disaster.

"We needed to put runs on the board," he explained, adding, "We are a batting side that is capable of putting up big runs.

"However, that is something that we did not do in the series."

Rahul Dravid, India's top-scorer in the series with 461 runs in eight innings (@ 76.83), had a more analytical explanation.

"We have been found wanting against a better team. We were not up to scratch and they showed us that," he said.

"Collectively we have had a bad tour, something that hasn't happened in a long time.

"There are lessons that are there to be learned," he elaborated.

'We couldn't plan a proper strategy' 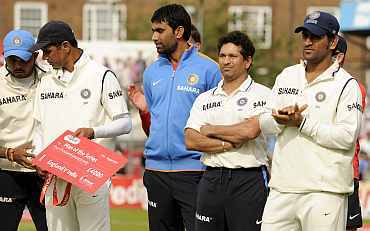 While the versions of those involved are pertinent, there are those who offer a more practical view.

"Too many things went wrong on this tour," explained former captain Ajit Wadekar.

"This is one of the best teams we have, but everyone took this series so lightly," he added, before putting forth three reasons he felt for the whitewash.

"First, it is impossible to have just one practice game ahead of a Test series," reasoned Wadekar, adding, "Secondly we couldn't plan a proper strategy.

"England were well-organized and had planned things properly.

"Besides, there were lots of injuries."

'The selectors have to take the blame' 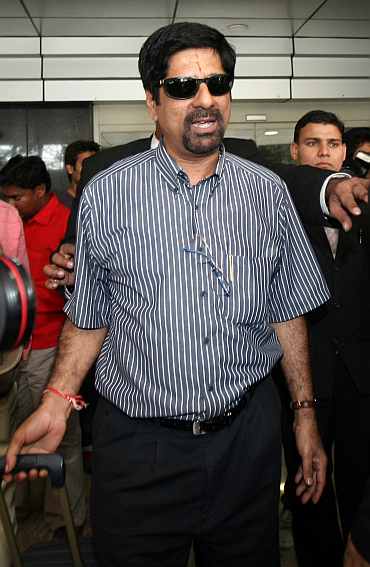 Meanwhile, there were others who didn't hesitate being critical.

Kiran More was certain about who is to be blamed for the capitulation.

"The selectors have to take the blame," he said. "It was a case of bad planning.

"It was doomed from the start."

The former chief of selectors said the many injuries also played a part.

"We lost Zaheer on the first day. The subsequent loss of Gautam Gambhir, Harbhajan Singh and Yuvraj Singh pegged us further back."

'The national team must be given importance and not the IPL' 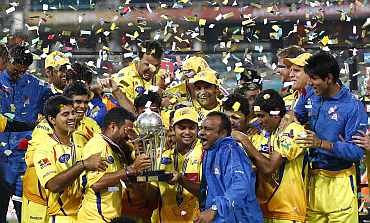 While many senior players skipped the preceding tour of the West Indies in a bid to focus on the series in England, More felt it was the many distractions that cost the team so dearly.

"This tour should have been given more prominence vis-a-vis the series against West Indies," he explained, adding, "The national team must be given importance and not the IPL.

"Now we won't get the respect that we should have got as the No.1 team."

Whatever be the reason, the fact remains for any Indian, who understands the game and cares for the team, it will take a long time to get over this debacle.