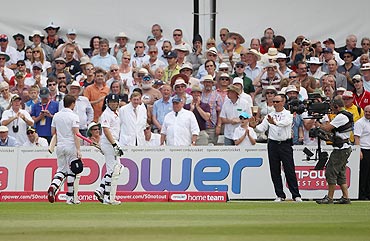 Image: Reserve Umpire Tim Robinson tells Ian Bell and Eoin Morgan not to leave the field after the former was controversially run out
Photographs: Getty Images

Former England captain Michael Vaughan believes that Ian Bell knew he had "messed up" during his controversial run out in the second Test against India but gave the impression of not really knowing what all the fuss was about to get a reprieve from the visiting side.

The incident happened on the third day of the ongoing second Test when centurion Bell, after completing the third run off a shot by Eoin Morgan on the final ball before the tea break walked off the crease, assuming that the ball had crossed the boundary.

But Praveen Kumar made a diving effort at boundary and threw the ball at Abhinav Mukund who clipped the bails at the striker's end.

The Indians appealed and the batsman was given out after replays showed that the ball had not crossed the boundary.

'Bell was dozy and he knew it' 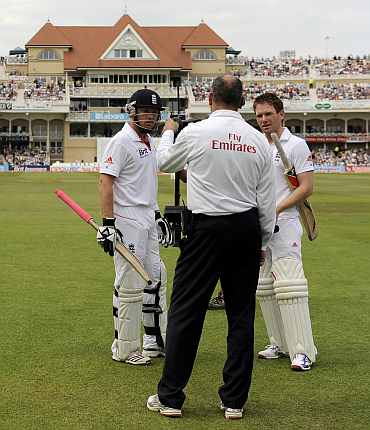 But, in a magnanimous gesture, India skipper Mahendra Singh Dhoni withdrew his appeal against Bell at the tea break, allowing him to bat again.

Vaughan said Bell was well aware of his folly but pretended that he didn't know what had happened.

"But crucially the umpire had said nothing. He did not call four and he did not call tea. When the bails were taken off and Bell turned round to see what was happening he knew he had made a mistake," Vaughan wrote in the Daily Telegraph. 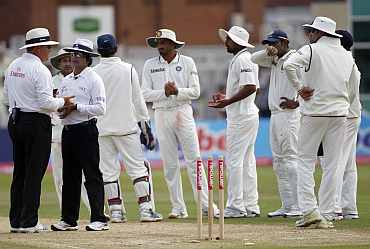 "It was then that he actually played the situation very well. He knew he had messed up but outwardly gave a very cool impression of not really knowing what all the fuss was about," Vaughan said.

"The England players were telling him to come off the field quickly and he did his best to get back to the pavilion. When he was given out Bell would have been blaming everyone but himself," he claimed.

Vaughan said the lifeline to Bell showed that the crowd's booing had unnerved the Indian camp.

"Everyone was a bit scrambled after tea. The day will always be remembered for the run out of Bell and it certainly ended up affecting India more than England. You could tell the booing by the crowd rattled them," he said. 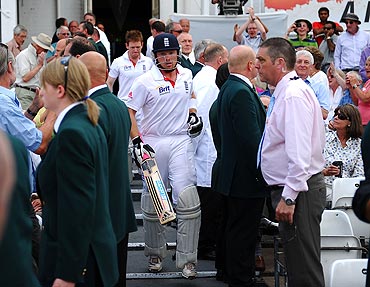 Image: Ian Bell makes his way out of the dressing room after the tea break, following his reinstatement after being given run out
Photographs: Getty Images

"During a Test in India in 2002 I was given out handled the ball. I was equally dozy. But in those situations you put on an act. You try to cause a storm to divert attention.

"I went back into the dressing room in Bangalore and argued with everyone and said India were out of order appealing for that," he added.

"After an hour of stewing I knew I had been completely dumb and dozy. But I think Bell acted quite well. If there had been a thousand people in the ground and this a less important game he would have been given out and not reinstated. But because of this series the Indians realised it would have been a mistake not to reinstate him."

Vaughan said though Dhoni's decision was in the spirit of the game, had he been in the Indian's place, it would have been a firm no to the rival camp.

"Andrew Strauss and Andy Flower must have gone to Dhoni and asked if he was willing to overturn the decision. I would have said 'no he is out'. But once you gauge the reaction of the crowd and everything starts to sink in things change," he said. 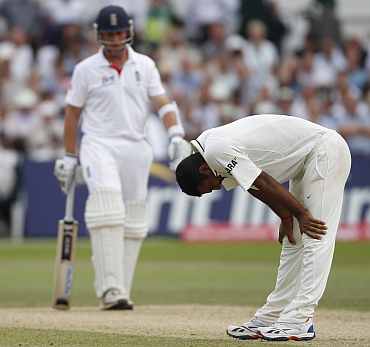 "Dhoni would not have wanted to be tarnished as being the kind of captain who does not play cricket in the spirit of the game. That is the one thing no player wants on his record. It was the right decision but Bell was in the wrong," he added.

Vaughan joked that the reprieve for Bell was another indication of England's dominance in the four-match series which the hosts lead 1-0.

"The way they bullied India was reminiscent of the great Australian team of the past. They bossed them on the field and even managed to convince India that Ian Bell should be given another chance -- a brilliant performance in every respect," he said.

Vaughan said while England seem to be on a high, India look a jaded unit.

"They are a team with only two or three guys in form. In England, I see a team with eight or nine playing well. India look tired of playing cricket and England full of zest," he said.