Bikash Mohapatra reports on the third day's play in the second Test from Trent Bridge.

Three words that defined the third day's action in the second Test between England and India at Trent Bridge (Nottingham) on Sunday.

The day commenced with VVS Laxman being accused of using vaseline on his bat to manipulate the Hot-Spot Technology (in the Decision Review System).

The opening session and the next witnessed some English resilience before it was back to controversy before tea -- regarding Ian Bell's bizarre dismissal (scroll down below for details), which resulted in the Indian team being booed by the crowd.

However, the jeers turned into cheers with Indian captain MS Dhoni's decision to withdraw the appeal and allow the batsman back. It was a gesture applauded by all and sundry.

At stumps on day three, the home team had amassed 441 for six, for an overall lead of 374 runs.

The third day's play was always going to be crucial for the home team's prospects in the match. It was entirely up to them to either make or break their fortune.

And Andrew Strauss and Ian Bell displayed plenty of purpose early on. Resuming at 24 for one (off 11 overs) overnight, the duo scored at a brisk pace.

The bowler responded in style, having Strauss caught behind with the first ball off his fifth over, a trademark outswinger. England's captain scored only 16.

However, his second wicket partnership with Bell yielded 51 runs, laying the foundation for England's second innings.

The home team overcame the deficit in the day's 13th over, just before the first drinks break, courtesy a single by Bell. 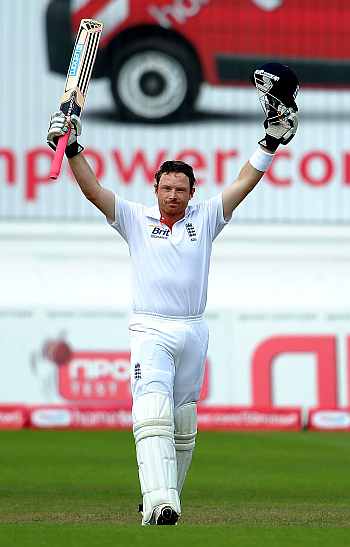 The Warwickshire player, enjoying batting up the order, was playing an impact innings. A boundary to fine leg off Ishant helped him close in on his half century. Another off the next ball, this time towards the vacant square leg region, ensured him a well-deserved one.

It was Bell's 29th Test half century, his fourth against India. He continued to impress, hitting successive boundaries in Ishant's 10th over -- an expensive one with 12 runs coming off it. A single by Pietesen in the same over helped bring up the 50-run partnership for the third wicket.

Desperate for a breakthrough, Dhoni introduced Harbhajan Singh into the attack in the 33rd over, replacing an out of sorts Kumar (11-2-38-0). Not that it helped matter much.

It only helped Pietersen, sans a boundary off the first 51 balls he faced, get one of the 52nd, courtesy a paddle sweep to fine leg. The off-spinner went for six-an-over in the three overs he bowled in the first session.

And, as the teams came back for lunch, it was apparent which one had the honours in the opening two hours.

Bell and Pietersen had put on 73 runs for the third wicket to ensure England was comfortably placed, at 130 for two, going into the second session.

There was a spring in England's step to begin with in the second session. Having consolidated considerably in the opening two hours -- where they scored at almost four-runs-per-over -- the home team, with two settled batsmen at the crease, attempted accumulating the runs at a brisk pace.

The idea was clear, to take the game away from the visitors while there were still wickets in hand.

In the process, Pietersen found the solution to a puzzle that hnd been troubling him so far on this tour. The 31-year-old batsman countered Ishant's short-pitched stuff by coming right across the off-stump.

A straight drive off the second ball off Ishant's third over after lunch signaled Pietersen's intentions. It was magnificent timing by KP, considering he had to check his shot.

And, in Ishant's next over, Pietersen came out firing on all cylinders. The first ball went to the fine-leg fence, the third was slammed to the midwicket and the bottom-hand was used to good effect to drive the sixth to the long-on.

Three boundaries in the space of six balls forced Dhoni to take Ishant (15-3-62-1) out of the attack and hand the ball to Harbhajan in the 47th over.

A boundary to the cover boundary off Kumar, followed by a single, helped Pietersen register his 24th Test fifty, his third against India. He has also scored four hundreds against the same opponents, including that magnificent 202 not out at Lord's last week.

Sreesanth was reintroduced into the attack in the 50th over, replacing an out of sorts Kumar (18-3-57-0). A couple to fine-leg off his second ball helped Bell reach a well-deserved century.

It was the 15th Test century for Bell, his first against India and his first batting at No.3. He celebrated the same by hitting the next ball to the third man boundary. Bell helped himself to a couple of more boundaries in Sreesanth's second over of the spell.

However, the bowler did provide India a much-needed breakthrough in his fourth over, having Pietersen caught behind.

Pietersen's 120-ball 63 comprised seven boundaries, and, save the few overs after lunch, was largely uncharacteristic.

His dismissal also brought to an end a resolute 162-run partnership for the third wicket for England, one that came in quick time, put the visitors under pressure and the home team in the driver's seat.

Eoin Morgan's arrival at crease was essentially good news for India. The 24-year-old had failed to open his account on two of the three times he had come in to bat in the series.

However, with successive boundaries off Kumar, he seemed to get some of his confidence back. Bell was in any case there to provide the rest.

And as the players came back for tea, there was high drama. In the final over before the breather by Ishant, Praveen made a comical attempt at saving the ball off a Morgan shot and did so.

They got it. Bell was out in the last over before lunch. The batsman's 178-ball 137 was inclusive of 22 hits to the fence.

Nonetheless, England had ended the day's second session comfortably-placed at 254 for four (after 66 overs).

Their strategy of taking the attack to the opposition had yielded rich dividends. What's more, there was considerable time at their disposal to inflict more misery on the visitors.

Common sense prevailed after all the chaos towards the end of the second session.

India withdrew its appeal and Bell was recalled. Dhoni had turned the jeers into cheers with his decision.

Bell went on to complete his 150 before Yuvraj had him caught by Laxman at first slip. His 206-ball innings was inclusive of 24 hits to the fence.

His dismissal ended a 104-run stand for the fourth wicket with Morgan, one that had helped England build on their advantage. The latter went on to complete an aggressive half century as the Indian bowlers struggled to make an impact with the old ball.

However, with the new ball being taken in the 81st over, the visitors' fortunes changed, even if for a brief while.

Kumar struck with the second ball, having Morgan caught behind, the latter's 88-ball knock comprising eight hits to the fence and one over it.

In came Jonathan Trott (2) to a thunderous applause.

However, having survived a loud leg before appeal off the first ball he faced, he could survive only 10 balls before Kumar had him caught by Dravid at slips.

Bresnan was fortunate as well. Kumar went up for a leg before decision off the first ball but umpire Marias Erasmus was again unmoved.

Thereafter, woes returned for India, with Bresnan combining well with Prior. The duo put on a valuable partnership for the seventh wicket, scoring at more than five-an-over, to consolidate England's advantage. 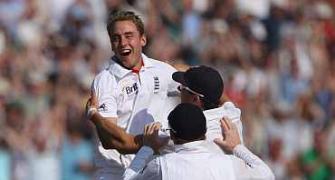 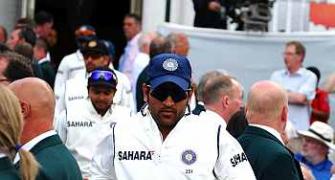 ECB praises Dhoni for withdrawal of appeal against Bell 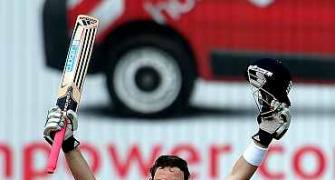 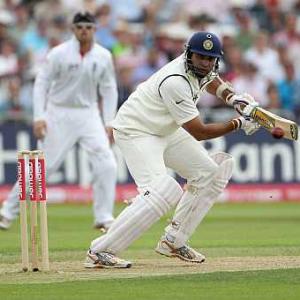