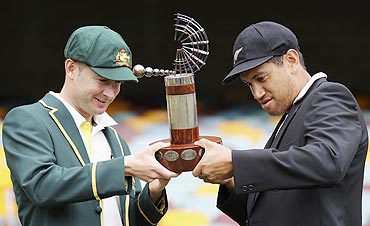 Injury-weakened Australia return to Test action on home soil this week for the first time since their humiliating Ashes defeat, taking on a New Zealand team convinced conditions might just be right for an upset.

With five frontline players absent through injury, Australia captain Michael Clarke will dole out at least three baggy green caps to debutants in Brisbane on Thursday before the first of two Tests against their trans-Tasman rivals.

One of those caps is almost certain to go to David Warner, who is set to open the batting at the Gabba in place of injured all rounder Shane Watson, with fast bowlers Mitchell Starc, James Pattinson and Ben Cutting also jockeying to play their maiden Tests.

One of the pace trio is likely to miss out with Clarke hinting strongly on Wednesday that finger spinner Nathan Lyon, a five-Test 'veteran', would get his chance in a bowling unit alongside the relatively experienced quick Peter Siddle.

'It's about grabbing your chance with both hands' 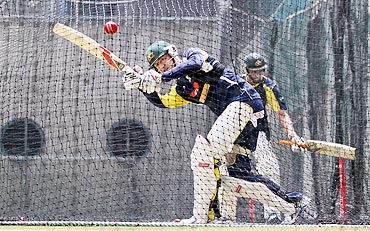 Image: Michael Clarke bats in the nets on Wednesday, the eve of the first Test between Australia and New Zealand
Photographs: Reuters

With pace bowlers Pat Cummins, Mitchell Johnson and Ryan Harris all among the injured, Clarke expects the newcomers to make the most of their opportunity in the first match under the stewardship of new South African coach Mickey Arthur.

"All I've asked of the guys who'll be making their debut tomorrow is to play their way and be confident in their ability," Clarke said in Brisbane on Wednesday.

"It doesn't matter how you get your chance as a player, it's about grabbing it with both hands and I think all the guys available to make their debut are seeing it exactly like that," the 30-year-old added.

Australia have not lost a Test at the Gabba since 1988 nor to New Zealand since 1993 but the Black Caps have been exuding a quiet confidence that they do have a chance of ending their 26-year Test winless streak across the Tasman Sea.

'We definitely feel we can beat this Australian team' 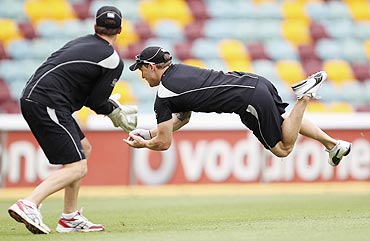 "Experience-wise, it will be one of the weakest," New Zealand captain Ross Taylor said of the Australia team on Wednesday. "We definitely feel we can beat this Australian team."

Some of that Kiwi confidence stems from having put to the sword an Australia A bowling attack featuring Starc, Pattinson and Cutting in a tour match last week.

"Our batters are confident, we've scored runs in the last two first class games, we need to take that confidence on to the wicket here at the Gabba," Taylor added.

"We're in a good space at the moment."

'Experienced guys will need to stand up' 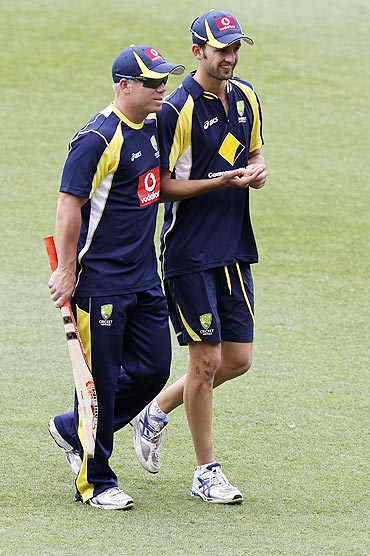 The rash of injuries in the Australia squad has temporarily halted the national debate over whether former captain Ricky Ponting should be put out to grass.

The successful run chase for victory in the second Test against South Africa in Johannesburg earlier this month helped ease worries about frailties in the batting line-up caused by the humiliating 47-run skittling in the first Test.

With a four-Test series against India beginning at the end of December, however, those concerns are sure to be reignited if there are multiple failures against the New Zealand bowling unit which, spinner Daniel Vettori aside, looks fairly weak.

"I think we've got a good mix of youth and experience and the experienced guys, me included, will need to stand up," Clarke added.

"I'm looking forward to the start of the summer and I'd love to get off to a flyer with a win against the Kiwis..."