Sign in  |  Create a Rediffmail account
Rediff.com  » Cricket » Ask the Expert: How many times was Gavaskar LBW in Tests?

Ask the Expert: How many times was Gavaskar LBW in Tests? 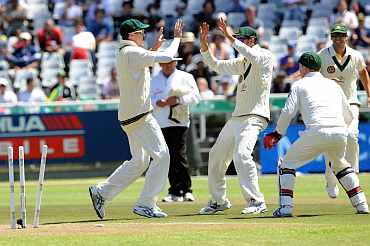 How many times has a Test side scored less than 100 all out and then gone on to win the match? - Sanjeev Arora

It seems this query has been instigated by the extraordinary Cape Town Test, where South Africa eventually emerged victorious despite getting bowled out for 96 in their first innings. This was the 12th instance in Test annals when a side was bowled out for less than 100 in one of the innings, but still went on to win the match. Interestingly, only three such instances have come in the last 100 years!

All four innings took place on the second day of the Cape Town Test. How many times has this happened before in Test cricket? - Vivek Sharma

This was only the third such instance in Test annals. The first took place during the England-West Indies Test at Lord's in June 2000. On the second day, the West Indies' innings ended with the first ball, England were bowled out for 134, but then skittled the West Indies for 54. England faced seven balls that evening. Walsh either batted or bowled in all the four innings on the same day!

The second such instance involved India. At Hamilton, in December 2002, India started the third day at 92 for 8 and was soon all out for 99. They, however, skittled out New Zealand for 94, but were then bowled out again for 154. New Zealand then ended the day with 24 for no loss. Ashish Nehra and Tinu Yohannan either batted or bowled during all four innings that day.

The quickest five-for in an innings in Tests 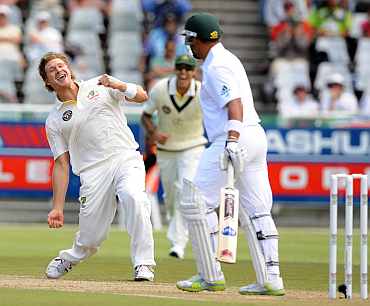 In the Cape Town Test, Shane Watson needed only 5 overs (30 balls) to take his five wickets. I was wondering if this is the quickest a bowler has taken a five-for in an innings in Test cricket? - Mark Brown

Watson actually took 21 balls to take his five wickets. He did not get any wicket off the last 9 balls he bowled. Watson, however, is not the quickest to take 5 wickets in an innings.

The record lies with Australia's Ernie Toshack, who needed only 19 balls (from the time he came on to bowl) to do so against India at Brisbane in 1947-48. Watson comes second with 21 balls and is followed by Hugh Trumble (23 balls), Jacques Kallis (27 balls) and Harbhajan Singh (27 balls).

If we take the span of balls taken by a bowler from his first wicket to fifth wicket, then Pakistan's Waqar Younis holds this record. Against Bangladesh at Dhaka in 2001-02 Waqar took his five wickets in a span of only 13 balls without conceding a run. Australia's Monty Noble is also supposed to have taken 13 balls for his five wickets against England at Melbourne in 1901-02; however, it is an estimate only.

How many times was Sunil Gavaskar LBW in Tests? 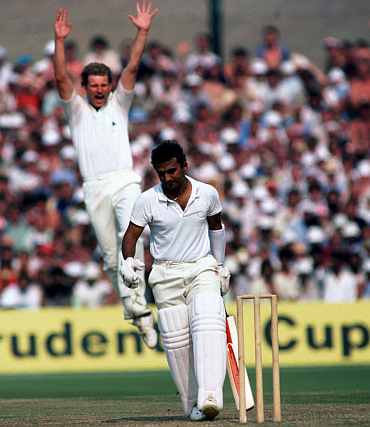 How many times was Sunil Gavaskar adjudged LBW in Test matches at home? What are the corresponding figures in away matches? - Bhanu Parmar

Sunil Gavaskar was dismissed LBW 17 times in his Test career spanning 214 innings. Of them, 10 dismissals came in 108 innings at home and only 7 in 107 innings he played abroad.

Gavaskar was dismissed LBW for the first time in his fourth innings at home. He was not dismissed LBW in this fashion in next 37 innings he played at home, but was then out LBW 9 times in his next 67 innings.

Interestingly, Gavaskar was dismissed LBW as many as four times in his first 26 innings abroad. This means he was dismissed in this fashion only thrice in his next 82 innings!

In the recently-concluded India vs England ODI series, England were 0 for 2 in the second ODI. What is the maximum number of wickets lost by any side in a TEST/ ODI/T20I without scoring a single run by any means? - Stalin Borge

The most number of wickets lost by a side without putting a single run on the board in Test cricket are four. India suffered this humiliation against England at Leeds in 1952, when Pankaj Roy, Dattu Gaekwad, Madhav Mantri and Vijay Manjrekar were dismissed for nought by Fred Trueman and Alec Bedser.

In ODIs, the corresponding record is of three wickets. This has actually happened thrice -- Pakistan against New Zealand at Birmingham in 1983, Pakistan against South Africa at Lahore in 1997 and Bangladesh against Sri Lanka at Pietermaritzburg in 2003 were the teams to suffer this fate.

In Twenty20 internationals also, the maximum number of wickets lost by a side without a run being scored is three. This has happened twice -- Kenya against New Zealand at Durban in 2007 and by Zimbabwe against West Indies at Port-of-Spain in 2010.

When both openers made identical scores 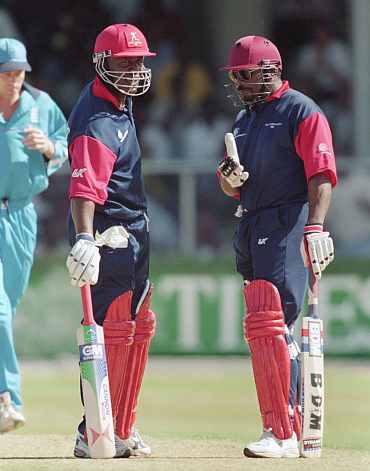 Is there any instance in Test cricket where both the openers scored the same number of runs in one innings or both innings? - Guru Prasad

This includes the instances where one or both of them remained unbeaten. The highest such score is 77 -- made by Gordon Greenidge and Desmond Haynes (unbeaten) for West Indies against England at the Oval in 1988.

In entire Test history, there has been only one instance where the two openers made an identical score in both the innings. This happened at Calcutta (now Kolkata) in 1972-73 when England openers Barry Wood and Dennis Amiss made identical scores of 11 in the first innings and followed it up with 1 in the second innings!

Which batsman was run-out the most occasions? 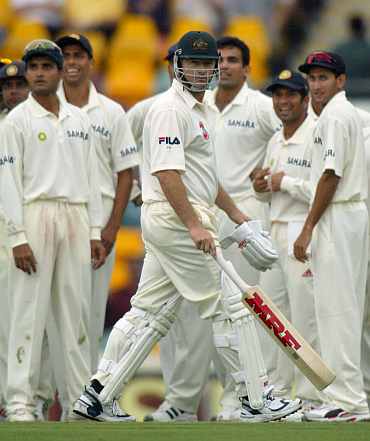 In Test cricket, Ricky Ponting has been dismissed run-out on most occasions -- 14, followed by Rahul Dravid (13), Allan Border (12) and Matthew Hayden (12).

In Test cricket, which tail-end batsman (batting mainly in 8-11 position) has the highest batting average (must have played at least 20 Test matches)? - Abhik Chatterjee

The following batsmen have the highest batting average while batting from # 8 to # 11 with a minimum qualification of 20 matches:

Which batsman has maximum no. of nervous 90s in career? 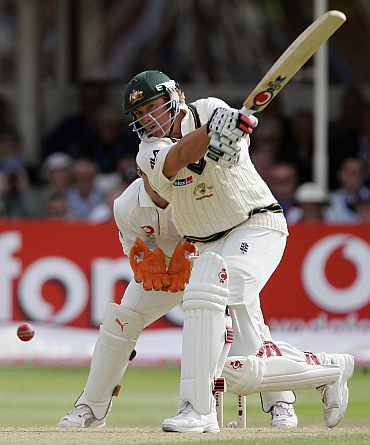 In Test cricket which batsman never scored a century but was out several times in the 90s. - Anthony Goemkar

Australia's Shane Warne aggregated 3,154 runs in 145 Tests without ever reaching the three-figure mark. He had two scores in the 90s, his highest being 99. He is one of 11 batsmen who scored at least two nineties without scoring a hundred in their Test career.

Who has made the most consecutive runs in ODIs without being dismissed? - Yogendra Pratap Singh

The record is held by South Africa's Lance Klusener, who scored 396 runs in 9 consecutive innings between February and June 1999 without being dismissed even once. India's MS Dhoni, who has aggregated 340 runs in 6 innings since September 2011, is second. Sri Lanka's Aravinda de Silva (334), Pakistan's Javed Miandad (326), Mohammad Yusuf (317), New Zealand's Chris Harris (310) and India's Ajay Jadeja (306) are the others to aggregate 300 runs without being dismissed.