India's under-19 cricket team was swamped with congratulatory messages from politicians, cricketers and corporate bosses on Twitterati for lifting its third U-19 World Cup title after a gap of four years at Townsville.

From senior cricketers Yuvraj Singh and Harbhajan Singh to Union Sports Minister Ajay Maken, corporates Anand Mahindra and Vijay Mallya - all came together on Twitter to congratulate the Indian colts on their remarkable achievement.

While the junior Indian team did a Usain Bolt by striking his trademark 'To The World' pose after lifting the coveted trophy, players and other celebrities used social networking sites to express their joy after the visitors beat formidable defending champions Australia by six wickets at Tony Ireland Stadium.

Yuvraj Singh wrote: "Proud of the colts!! Congratulations to the u-19 boys for winning the world cup! well played captain @UnmuktChand." 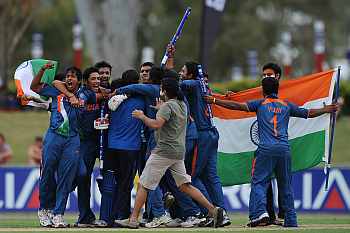 India middle-order batsman Manoj Tiwary was all praise for the Indian team.

"Thank you India U19 Team for making us proud by winning the World Cup trophy. And great inning by @UnmuktChand9 and well played Smit Patel."

"Congrats to the Indian Under 19 Boys for bringing home the Cup. These Boys are our Future," he posted.

"This is what is so infectious about India:the FUTURE is always better&brighter.Congratulations to the Under-19 World Cup Cricket team..!" Mahindra wrote.

"Well done Unmukt Chand! Great to watch. Congrats to the team!", he wrote on his Twitter page.

"Our cricketers have done us proud yet again. Congratulations to the young players for winning the ICC Under-19 Cricket World Cup".