Statistical highlights of the World Twenty20 group match played between Sri Lanka and South Africa in Hambantota on Saturday.

# Jean-Paul Duminy has recorded 27 sixes, eclipsing Graeme Smith's tally of 26. Only Albie Morkel has more sixes (33) than Duminy for South Africa in T20s.

# Tillakaratne Dilshan has posted his first duck against South Africa -- his fifth in T20s. In the ICC World Twenty20, he has recorded three ducks.

# South Africa have registered an important victory over Sri Lanka in their only match against them in T20s.

# South Africa (78 for four off seven overs) have posted 11.14 runs per six balls, which is the highest by any team against Sri Lanka in T20s (minimum six overs).

# De Villiers has got his fourth Man of the Match award in T20s. 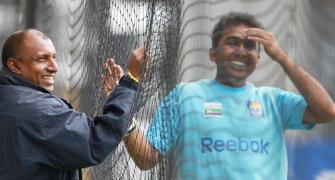