IMAGE: Mortal remains of CRPF personnel who lost their lives in the Pulwama terrorist attack, at the CRPF camp in Budgam. Photograph: ANI/Twitter

Union Law Minister Ravi Shankar Prasad, on Wednesday, said those demanding Pakistan's boycott in the upcoming cricket World Cup are 'justified' to some extent given that things are not normal between the two countries after the Pulwama terror attack.

Ever since 40 CRPF personnel were killed in what was the deadliest terror strike in three decades in Jammu and Kashmir, there has been a demand that India should not play Pakistan in the World Cup, which begins May 30 in England.

The two neighbours are drawn to clash on June 16 at Old Trafford and might square off again in the knockout stage.

"I cannot make any comment (on cricket issues) except to say those who are demanding it have some justification. You can see many films and concerts have been cancelled. Things are not normal," Prasad, who also holds the portfolio of Information and Technology, told 'India Today'.

"If things are not normal, the jhappiyan-pappiyan (hugs and kisses) issues have always been there," he said.

However, he refrained from outrightly calling for a boycott of the match and said it is upto the Board of Control for Cricket in India and the International Cricket Council to assess the situation and take a call accordingly.

"Since it's an international tournament, the ICC and our Indian cricket board (BCCI) have to take a call after consideration with our security establishment," he said.

"But I don't wish away their concern. It's time to say no. Mr Imran Khan had no word of condolence for those who were killed," he added, referring to the Pakistan Prime Minister's address on Tuesday, in which he sought actionable evidence from India while denying Pakistan's involvement in the attack.

The BCCI has maintained that it would follow the government guidelines on bilateral cricket with Pakistan. The ICC, on its part, said that it does not foresee the World Cup schedule getting affected by the current turmoil.

The prominent voices that have called for a suspension of cricket ties are senior off-spinner Harbhajan Singh and pacer Mohammed Shami.

Bilateral cricket between the two countries has not been held since 2012. But the two nations have clashed regularly at global meets, the most recent of such face-offs being the Asia Cup games in the UAE last year.

The other fallout of the Pulwama terror attack was Pakistan being ousted from the shooting World Cup which gets underway in the national capital from Saturday. Pakistan's shooting federation has claimed that its marksmen were denied visas by India.

Also, various state cricket associations across the country are removing or covering pictures and portraits of Pakistani cricketers from their respective facilities. It all started with the Cricket Club of India covering a picture of Imran Khan at their restaurant.

Source: PTI© Copyright 2022 PTI. All rights reserved. Republication or redistribution of PTI content, including by framing or similar means, is expressly prohibited without the prior written consent.
Related News: CRPF, International Cricket Council, Board of Control for Cricket in India, Pakistan, India Today
COMMENT
Print this article 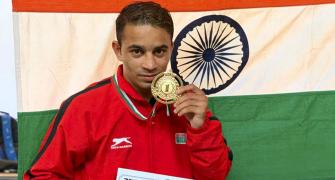 ICC expects India-Pakistan WC match to go through despite tensions