Backed by solid performances from the top order batsmen, title contenders South Africa scored a thumping eight-wicket win over Zimbabwe with 26.3 overs to spare in their first warm-up match of the World Cup at the MA Chidambaram Stadium in Chennai on Saturday.

After bundling out Zimbabwe for 152 in 41.5 overs, South Africa went about the task of chasing in a clinical style hammering the required runs in just 23.3 overs.

Jacques Kallis, who has recovered from rib injury, struck a quick-fire 49 off 39 balls making good use of the platform laid by openers captain Graeme Smith  (41) and Hasim Amla (45) as South Africa coasted to a deserving win scoring 153 for 2 with more than half of their allotted overs left.

Walking in at the fall of Amla's wicket with the total at 69, Kallis in his inimitable style went after the bowlers in aggressive manner and succeeded with his big hits (three six) fast forwarding South African chase for a deserving win.

Kallis' performance not only put at rest doubts about his fitness since recovering from a rib injury he suffered during India's recent tour but also boosted the confidence of Smith as Proteas hope to win their elusive World Cup.

The match turned out to be a one-sided affair after Zimabwe frittered away a good opportunity to gain match practice putting up a insipid batting display and failed to last allotted 50 overs.

But for the efforts of Brendan Taylor (40) and Sean Williams (35), who came in at No.7, sticking to the crease and stitching up valuable partnerships, they could have been in deeper trouble.

As far the Proteas bowling, Smith rotated his bowlers using eight of them to assess their adaptability to the slower wickets in the sub-continent conditions.

Pakistan-born leg-spinner Imran Tahir, on whom Smith has great expectations in the coming World Cup, impressed with a three-wicket haul like experienced fast bowler Morne Morkel as the two ripped apart the Zimbabwean batting line-up.

Sarwan played sheet-anchor after his side were reduced to 65 for four in the 20th over to take West Indies score to 253 for eight in 50 overs after they were put into bat at the R Premadasa Stadium.

Coming in to bat in the 10th over with his side reeling at a precarious 32 for three, Sarwan single-handedly took West Indies to a competitive total. He took the Kenyan bowlers to task and hit 11 fours and five sixes in his 125-ball innings. 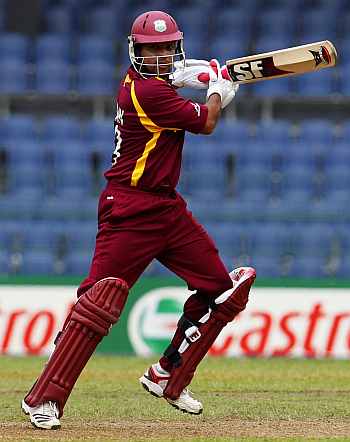 Chasing a stiff target of 254, Kenya were shot out for 192 in 45.3 overs with paceman Andre Russell claiming four for 43 in his 10 overs as West Indies won the match easily to boost their morale ahead of the World Cup.

West Indies made a wobbling start with their opening batsmen Devon Smith (0) and Adrian Barath (17) were dismissed cheaply with just 32 on board, both falling to veteran pacer Thomas Odoyo.

One-down Darren Bravo did not stay long at the crease as he also fell for just 12 to leave Sarwan with a huge task of doing a rescue act.

Shivnarine Chanderpaul contributed just seven and it was left to Sarwan and all-rounder Dwayne Bravo to take the side out of the woods.

The duo did that in superb fashion with a 94-run stand for the fifth wicket from 15.3 overs, taking their side from 65 for four to 159 for five in the 35th over when Bravo was out for a 56-ball 54 which was studded with six fours and a six.

The duo also pushed up the scoring rate with some lusty blows, giving off-spinner James Ngoche (0/41 from five overs) some special treatment.

Sarwan shepherded the tail admirably well and took most of the strike while also scoring at a brisk pace.

West Indies added nearly 100 runs from the remaining 15 overs after Bravo was out and the bulk of them came from Sarwan's blade.

Odoyo was the most successful Kenyan bowler with three for 34 while Steve Tikolo chipped in with two for 32.

Kenya began their run chase on a strong note though they lost their opening batsman Alex Obanda (15) early.

The other opener Seren Waters (43) and one-down Collins Obuya (68) raised 70 runs for the second wicket to keep their side in the hunt for a successful run-chase.

The asking rate, however, caught up with the Kenyans and their middle-order collapsed in a heap while trying to accelerate the run chase.

Once Obuya was out in the 39th over at 152 for four, the remaining six Kenyan batsmen fell in quick succession to fold up the innings at 192, after adding just 40 runs in 7.2 overs.

Shakib, who asked the visitors to bat after winning the toss, claimed three for five runs from his 3.3 overs to help Bangladesh bundle out Canada for a paltry 112 in 37.3 overs.

With only 113 required for victory, Tamim smashed a 50-ball 69 as hosts easily chased down the target in only 19.2 overs.

Tamim struck seven fours and three sixes before he was dismissed when Bangladesh were seven runs shy of the target at the Zahur Ahmed Chowdhury Stadium.

His opening partner Imrul Kayes remained not out at 39 from 57 balls as Bangladesh reached 113 for one with more than 30 overs remaining. Kayes hit five fours in his innings.

Earlier, Canada found Bangladesh bowlers too hot to handle and they lost their two opening batsmen in the first and second over itself with Hiral Patel (0) and Ruvindu Gunasekera (13) dismissed by pace colleagues Shafiul Islam and Rubel Hossain respectively.

The Canadian innings never got going from their early two losses and there was no substantive partnership between their batsmen, the highest being the 39 for the fourth wicket between captain Ashish Bagai (30) and Jimmy Hansra (22).

Bagai and Hansra were the top-scorers for Canada.

Once the duo were out, Canada capitulated with four of their batsmen dismissed at the same score of 81.

For Bangladesh, pacers Shafiul and Rubel chipped in with two wickets each while Mahmudullah got one wicket.

Bangladesh play their second and final warm-up game at Mirpur on February 15 while Canada take on England at Fatullah the next day.

Lankans record an emphatic win vs Netherlands
Colombo: The Sri Lankan top-order batsmen got some good practice ahead of the World Cup as they thrashed minnows Netherlands by a huge 156 run margin in a warm-up match at the Sinhalese Sports Club ground.

Sri Lankan captain Kumar Sangakkara opted to bat on a flat track as home team send the 'Oranje' brigade on a leather hunt.

With skipper Sangakkara and team's best batsman Mahela Jayawardene not coming out to bat, it was Tillekratne Dilshan who started the onslaught with a run-a-ball 78 that included 12 boundaries. Dilshan added 117 runs in 17.2 overs with fellow opener Upul Tharanga (47) before Tharanga was caught by wicketkeeper Wesley Barresi off Peter Seelaar's bowing.

Thilan Samaraweera who has been known more for his Test match batting then spanked the bowlers to score a quickfire 60 off 59 deliveries with the help of five boundaries and a six.

He added 50 runs for the second wicket with Dilshan before the latter was caught by Eric Szwarczynski off Adil Raja's bowling.

Samaraweera retired out as the fourth batsman in order to give others a chance to get a decent hit in the middle.

While Angelo Mathews (21) was the only batsman who struggled, the 1996 World Champions were able to cross 350-run mark due to a blistering 94-run fifth wicket stand between Chamara Silva (54) and Chamara Kapugedara (50). The runs came off only 10.2 overs.

Among the Netherlands bowlers, Ryan ten Doeschate who has recently bagged an IPL contract with Kolkata Knight Riders was hit for 75 runs in nine overs. Mudassar Bukhari was the most successful bowler grabbing two for 52.

The Netherlands were never really in the hunt to chase down such a huge target. Save an 80-run fifth wicket partnership between Tom de Grooth (76) and skipper Bas Zuiderant (38), there was not much resistance from others.

Chasing a stiff target of 312 for victory, the Ireland batsmen put up an impressive performance before experienced Kiwis bowled well at the death as the minnows were all-out for 279 in 48.2 overs. It was New Zealand captain Daniel Vettori who scalped four for 42 to guide his team to an unimpressive win after Irish top-order threatened to take the game away.

Credit should be given to Ireland captain William Porterfield (72) and young opener Paul Stirling (39) for smashing the New Zealand bowlers during the field restrictions as they raced their way to 93 inside 13 overs.

One Porterfield was dismissed by pacer Hamish Bennett in the 23rd over caught by James Franklin, the Irishmen lost the momentum. There were some good contributions from Ed Joyce (41), Niall O'Brien (32) and Trent Johnston (33) but that wasn't enough as Vettori put the brakes on run-rate during middle overs.

Earlier, put into bat by Ireland skipper Porterfield, New Zealand batsmen gave a good account of themselves on a placid Jamtha strip scoring 311 for six in their stipulated 50 overs.

It was Martin Guptill who hammered the Irish bowlers en route his 130 off only 134 balls with 12 boundaries and three sixes. Guptill shared 79 run second wicket partnership with Jesse Ryder (48) in 17.1 overs after star opener Brendon McCullum (1) was cleaned up by medium pacer Boyd Rankin.

But it was a partnership of 104 for the fourth wicket with James Franklin (49) that enabled the Black Caps to cross the 300-run mark.

The century partnership was achieved in only 14.4 overs.

Although none of the Black Caps batsmen reached half century but most of them made useful contribution. Ross Taylor (33) didn't score much but it was veteran all-rounder Scott Styris who slogged his way to an unbeaten 29 off 15 balls with the help of three sixes that provided the necessary impetus towards the end.

Trent Johnston had the best figures of two for 62 while Rankin, Kevin O'Brien, Andre Botha and Paul Stirling picked up a wicket apiece.