The controversial Decision Referral System was in the focus again when TV umpire Bruce Oxenford upheld Billy Doctrove's leg-before-wicket decision against Steve Tikolo during the Kenya-Canada tie in New Delhi, although replays showed the batsman got an edge onto his pads.

Tikolo was ruled out lbw by on-field umpire Doctrove off Rizwan Cheema in the 15th over but no sooner the decision was given, a confident Tikolo went for the review and replays clearly showed the veteran Kenyan batsman got an inside edge.

However, the third umpire was not convinced and upheld Doctrove's verdict.

Interestingly, if the HotSpot -- which the ICC avoided using in the tournament because of cost -- had been in place it would have benefitted Tikolo.

Incidentally, Doctrove was at the wrong end during Canada's innings when he adjudged Cheema leg-before-wicket, but this time the TV umpire got it right as replays showed the batsman edged the ball. 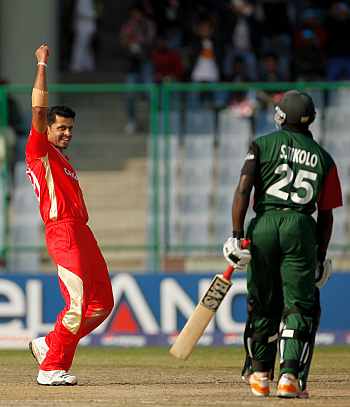 The UDRS was at the receiving end in Sunday's match between India and Ireland when Irish batsman Alex Cusack was given out out lbw to Yuvraj Singh even though the point of impact of the ball on the pad was more than 2.5 metres from stumps.

Australian umpire Rod Tucker initially ruled Cusack not out off Yuvraj in the 44th over but after a review appeal by India, he reversed his decision and gave the batsman out though TV replays showed the point of impact at the pad would have been more than 2.5 meters from the stumps.

Cusack, the eighth Ireland batsman to be out and Yuvraj's fifth victim in the match, was well down the track, his backfoot nearly a foot outside the crease and his front foot also well down the track, though HawkEye showed the ball would have hit off and middle at a comfortable height.

Earlier, during the tied India-England Group B match at the same venue on February 27, on-field umpire Billy Bowden stuck to his decision of ruling England's Ian Bell not out for a leg before appeal against him by the Indian team when he was trapped on the pad by Yuvraj.

India called for a review of the decision and technology showed that the ball would have gone on to hit the stumps but for the pad coming in the way. But the point of impact was more than 2.5m from the stumps and the batsman stayed on as Bowden stuck to his original call.

On March 4 also, during the Zimbabwe-New Zealand Group A clash at the Motera stadium in Ahmedabad, the former team's captain Elton Chigumbara was given out leg before to his rival counterpart Daniel Vettori when he had stepped well out to the crease to play the Kiwi left-arm spinner.

Umpire Marias Erasmus declared the batsman out, a review of the decision was called for by Zimbabwe and it was found through TV replays that though the ball would have gone on to hit the leg stump, the point of impact was clearly beyond 2.5m.

Yet umpire Erasmus stuck to his original decision and the batsman had to leave the field.