A sloppy India got their act together in the nick of time to escape with a dramatic tie against a spirited England in a nerve-wracking World Cup group-B league match in Bangalore on Sunday.

The Indians rode on Sachin Tendulkar's (120) record fifth World Cup century to pile up 338 all out, but a heroic batting display by Andrew Strauss (158) and some toothless bowling allowed England to leave the match tied at a jam-packed Chinnaswamy Stadium.

With 14 needed off the last over bowled by Munaf Patel, Graeme Swann collected three runs before Ahmal Shahzad sent the bowler straight down the ground for a six.

That reduced the difference as England needed five off three, and then two off the last delivery. Swann drove the final ball but could not clear mid-off as the match, which saw two magnificent knocks, came to a thrilling end. 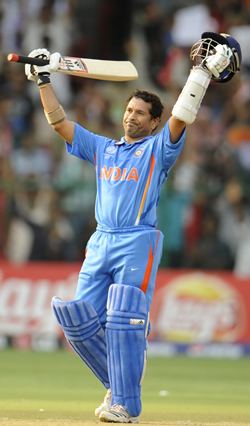 The 37-year-old Tendulkar provided the sparks in a scintillating Indian batting display.

It was vintage stuff by Tendulkar as he unleashed 10 boundaries and five sixes in his 115-ball 120 to lay the platform for the Indian onslaught.

Tendulkar's milestone moment came in the 35th over when he glanced Tin Bresnan to the boundary to record his fifth World Cup ton, surpassing former India captain Sourav Ganguly, current Australia captain Ricky Ponting and his former teammate Mark Waugh who had four hundreds to their credit.

But things took a dramatic turn with England making a strong reply.

India, touted as the favourites, were in the end lucky to escape with a tie as England lost their nerves and collapsed in the dying stages after being 282 for two at one stage.

It was a remarkable result as both teams managed to get a point each from the thrilling contest which saw fortune fluctuate from one team to the other till the very end.

The Indians gave a sorry account of themselves on the field as they not only fielded poorly but the bowling also lacked the sting. It was a fiery burst by Zaheer Khan, who took the key wickets of Strauss and Bell, which helped them to bounce back.

The England innings began with a flourish as Strauss and Kevin Petersen went for their strokes and maintained a scoring rate of over seven runs an over.

The opening pair put on 68 runs before Munaf provided the breakthrough by accounting for the dismissal of Pietersen, taking a stunning return catch in his second attempt much to the delight of his teammates.

Strauss seemed to be in no discomfort as he notched up his 28th ODI half century and also completed the milestone of scoring more than 4000 runs in ODIs.

Strauss and Jonathan Trott tried to carry the momentum before leg spinner Piyush Chawla struck by trapping Trott plumb in front of the wicket.

Earlier, Apart from Tendulkar's 47th ODI century, Gautam Gambhir (51), Yuvraj Singh (58) and Virender Sehwag (35) were the other notable scorers as the Indians virtually tore the English batting attack to shreds, leaving the visitors a stiff asking rate of 6.78.

It was India's highest World Cup total against England.

Pacer Tim Bresnan was the pick of the England bowlers, claiming 5 for 48, but none of the other bowlers could make much of an impression.

It was vintage stuff by Tendulkar as he unleashed 10 boundaries and five sixes in his 115-ball 120 to lay the platform for the Indian onslaught.

Tendulkar's milestone moment came in the 35th over when he glanced Tim Bresnan to the boundary to record his fifth World Cup century, surpassing former India captain Sourav Ganguly, current Australia captain Ricky Ponting and his former teammate Mark Waugh, who had four hundreds to their credit.

Electing to bat first, the Indian innings began on a tentative note but the runs started flowing once the batsmen came to terms with the pace and bounce of the Chinnaswamy track.

Opener Virender Sehwag had a reprieve off the very first ball of the innings, as Graeme Swann dropped a difficult chance in second slip off James Anderson.

The dashing opener tried to push Anderson's outgoing delivery and got a thick edge but Swann could not latch on to the sharp chance.

Sehwag had two more close shaves in an eventful first over as he struggled to time the ball well. But he began to look a little more comfortable against pacer Ajmal Shahzad as he spanked him to the boundary off his first ball.

Sehwag attacked Anderson by smashing him to the point boundary while Tendulkar also tried to force the pace of scoring by going for his strokes.

Although the ball was not coming on to the bat quickly enough in the initial stages, Sehwag played with customary flourish and picked Anderson for special treatment, clobbering him for 11 runs in one over.

But his belligerence was shortlived as he perished in the very next over, pacer Bresnan accounting for his scalp in his very first over.

Bresnan provided some width and Sehwag tried to steer the ball through the vacant slips but only succeeded in edging the ball to wicketkeeper Matt Prior. His whirlwind knock of 35 came off 26 balls and contained six boundaries.

With Sehwag's departure, Tendulkar took upon himself the responsibility of scoring briskly and hammered Anderson for two consecutive boundaries.

The left-handed Gambhir, who joined the action after Sehwag's fall, also made his intentions clear as he used his feet to smash spinner Graeme Swann to the boundary in his first over. But, in that same over, Gambhir was lucky to survive a stumping chance.

Tendulkar brought up India's 100 on the board in style, lifting Paul Collingwood for a huge six over long-off. He notched his 94th ODI half century with another six, Collingwood being the bowler again.

With the two Indian batsmen going great guns, England captain Andrew Straus brought back his main spinner, Swann, into the attack and Tendulkar greeted him with two consecutive sixes much to the delight of the capacity crowd.

Tendulkar lifted Swann's first ball for a six over wide long-on with intense power and then clobbered the next ball over mid-wicket.

While Tendulkar went on the offensive, Gambhir fetched his 22nd ODI half century with a streaky boundary to the third-man region.

But Gambhir (51) perished in the next over, being bowled by Swann as he lazily tried to steer a turning ball towards third man only to see his stumps being knocked down, bringing an end to the rollicking 134-run partnership.

Tendulkar then created history by becoming the first cricketer to score five centuries in the World Cup when he glanced Bresnan to the fine leg boundary.

After completing the milestone, he unleashed a flurry of strokes and again picked up Swann for special treatment by clobbering him for a mighty six over long-on.

It was Anderson who brought an end to Tendulkar's rampaging knock as the champion batsman played his shot a touch too early and Michael Yardy took the catch at cover. His scintillating 115-ball 120 contained 10 boundaries and five sixes.

Yuvraj notched his 46th ODI half century, hitting Anderson to the boundary, and combined with captain Mahendra Singh Dhoni to maintain the runs flow.

Yuvraj and Dhoni returned to the pavilion in quick succession as they tried to force the pace of scoring in the slog overs.