In a fresh blow to the Pakistan cricket team, fast bowler Junaid Khan is likely to be banned for suspect action. According to Basit Ali, former Pakistani batsman and cricket analyst, Junaid's action is objectionable.

Junaid was drafted into Pakistan national team last week to participate in World Cup, beginning Feb 19. But according to experts his career is likely to end even before it starts.

"There is an evident jerk in Junaid's action. As he prepares for the World Cup, I think he will be banned in his first match itself," said Ali.

"No doubt he has played outside the country and has so far gone unnoticed, but at the ICC World Cup he will come under observation of expert umpires that would lead to his ban. I think Pakistan took a wrong decision by including him into World Cup squad," Ali added.

Junaid khan was included into World Cup squad when left-arm pace bowler Sohail Tanvir was axed from Pakistan's team after failing to completely recover from a knee problem.

Born in December, 1989 Junaid is the first player from Swabi district in Khyber Pakhtunkhwa province to play for the national team.

A left-arm medium-fast bowler, Junaid played cricket from Abbottabad region and has also represented the under-19 squad. He has an impressive record in first-class cricket, having picked 167 wickets at an average of just above 21 in just 35 matches.

He was also the second-highest wicket-taker for Pakistan A in the unofficial ODI series during their recent tour of West Indies where he picked up five wickets in three games.

During an interview Junaid said, "Getting a chance to play in the World Cup is a dream come true for me. If we get to play against India in the World Cup, it would be a blast to bowl at Sachin Tendulkar. It's my ambition to get him out."
Tahir Ali In Islamabad
Related News: Junaid Khan, Basit Ali, Pakistan, ODI, ICC
SHARE THIS STORYCOMMENT
Print this article
Now Obama asks Pak to release Raymond Davis 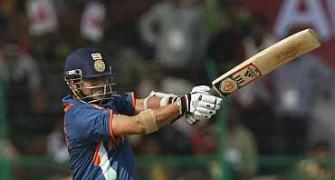 Looking forward to duel with Tendulkar: Akhtar
Sohail Tanvir ruled out of World Cup, Junaid in

Eng players to be re-interviewed in spot-fixing

'To get Sachin Tendulkar out is an ambition'