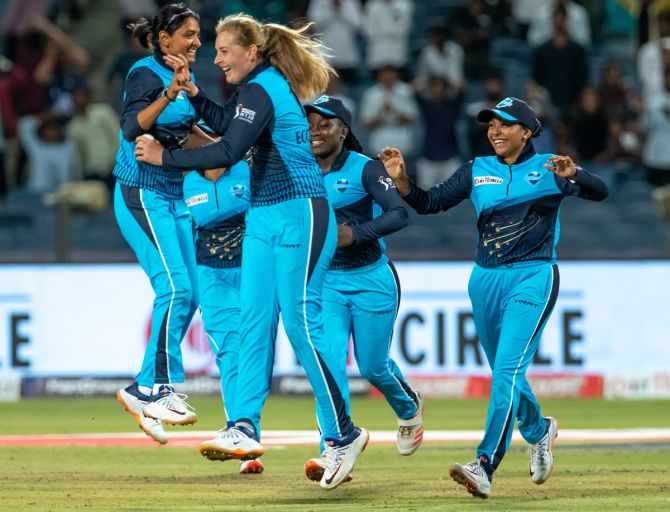 IMAGE: The Supernovas players celebrate victory over Velocity in the Women's T20 Challenge final in Pune on Saturday. Photograph: BCCI/IPL

West Indian all-rounder Deandra Dottin starred with bat and ball as she powered Supernovas to an unprecedented third Women's T20 Challenge title triumph after a four-run win over Velocity in a thrilling final, in Pune, on Saturday.

Dottin top-scored with a 44-ball 62 at the top of the order to help Supernovas post 165 for 7 after being put in to bat.

With the ball, she then took two wickets for 28 runs in her four overs to play a major role in restricting Velocity to 161 for 8.

South African batter Laura Wolvaardt almost single-handedly took Velocity within striking distance of a sensational win with a blazing 65 not out off 40 balls, which included five fours and three sixes. Wolvaardt, the only batter in the tournament to score two half centuries, launched a ferocious onslaught in the death overs with a flurry of boundaries to raise hopes of a stunning victory for Velocity.

Number 10 batter Simran Bahadur (20 not out off 10 balls) also chipped with three successive fours in the penultimate over.

Velocity needed 17 runs from the final over but left-arm spinner Sophie Ecclestone (2/28) conceded just 12 runs to win the match despite Wolvaardt hitting a six off the first ball.

If Englishwoman Ecclestone made life difficult for Velocity's batters in the first half of the run chase, Australian leg-spinner Alana King (3/32) did the same in the back end.

King was on a hat-trick after dismissing Sneh Rana and Radha Yadav off consecutive balls in the 16th over.

The Supernovas won the first two editions of the tournament in 2018 and 2019 before losing to Trailblazers in the final in 2020.

The tournament was not held last year due to the COVID-19 pandemic. Velocity finished runners-up in 2019.

Velocity made a blazing start to their run chase, with openers Shafali Verma (15) and Yastika Bhatia (3) scoring 28 runs in the first two overs but that proved to be the only time the Deepti Sharma-led side was ahead in the match.

They suffered a batting collapse with half of them back in the hut for 64 runs in the 11th over. They were reduced to 38 for 3, and things got only worse from there.

Earlier, Dottin made full use of an early reprieve to score a blistering half-century and propel Supernovas.

The 30-year-old was dropped on 13 by Sneh Rana off Deepti Sharma in the fourth over, and she made Velocity pay for that costly mistake by scoring 62 off 44 balls, which was studded with one four and four sixes. The experienced campaigner stitched 73 runs for the opening wicket with Priya Punia (28) and added 58 for the second wicket with in-form captain Harmanpreet Kaur (43 off 29 balls).

The Supernovas could only score 34 runs in the last five overs while losing five wickets.

Dottin and Punia gave the Supernovas a flying start, scoring at a brisk pace and reaching 46 for no loss in the powerplay. Punia hit a six off Cross in the third over but her partner Dottin did even better, smashing consecutive maximums in the sixth over bowled by Rana. Punia was going strong when she got out in the 10th over bowled by Simran Bahadur, after smashing a six.

Captain Kaur, the tournament's highest scorer, came out and straightaway began collecting the runs, hitting a six off Rana in the 12th over and following it up with two maximums in the 14th over bowled by Yadav.

In the next over, Velocity captain Deepti struck as she bowled Dottin.

The Supernovas suffered a batting collapse in the death overs as they lost four wickets for the addition of just 11 runs.

Pooja Vastrakar (5) was cleaned up by Ayabonga Khaka in the 17th over before Cross claimed two wickets -- that of Kaur and Sophie Ecclestone (2) -- in the space of three balls in the next over. 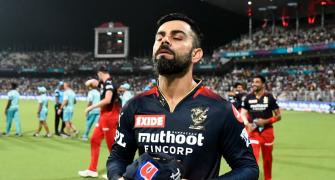 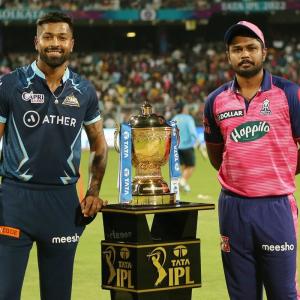