Fine fifties by Rahul Dravid and VVS Laxman steered India to 229 for three on the fourth day of the second Test against the West Indies at Bridgetown on Friday, an overall lead of 240 runs.

With the visitors showing no intent of forcing a result, the match, already affected considerably by rain, seems heading for a draw.

At stumps, Laxman was unbeaten on 72, his 171-ball knock inclusive of six hits to the fence. Giving him company was Virat Kohli, on 26.

The duo have so far put on 75 runs for the fourth wicket.

Dravid, with 55, was the other major contributor in the Indian second innings, putting on 65 runs for the third wicket with Laxman.

Fidel Edwards was the most successful bowler for the home team, with figures of two for 58.

Earlier, rookie opener Abhinav Mukund missed a half century by only two runs as India crawled to 143 for two at tea. Dravid and Laxman had added 54 runs for the third wicket at that juncture.

While the West Indies' bowlers lacked the required incisiveness, there was a distinct lack of urgency from the Indian batsmen, especially Dravid, who failed to force the pace in the post-lunch session during which he scored 29 runs from 106 balls.

Young Mukund (48, 81 balls, 6x4) was unlucky to miss out on his maiden Test half century; a fantastic short-ball from Fidel Edwards sending him back to the pavilion.

Edwards, who peppered the youngster with short deliveries, finally got one that the batsman tried to haplessly fend and gloved it to wicketkeeper Carlton Baugh.

However, the youngster gave a good account of himself in this innings, playing some fluent drives and no loose shots. He was ready to leave the ones outside the off-stump and punish anything that was in his zone.

The innings could just provide Mukund a ticket for the tour of England as the reserve opener. Along with Dravid, he added 63 runs for the second wicket in 22.2 overs.

Dravid completed his 60th Test fifty off the second ball after resumption. However, the veteran didn't survive long.

Off the first ball of the fifth over in the final session, Edwards had him caught by Ramnaresh Sarwan at first slip. Dravid's 171-ball knock was inclusive of only three boundaries.

Laxman registered his 50th Test fifty soon after. He and Kohli safely negotiated the visitors till the end of the day. 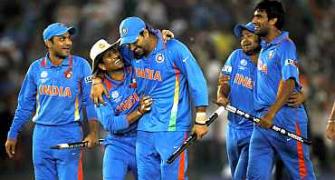 Efforts in domestic cricket have paid off: Mukund