Shivnarine Chanderpaul carried West Indies hopes on his shoulders yet again as the touring side battled to avoid defeat by England in the first Test at Lord's on Saturday.

West Indies bowled England out for 398 in their first innings to trail the hosts by 155 runs but they lost three wickets in nine balls just before tea to undo the good work.

Chanderpaul, who made 87 not out in the first innings, and Marlon Samuels dug in, however, and they reached the close on the third day on 120 for four, 35 runs behind.

The world's top-ranked batsman Chanderpaul, at the heart of another rearguard action, was unbeaten on 34 with Samuels on 26.

England resumed on an overcast morning on 259 for three and captain Andrew Strauss added just a single to his overnight 121 before nicking pace bowler Kemar Roach through to wicketkeeper Denesh Ramdin.

Jonny Bairstow struck three fluent fours on his Test debut but his bright innings ended on 16 when Roach jagged a ball sharply back to trap him lbw. 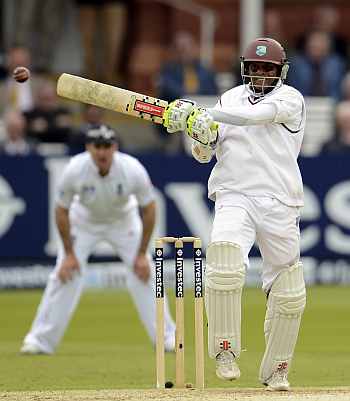 Matt Prior also looked confident in his knock of 19 but he became Shannon Gabriel's first Test victim, playing an airy shot at the young fast bowler to be bowled through the gate.

Bresnan edged Darren Sammy to Ramdin for a duck and England had slumped to 323 for seven.

Ian Bell batted through the morning session to reach lunch on 38 not out but he lost Stuart Broad soon after the interval, bowled by a superb delivery from Fidel Edwards that hit the top of his off stump.

Bell reached a patient fifty before Gabriel bowled Swann. Bell was last man out for 61, well caught at deep square leg by the diving Powell off Gabriel who finished with figures of three for 60 on his debut.

Barath and Powell withstood a fierce examination from James Anderson and Broad, surviving 12 overs of high quality fast bowling surrounded by a ring of close fielders.

But with tea looming, Barath edged a catch to Prior off Bresnan, and Powell and Edwards soon joined him back in the pavilion after two inexplicable rushes of blood.

Powell foolishly pulled a short ball from Broad straight to Bell at deep square leg and Kirk Edwards was brilliantly run out by a direct hit from Bairstow attempting a non-existent single.

Darren Bravo joined Chanderpaul and made a fluent 21 before Swann bowled him with a clever delivery which the deceived the left-hander into offering no shot. 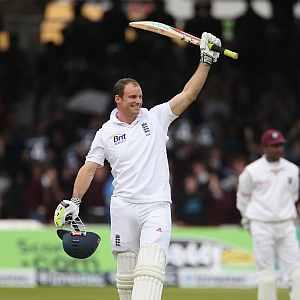 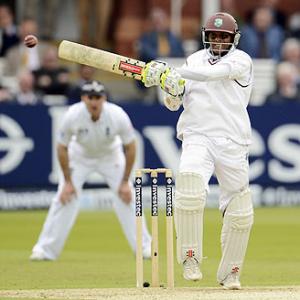