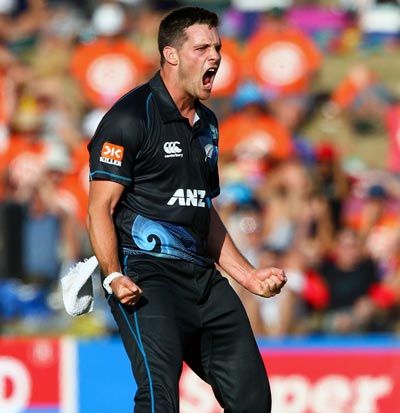 Virat Kohli hit a splendid century but Mitchell McClenaghan claimed four wickets to lift New Zealand to a thrilling 24-run victory over India in the first One-Day International, in Napier, on Sunday.

Kohli registered his 18th ODI century, scoring 123 from 111 deliveries before pacer McClenaghan's three-wicket burst in 11 balls changed the complexion of the game completely as the hosts took a 1-0 lead in the five-match series.

From a comfortable 224 for five at one stage, the Indians were all out for 268 in 48.4 overs, McClenaghan being the wrecker-in-chief with a match haul of four for 68.

For the Kiwis, Corey Anderson shone bright with an all-round effort, scoring 68 runs off 40 deliveries before taking two wickets for 51 runs.

After being put in to bat, half-centuries from Anderson, Kane Williamson (71) and Ross Taylor (55) helped the hosts amass 292 for seven in their allotted 50 overs after India had elected to bowl.

Kohli, who finished on the losing side for the first time after scoring a hundred while chasing, found no support from the other end as India kept losing wickets at the other end.

In fact, the first wicket came before the first boundary of the innings was hit, as Rohit failed to rotate the strike and came under pressure to score, holing out to Southee off a short ball from McClenaghan in the sixth over after struggling to three from 23 balls.

Kohli came to the crease and got off the mark with a signature cover drive, the first boundary of the Indian innings.

Along with Dhawan, he put on 58 runs for the second wicket as the two batsmen tried to build a platform from which to launch the chase.

Dhawan tried to be the more aggressive of the two, but his timing was awry as he could only muster a strike-rate of 69.56. His dismissal in the 19th over reflected as much, as he mistimed pull off a short ball from Anderson and was out for 32 runs off 46 balls.

Rahane (7) was out to a superb one-handed catch by Nathan McCullum. The ball, played towards mid-off, seemed to dip before the off-spinner caught it, leaving the batsman shocked.

Raina added 45 runs with Kohli for the fourth wicket; their runs came in good time at a rate of 6.14. However, even so, the asking run-rate was always climbing and trouble
resurfaced when Raina was out, top-edging a pull shot, off Milne. He scored 18 runs off 22 balls, with two fours.

At the other end, however, Kohli continued unfazed. He came to the crease to pull off this chase and he went about the job not caring about the dismissals too much.

In Raina's company, in the 26th over, he brought up his half-century off 58 balls, inclusive of four fours and one six. But after the double blows in the middle overs, he settled down with skipper Dhoni to try and dig India out of the hole.

India's captain scored 40 runs off only 46 balls, with two fours and two sixes. More importantly, he rotated the strike well with Kohli as the two put up 95 runs for the fifth wicket off just 85 balls.

In the 38th over, Kohli reached his 18th ODI hundred, off 94 balls; it included 10 fours and a six, courtesy another beautiful boundary through the covers.

India looked to be turning the tide as 51 runs came off the Batting Powerplay without any loss of wickets.

The turning point was when Dhoni was out caught behind in the 43rd over by McClenaghan as he gloved a short ball and was taken down the leg side by keeper Luke Ronchi. Three balls later, the bowler removed Ravindra Jadeja (0), also caught behind fending a rising delivery.

Kohli still did not give up, hitting boundaries at regular intervals, before he was finally out in the 45th over, caught sharply by Jesse Ryder, who had earlier misjudged a skier from the batsman at cover when he was on 95.

The tail-enders failed to come to the party as India continued to slip. Bhuvneshwar Kumar was run-out for six, while R Ashwin was caught in the deep by Southee off Kane Williamson for 12.

The Indian innings came to an end when Southee bowled Ishant Sharma for five with a quick yorker.

Earlier in the day, Anderson blasted a quickfire 68 off 40 balls, while Williamson and Taylor hit fifties to put on 121 runs for the third wicket and guide New Zealand to a huge total.

Mohammad Shami was the most successful bowler for the visitors, finishing with 4-55 from nine overs. Bhuvneshwar Kumar (1-38), Ishant Sharma (1-72) and Ravindra Jadeja (1-61) were the other wicket-takers.

Taylor and Williamson flayed the Indian bowling in the middle overs, milking the two Indian spinners, Ashwin and Jadeja, with considerable ease.

Taylor completed 4000 ODI runs in 121 innings, at the personal score of 15 not out, becoming the second-quickest Kiwi batsman after Nathan Astle (120 innings) to do so.

In the 23rd over of the innings, Williamson brought up his seventh ODI half-century, off 66 balls, which included  five fours.

Eventually, Taylor edged to Dhoni in the 37th over off Shami, becoming the Indian skipper's 300th ODI victim.

Taylor was the only batsman to fall in the Batting Powerplay before Brendon McCullum and Anderson slammed 41 runs off those five overs. India pulled back things in the final couple of overs but New Zealand did enough damage, courtesy Anderson to score 92 runs from the last ten. 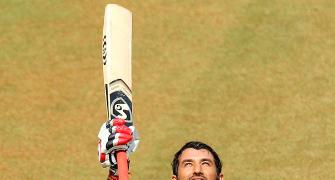 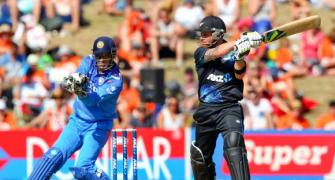 Stats: Kohli's century goes in vain for the first time 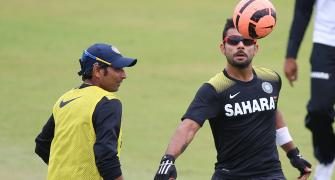 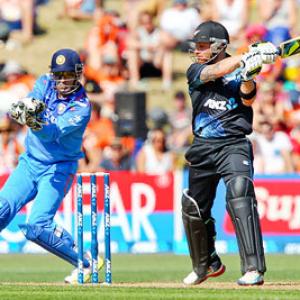 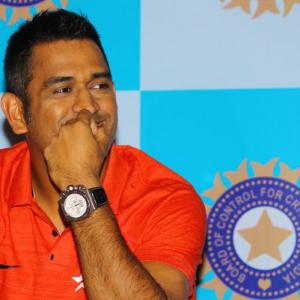 We've done away with experimentation after the Chappell era: Dhoni