Put in to bat by Delhi Captain Shreyas Iyer, Rajasthan could not have asked for a worse start, as Sanju Samson was caught short of his crease by a direct throw from Kagiso Rabada. Samson was out for a duck, without facing a ball.

Ajinkya Rahane and Captain Steve Smith joined forces and started tonking the bowlers all over the park. They took a fancy to Axar Patel in particular, taking him out for 39 runs in his 4 overs.

Rahane, who was dropped in the 5th over when he was on 16, went into overdrive, playing big shots that came smoothly off his bat.

He found a perfect ally in Smith as they accelerated the innings with 95 runs coming off the first 10 overs. Rajasthan's ousted and current skippers brought up their century stand in the next.

With both batsmen going hammer and tongs it was guaranteed that Rajasthan would breach the 200 run mark. That was not to be as Smith was taken out by Axar in the 14th over just after completing his 50.

Smith's dismissal severely dented any chances the Royals had of going past 200 as they needed 10 runs an over to get there, but with a new batsman at the other end it was bound to get difficult.

Even as Rahane plundered the bowling and got to his century, Rajasthan continued to lose wickets at the other end -- Ben Stokes for 8, Ashton Turner for a duck, Stuart Binny for 19 off 13 and Riyan Parag for 4. 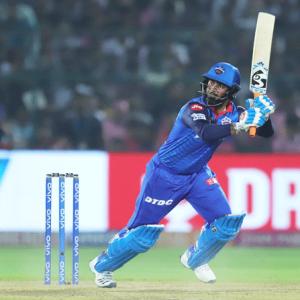 PICS: Rahane's ton in vain as Pant sees Delhi through