Earlier, England batsman Kevin Pietersen fell to an orthodox left-arm spinner for the 19th time in a Test on Sunday when he was dismissed lbw for three by Sri Lanka's Rangana Herath.

At tea on another rain-reduced day, England were 344 for four in reply to Sri Lanka's 400 all out. 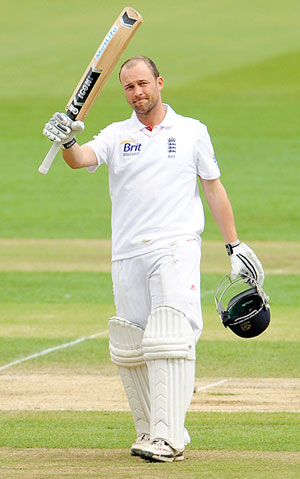 Jonathan Trott was 147 not out at the interval with Ian Bell on 28 after England had lost the wickets of Alastair Cook (133) and Pietersen in the session.

Sri Lanka's initial success, on a day that began 210 minutes late due to rain, was that of prolific opener Cook. He added just four runs to his overnight score when he was undone following a rare loose stroke that ended a stand of 251 with Trott.

Cook, after compiling his fifth century in eight Tests, tried to square drive a short Farveez Maharoof ball over gully off the back foot but managed only a faint edge to wicketkeeper Prasanna Jayawardene. He had faced 274 balls and struck 10 fours.

Pietersen, in his first Test innings since surgery on a double hernia, had to face Herath immediately.

A delivery kept low and skidded wickedly on to his pad and then bat. Umpire Billy Doctrove rejected the appeal but Sri Lanka were successful with the review.

Pietersen was stationary for about 15 seconds before leaving the field, clearly disappointed not to be given the benefit of any doubt.

The amount of time lost to rain means a result is unlikely but the slow pitch pitch has started to misbehave.

Trott left one Herath delivery in the 96th over which spun sharply out of the bowlers' footmarks outside his leg stump and bounced just over the off.

Bell was aggressive from the outset, charging down the wicket and striking Herath over his head for a six to go to eight. It was England's first boundary of the day and came from the 84th delivery

Trott fed off Bell's positive intent and in the next over drove Maharoof firmly through mid-off for four, although it was exactly what the off-stump half-volley deserved.

Bell was dropped on 19 by Kumar Sangakkara at gully off Maharoof, from an uppish square cut to the seamer.

© Copyright 2021 Reuters Limited. All rights reserved. Republication or redistribution of Reuters content, including by framing or similar means, is expressly prohibited without the prior written consent of Reuters. Reuters shall not be liable for any errors or delays in the content, or for any actions taken in reliance thereon.
Related News: Jonathan Trott, Rangana Herath, Ian Bell, Kevin Pietersen, Farveez Maharoof
COMMENT
Print this article