England's Ian Bell continues to be the leading run-scorer in 2011, thanks to his exploits on India's tour of England. His tally is 950 from eight matches, with an amazing average of 118.75, includes five centuries and two fifties.

India's top run-getter this year Rahul Dravid dropped a place to fourth despite a good showing in the first Test against the West Indies. His place was taken by Sri Lanka's Kumar Sangakkara, who jumped two rungs after a splendind showing with the bat against Pakistan in the just-concluded series in the UAE.

On the bowling front, Pakistan off-spinner Saeed Ajmal leaped five places to No 1 after the series against Sri Lanka. He displaced Ishant Sharma, who dropped to second.

A look at the leading batsmen and bowlers in 2011.

Note: All statistics up to and including the first Test between India and West Indies in New Delhi. 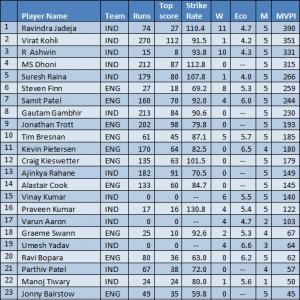