The 2011 Indian Premier League Players' Auction got a thumbs-up from all the ten franchises, with Royal Challengers Bangalore owner Vijay Mallya said, "it was a level playing field" for all the participants.

The original eight franchises were given the option of retaining upto four players with $4.5million dollars being deducted if they did so. The first player retained would cost the franchise $1.8 million from their auction budget, $1.3 million for the second player, $900,000 for the third player and $500,000 for the fourth player.

"When it came to the auction cap for the 2011 edition of the IPL, the president of the BCCI [Shashank Manohar] made it clear that he had no problem with the amount of the cap as long as there was a cap. So various combinations and permutations were discussed amongst franchisees in the same room and it was then agreed that $9 million would be appropriate.

"We cannot disagree with the concept and need for a level playing field. The $9 million was acceptable across the board, maybe one or two might not have been happy. That does not drive the process. There was near unanimity and I certainly was happy with the outcome," Mallya said.

He also cleared the confusion on the ruling saying that it was at the disposition of the franchises as to how much they want to pay the players they opted to retain, and that the money deducted was only from the auction purse. 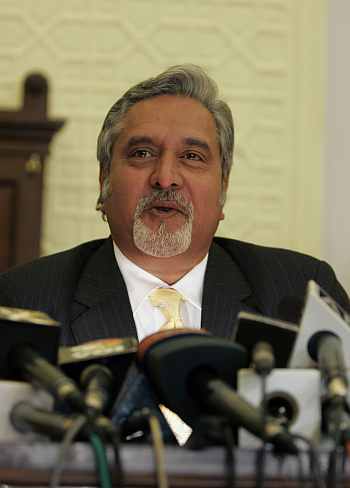 But never once did the IPL say that we are obliged to pay the same amount to the players so it is quite possible that while $1.8 million will be deducted from my auction purse, I need not be paying that player $1.8 million. The IPL is really not concerned with that part," he said.

The business tycoon revealed that the franchises in their various meetings over the course of the last few months had discussed various possibilities of player retention.

"The auction that has just taken place could have been an auction that started from scratch will no retention at all. The concept of retention itself was much debated. There were some franchises who wanted four Indian and four overseas players to be retained. Finally, the IPL governing council came up with a set of guidelines saying you can retain upto four players but in doing so we will deduct specified amount from your auction purse.

"It was universally applicable to all. If you retain four players, half your purse which is $4.5million would be deducted. The governing council never said how much we should pay to those four players. So whether you pay more or you pay less, it is the private arrangement between the franchisees and the players," Mallya said.

Mallya also issued a stern warning to the other franchises saying that they should not lure uncapped or domestic players with huge pay-packets since the amount to be paid to them has already been specified by BCCI.

The uncapped Indian players will have a fixed salary.

Rs 30 lakh pa for players who first played Ranji Trophy (First cl-ass or List A) in the 2005/6 or earlier seasons.

"I would like ask the board to pay particular attention to the terms and conditions laid down for the uncapped players. The board should be vigilant on the players as well as the teams. We have seen the case of Ravindra Jadeja before and you have exercised disciplinary action and we hope you continue to do that in the future, because some of the youngsters have very large expensive ideas and that is the reason why they are not here in this auction," Mallya said.

IPL chairman Chirayu Amin also echoed his views saying they would take strict action against erring franchises on this issue.

"On the issue of uncapped player, we have been communicating officially to all the franchisees. Any speculation done by any governing council member is not valid so we don't endorse anyone talking out except formal communication. We are very clear that we formally communicate whatever policy decisions we take.

(If some franchise is paying more than 30 lakhs) If it comes to our knowledge then definitely strict action will be taken," he said.