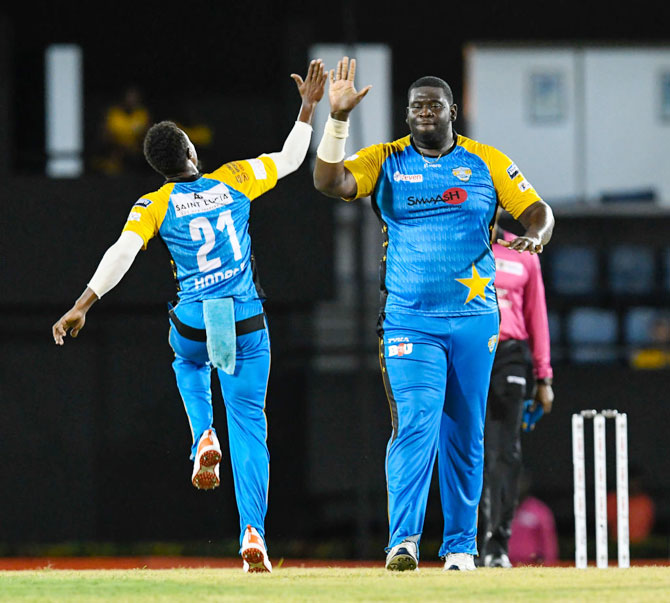 IMAGE: In 2018-19, Rahkeem Cornwall claimed 54 wickets in nine matches at an average of 17.68 to emerge as the leading wicket-taker. In international A-team cricket, most notably in the 2018, he clinched 19 wickets at an average of 18.42 during their 3-0 home series win versus England Lions. Photograph: Randy Brooks - CPL T20/Getty Images

Big-bodied spin bowling all-rounder Rahkeem Cornwall believes he is well-suited to the longest format and credited his consistent performance in first-class cricket to his maiden call-up to the West Indies squad for the Test series against India.

Cornwall first played first-class cricket in 2014 and has 260 wickets from 55 first-class matches along with 2224 runs. He recently scored two half-centuries in two unofficial 'Tests' against India.

"I believe the Test format suits my game because of the consistency a player needs over a long period of time to be successful, and I've enjoyed that challenge so far in my career playing first-class cricket," Cornwall told the Cricket West Indies website.

There is a possibility that Cornwall might make his Test debut during the opening Test which starts on August 22 as part of the World Test Championship.

"The feeling (on getting called up) is great -- it's something I've been pushing to achieve for a long time," said the 26-year-old, who is 6'6" tall and weighs around 140 kilograms and couldn't make it to the squad earlier due to fitness issues.

"The feeling would be great if I was picked in the first Test. I just would want to go out and perform and don't disappoint my friends and family."

In 2018-19, Cornwall claimed 54 wickets in nine matches at an average of 17.68 to emerge as the leading wicket-taker. In international A-team cricket, most notably in the 2018, he clinched 19 wickets at an average of 18.42 during their 3-0 home series win versus England Lions.

In the recent series against the touring India A, Cornwall took nine wickets in six matches.

"The A-team preparation has been very good," he said.

"England Lions and India A were two quality opposition teams featuring guys that played Test cricket. Overall it has been very challenging and it was a good place to test skills that I've been trying to perfect every year in our domestic competition.

"I've been putting in a lot of work over the last couple of months. I've always pushed myself. I feel I can go on and I think the on field results I've achieved have shown the progress I'm making."

"The Test match I remember most watching was Brian Lara's 400 in Antigua 2004. It was early inspiration for sure to become a professional cricketer and to play for the West Indies," he said.

"My cricket hero is definitely Jacques Kallis. The way he carried himself as an all-rounder on and off the field, I've tried to visualise and work to match certain things I saw Kallis to do my game."

© Copyright 2020 Reuters Limited. All rights reserved. Republication or redistribution of Reuters content, including by framing or similar means, is expressly prohibited without the prior written consent of Reuters. Reuters shall not be liable for any errors or delays in the content, or for any actions taken in reliance thereon.
Related News: Rahkeem Cornwall, England Lions, Jacques Kallis, Brian Lara, Cricket West Indies
SHARE THIS STORYCOMMENT
Print this article 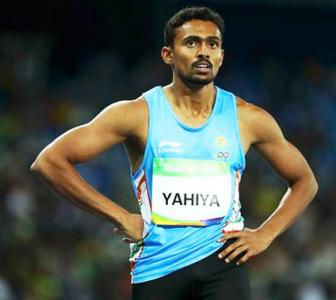 Why Jaspal Rana was ignored for Dronacharya 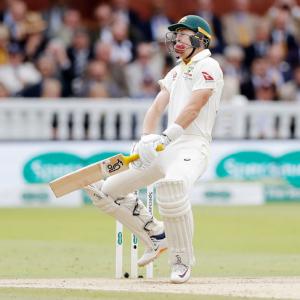