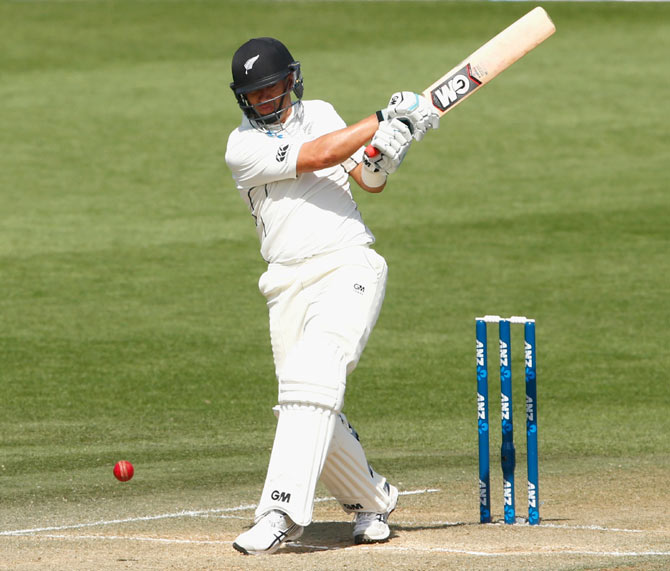 Ross Taylor and BJ Watling scored centuries as New Zealand closed in on victory against hapless Zimbabwe after day three of the first Test in Bulawayo, on Saturday.

Taylor finished unbeaten on 173 and shared a sixth-wicket stand of 253 with Watling (107) to take the touring side to 576 for six declared in their first innings, a lead of 412.

Craig Ervine (49 not out) and captain Graeme Cremer (14 not out) will resume in the morning, with the side hoping to have Regis Chakabva and Sean Williams back after the pair missed the third day through illness.

Zimbabwe came out all guns blazing in their second innings and scored at close to six an over throughout, even as the wickets tumbled.

Hamilton Masakadza (four) steered a Tim Southee delivery to Taylor at first slip inside the first over before Brian Chari (five) was bowled by Boult.

Boult induced an edge from Chamu Chibhabha (seven) to Taylor and trapped debutant Prince Masvaure lbw for a golden duck as Zimbabwe were reduced to 17 for four.

The wicket was a 150th in Tests for the New Zealand seamer.

Ervine and Sikandar Raza (37) launched a counter-attack, adding 69 in under nine overs before the latter became the seventh victim of the match for seamer Neil Wagner with a wild hack at a short delivery that went straight up in the air and was caught by Tom Latham.

Ervine and Cremer delayed what seems the inevitable as they saw the hosts through to the close.

New Zealand had resumed the day on 315 for four and lost only nightwatchman Ish Sodhi (11) in the first two sessions as Taylor and Watling plundered runs.

Taylor brought up his 14th Test century from 191 balls, his first score over 50 in eight Test innings since he his 290 against Australia in November last year.

Watling needed only 169 deliveries to reach his ton, a sixth in Test cricket.

© Copyright 2020 Reuters Limited. All rights reserved. Republication or redistribution of Reuters content, including by framing or similar means, is expressly prohibited without the prior written consent of Reuters. Reuters shall not be liable for any errors or delays in the content, or for any actions taken in reliance thereon.
Related News: Ross Taylor, New Zealand, Trent Boult, Zimbabwe, Craig Ervine
SHARE THIS STORYCOMMENT
Print this article