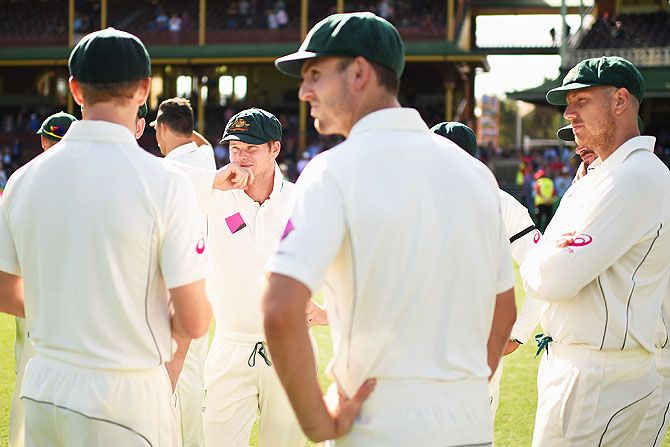 IMAGE: Australia captain Steve Smith talks to his players after winning the series on Day 5 of the third Test against the West Indies at the Sydney Cricket Ground, on Thursday. Photograph: Cameron Spencer/Getty Images

The weather-ravaged, dead rubber third Test between Australia and the West Indies petered out in a draw at the Sydney Cricket Ground on Thursday.

A draw and a 2-0 series victory for the hosts was always on the cards after all but 11 overs of day two and the entirety of days three and four were washed out.

Australia were keen to make claim the series 3-0 and push their claims to return to the top of the Test rankings.

Hence, Australia captain Steve Smith, said he had offered his West Indies counterpart Jason Holder a deal which would have set up the chance of a result but was turned down.

"There was (an approach). Unfortunately they didn't come to the party. I offered him (Holder) 370 runs in 70 overs, which I thought was pretty generous," Smith told reporters.

"It would take some good batting to get that on a day five SCG wicket but they weren't up for the challenge unfortunately."

"They would have had to declare this morning, I would have declared nought for nought and then bowled lob-ups for seven or eight overs or whatever it was, 370 off 70. I offered but they weren't willing to take it.

"We want to try and win every game we play and today was a perfect opportunity to set the game up for a good chase and for the fans who stayed out this afternoon." Holder said West Indies had made a collective decision to spurn the offer.

"We just felt at this stage of our development it wasn't the best thing for us," he told reporters.

"It was a team vote, team decision ... I just think it was the best thing for the team."

"We had (Denesh) Ramdin who was scoring well and looking well, so we just gave him the encouragement to go out there and build an innings and build some confidence.

"We set out at the beginning of the series to bat 90 overs each time we batted and get past the 300-mark.

"That was one of the things that we wanted to achieve today and we achieved that."

Smith said he had checked out the legalities of such a bold move with the team coach Darren Lehmann.

"Yeah, I spoke to Boof (Lehmann) who read through the rules and said you are allowed to do that kind of thing. That was on our cards today and unfortunately they didn't come to the party," he said.

"We can't control the weather. It's been a disappointing week here in Sydney. It would have been nice to have got a bit more play in, but we can't control that. We did everything we could this week."

West Indies, who had resumed on 248 for seven, were dismissed for 330 to bring up lunch before Man of the Match Warner launched his assault in front of 6,000 fans attracted to the ground by free entry. 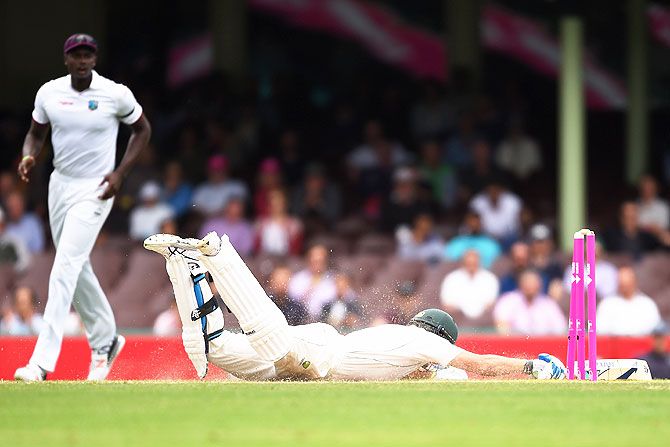 It was a typically aggressive display of batting from the local left-hander, who had notched up 122 not out to help Australia to 176 for two when the players shook hands on the draw.

The 29-year-old hit two sixes and 14 fours in his 103-ball knock, heaping more indignity onto a West Indies bowling attack which took just 12 wickets over the series.

He reached his 16th Test century when he swept the ball down leg side for three runs before leaping into the air in his now traditional celebration of the milestone.

Joe Burns was the tourists' 11th victim, departing for 26 and all-rounder Mitch Marsh made 21 after being promoted up the batting order. Spinner Jomel Warrican claimed both wickets.

Peter Nevill scored seven not out in his only batting opportunity of the series, another illustration of Australia's dominance.

Australia won the first Test in Hobart by an innings and 212 runs before an equally dominant 177-run victory in the second Test in Melbourne but a 2-0 triumph was not enough to lift them above India into second place in the ICC Test rankings.

Adam Voges was named Man of the Series after hitting 269 and 106 in his two innings, both unbeaten. 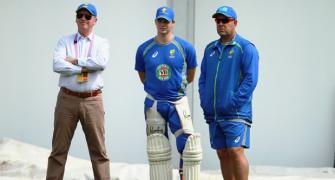 'Being no.1 in all formats is a huge motivation for Australia' 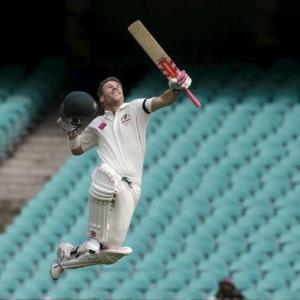 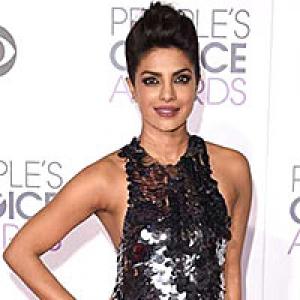