'If the Committee wants to look into it without affecting the image and reputation of some persons, it can consider it'

'So long as no request comes from the Justice Lodha Committee on record, there is no need of passing any order,' says Supreme Court 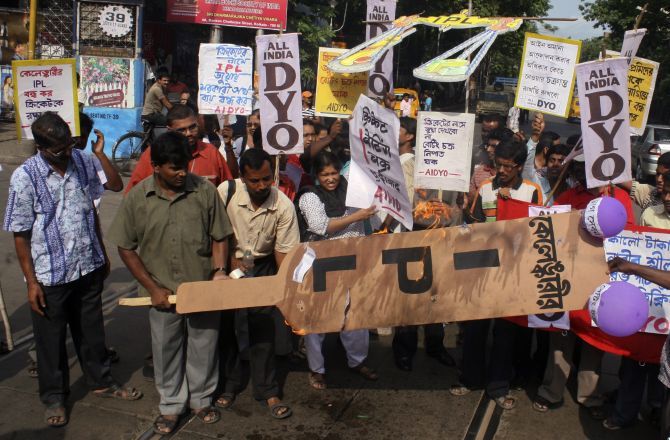 Activists from the All India Democratic Youth Organisation set fire to a cardboard replica of a cricket bat during a protest against the Indian Premier League tournament. Photograph: Rupak De Chowdhuri/Reuters

The Supreme Court on Friday left it to a panel headed by former Chief Justice of India R M Lodha to consider the feasibility of opening and looking into the sealed envelope containing names of players allegedly involved in the IPL spot-fixing case, submitted by Justice Mukul Mudgal Committee.

The apex court said it would be for the three-member panel headed by Justice Lodha, which is considering administrative reforms in the Board of Control for Cricket in India, to take a call on the issue keeping in mind the "image and reputation" of the persons whose names are in the sealed envelope.

"If the Committee wants to look into it without affecting the image and reputation of some persons, it can consider it," a bench comprising Justices T S Thakur and F M I Kalifulla said while declining to go on its own on the plea of Aditya Verma, secretary, Cricket Association of Bihar (CAB), seeking handing over of Justice Mudgal Committee's report, which contains names of some players.

The bench said it was for the CAB to make an application before the Committee, also comprising its two former judges, Justices Ashok Bhan and R V Raveendran, which on considering and examining the records of the matter can consider request of the applicant.

"So long as no request comes from Justice Lodha Committee on record, there is no need of passing any order," the bench said.

Asked by the bench whether the Justice Lodha Committee was meeting lawyers and others, senior advocate Nalini Chidambaram, appearing for the CAB, said "they heard wide spectrum of people".

"Will it change the complexion of the BCCI? Let us see," the bench said while asking the CAB to make an application before the Justice Lodha Committee with its plea.

The bench also accepted the request of the Justice Lodha Committee and extended its term by another five months asking it to complete the ongoing process by December 31.

The CAB claimed that if the entire contents of the third report are not given to the Justice Lodha Committee, the time and effort spent by Justice Mudgal Committee and the probe team would be wasted.

It said even the heavy expenditure incurred by the respective governments will go "totally waste".

The plea had sought a direction to the Supreme Court Registry to hand over to Justice Lodha panel, the first report and full text of Justice Mudgal Committee's third report which was submitted in the apex court on November 1 last year.

ensure that in future the reputation of the game of cricket will not be sullied by any scam.

"If the full text of the third report is not given to the Justice Lodha Committee, the time and effort spent by Justice Mudgal Committee and the investigating team and the heavy expenditure incurred by the respective governments will go totally waste," the CAB application had said.

It said the probe committee's final report contains the allegations against the 13 persons, including Narayanswami Srinivasan, and the sealed cover was not given to anybody and is lying with the Supreme Court Registry.

"Pursuant to the order of this court, the Justice Lodha Committee has published the first portion of their report on the punishment to be imposed on Gurunath Meiyappan, Raj Kundra and Chennai Super Kings and Rajasthan Royals. The committee is considering administrative reforms for BCCI and has sought time till end of December this year to complete it work," the

The apex court-appointed a three-member committee of retired judges headed by Justice Lodha was entrusted the job of further investigating the IPL-6 scandal, including the allegations against the then BCCI COO Sundar Raman.

The Justice Lodha Committee had in July decided the quantum of punishment against ex-BCCI president N Srinivasan's son-in-law, Meiyappan, who was also a CSK official, and Raj Kundra, co-owner of Rajasthan Royals, who both were held guilty of betting.

With regard to allegations against Sundar Raman, the apex court had said it cannot go "unprobed" and had directed the Justice Lodha Committee to further investigate the averments against him, saying "truth must be brought to light".

Meiyappan, a former Team Principal of India Cements Ltd (ICL)-owned franchise CSK and Kundra, co-owner of Jaipur IPL that runs Rajasthan Royals (RR), were suspended for life from any matches conducted by BCCI.