Sachin Tendulkar became only the fourth batsman in Test cricket to complete 9,000 runs when his score reached 36 during his unbeaten knock of 73 on the opening day of the fourth and final match at Sydney. 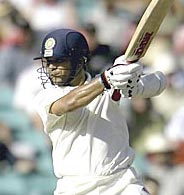 Despite his recent run of failures, Tendulkar has achieved this milestone in the least number of innings, 179, though he has taken one match more than Sunil Gavaskar.

At 30 years 253 days, Tendulkar is also the youngest batsman to complete 9,000 runs. All others were above the age of 35 when they accomplished this feat.

Interestingly, his only real challenger now for the top rank, West Indies captain Brian Lara, is just 84 short of 9000 Test runs. The Lara-Tendulkar battle promises to be an exciting one over the next three or four years.

Tendulkar's performance at each venue:

Tendulkar's performance in each calendar year: