Highlights on the second day of the second and final cricket Test between India and New Zealand in Bangalore on Saturday.

# Pragyan Ojha (5-99) has registered his third instance of five wickets or more in an innings in Tests - his first two instances being against the West Indies.

# For the fourth time in a two-Test series, three instances of five wickets or more in an innings have been recorded for India - once each against Pakistan, Bangladesh, New Zealand and Zimbabwe.

# Ojha is the third bowler to capture five wickets or more in an innings for India against New Zealand at M Chinnaswamy Stadium, Bangalore - the first two Indian bowlers being Narendra Hirwani - 6-59 in November 1988 and Anil Kumble - 5-81 in October 1995.

# Doug Bracewell (43 off 79 balls) has recorded his career-best innings in Test cricket.

# Virat Kohli has managed 440 runs at an average of 62.85 in five Tests this year - the most by an Indian in Tests in 2012. His tally includes a century and three fifties.

# Kohli's second half-century against New Zealand is his fifth in Tests. His brilliant unbeaten 93 off 174 balls is his second highest score in Test Cricket, behind the 116 against Australia at Adelaide in January 2012.

# Suresh Raina (55 off 90 balls) has posted his seventh half-century in Tests - his first against New Zealand.

# Raina's superb knock is his second half-century in nine innings on Indian soil - his highest is 86 against Australia at Mohali in 2010-11.

# Tim Southee (3-35) has registered his best bowling figures against India.

# The 104-run unbroken partnership is India's sixth highest against New Zealand in Tests. Dhoni figures in four such stands.

# Sachin Tendulkar became the third batsman to be bowled 50 times or more in Tests. Rahul Dravid (55) and Allan Border (53) top the charts.

# Kruger van Wyk (71 off 100 balls) has registered his highest score in Tests. 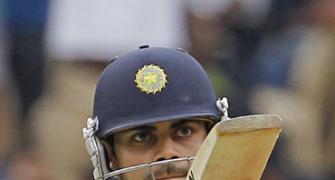 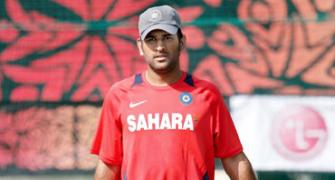 Dhoni, Kohli in contention for ODI Cricketer of the Year 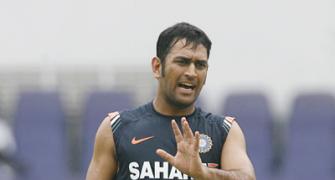 'Team India needs a big knock from either Kohli or Dhoni' 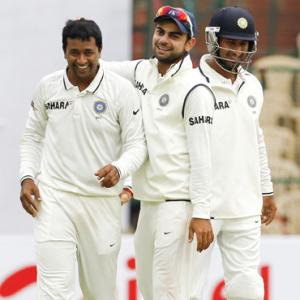