Statistical highlights of the third One-dayer between India and Sri Lanka played in Colombo on Saturday.

# Suresh Raina (65 not out off 45 balls) recorded his 23rd half-century in ODIs -- his seventh against Sri Lanka.

# Raina's strike rate of 144.44 is his fourth highest and the highest against Sri Lanka in an innings in ODIs when he has posted a fifty-plus innings.

# Angelo Matthews registered his 11th fifty in ODIs -- his second against India.

# Matthews's superb strike rate of 124.56 is his best when he has recorded at least a fifty.

# Gambhir recorded his 11th century in ODIs -- his sixth against Sri Lanka.

# India (288 for five) registered the highest successful chase at Colombo (RPS), outstripping their record of 271 for two against England on September 22, 2002.

# India's score is the highest successful chase by a team against Sri Lanka in Sri Lanka.

# The score is the second highest successful chase by a side in Sri Lanka -- the highest is 289 for four by Sri Lanka against Pakistan at Dambulla on August 3, 2009.

# Jeevan Mendis's unbeaten 45 is his second highest score in ODIs -- his highest is 48 against England at Old Trafford on July 9, 2011.

# Matthews and Mendis have shared an unbroken stand of 104 off 72 balls -- Sri Lanka's highest sixth-wicket partnership against India in Sri Lanka -- the highest for Sri Lanka for this wicket position.

# Mahela Jayawardene's 17th half-century against India is his 68th in ODIs.

# Kumar Sangakkara posted his 73rd fifty in ODIs -- his 16th against India.

# Jayawardene and Sangakkara have added 121 -- Sri Lanka's highest for the fourth wicket against India. The pair became the first Sri Lankan pair and the fourth to register 30 century stands or more in international cricket.

# Sangakkara-Jayawardene pair has emulated the feat of Marvan Atapattu and Sanath Jayasuriya for sharing 14 century partnerships (a Sri Lankan record).

# For the first time, Rohit Sharma has registered two ducks in a row. He has posted five ducks against Sri Lanka -- eight in ODIs.

# Raina and Pathan were associated in a stand of 92 (unbroken) -- India's second highest against Sri Lanka for the sixth wicket. Ravindra Jadeja and Suresh Raina had added 106 at Dhaka on January 13, 2010. 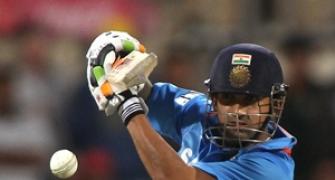 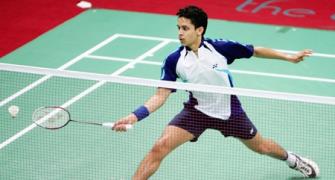 PIX: Kashyap the saving grace on gloomy day for India 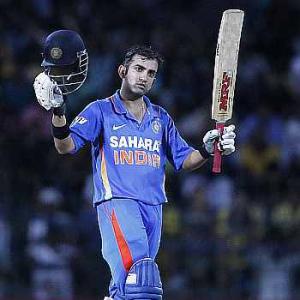 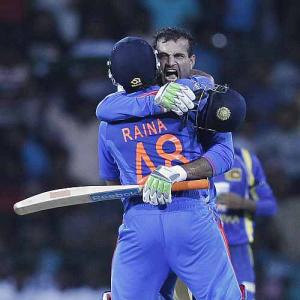