England will play a "winner takes all" Twenty20 fixture against a Caribbean team for a record prize pot of $20 million on November 1, Texan billionaire Allen Stanford confirmed in London on Wednesday.

The match is the brainchild of Antigua-based Stanford, the chief executive of the Stanford Financial Group, who is putting up $100 million for five annual clashes between England and the Stanford Super Stars.

The 11 active players on the winning side will walk away with $1 million each with a further two million going to squad players and coaching and management staff.

Seven million dollars will be shared between the England and Wales Cricket Board (ECB) and the West Indies Cricket Board (WICB), both of whom have been heavily involved in the getting the series off the ground.

Stanford arrived for the lavish launch at Lord's, the traditional home of world cricket, in a gleaming black helicopter and was flanked by some of the greats of West Indies cricket, including Garfield Sobers, Desmond Haynes, Viv Richard and Curtley Ambrose.

"The winners of this match will go home very happy, the losers very unhappy," Stanford, who makes no secret of his dislike of the five-day Test format of the sport, told reporters before a glass case containing $20 million was unveiled. 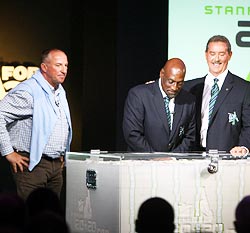 Asked why he was backing the series with his own money, Stanford said he is determined that it would help West Indies get back to the top of a sport they once dominated.

"I'm investing in the future of the West Indies game," he said. "We are at the bottom of the 12th right now," he added, using baseball terminology.

"It breaks my heart to see us at the bottom. I want to take West Indies cricket from the bottom to the top where it belongs.

"The Stanford 20/20 for 20 will be a highly anticipated event, not just because of the prize money, but because of the traditional friendly rivalry that exists between England and the West Indies."

The match, which will take place under floodlights at the Stanford Cricket Ground in Antigua, has been authorised by the International Cricket council (ICC) although it will not be an official fixture.

"We are extremely delighted that Allen has chosen to work in partnership with the ECB," he said.

"We are not trying to appease players but give them the chance to show that they can play under a different sort of pressure."

The Stanford Super Stars will be selected from active players from the 2006 and 2008 Stanford 20/20 tournaments that have proved popular in the Caribbean.

Black bats and silver stumps will add to the spectacle of the Twenty20 format which Stanford believes is the future of cricket.

"Twenty20 has the potential to become the dominant team sport in the world," he said.

"That's why I chose to work with the ECB. They have the best management structure to drive the sport. This is where the game started."