Bradman and some humorous anecdotes

Greig, who was a member of the star-studded Rest of the World team which played against the mighty Australia, landed in Adelaide for a tour game along with the other players in the team. A simple looking man who introduced himself as "Don" met them at the airport. The fellow loaded the players' bags on to the coach, drove them to the hotel and returned home only after helping them to their rooms.

It was not until the next day when Greig saw with a bewildered look on his face a swarm of journalists chasing their "driver" for an interview that the penny really dropped. He was simply shell-shocked when he realised that their unassuming "driver" Don was actually Don Bradman.

One wonders if Greig had dared give a generous tip to the "driver" the previous day! 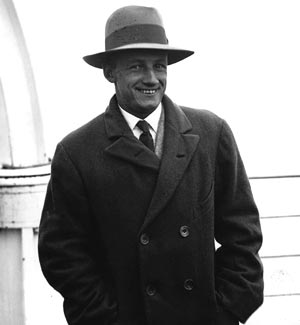 And this was one of the secrets of his astonishing success with the bat.

Bishen Singh Bedi, who led the Indian team to Australia in 1977-78, revealed an interesting incident that proved Bradman's supreme command over the willow. And the great man had retired from the game 30 years ago.

Bradman was the cynosure of all eyes at a party for the Australian and Indian teams at a friend's place in Adelaide. Though he had not held the bat for ages, he was "cajoled" to wield it and play a few shots in the huge backyard. He removed his coat and got ready to bat. Jeff Thomson, who was known as Thommo and was the fastest bowler in the world at the time and had terrorised many batsmen with his brutal pace and menacing bouncers, was given the ball. The guests-turned-spectators held their breaths to see the spectacle.

"What we saw was sheer magic," recalled Bedi. "The grand old man's positioning was impeccable. And he was without any pads or gloves or the damned box. Thommo let one go on the leg and middle and was promptly on-driven effortlessly."

Then, putting an elderly hand on the young man's shoulder, he told Thommo in his characteristic critical style: "This will teach you to have a mid-on for me, son!" Needless to say, Thommo was speechless.

On another occasion Bedi was "talking to Bradman", or rather "listening him to talk". The subject turned to "modern-day bowling methods". The master left-arm spinner asked the Don whether he felt he would have got the same number of runs that he did if he had played cricket in the "modern era".

Bradman "agreed" that "modern cricket" had become "more calculated" and that "run-preventing had taken precedence over wicket-taking". Bedi said Bradman's "modest summing up" of his own ability vis-à-vis the "present-day game" had "all the virtues" which go with "authentic" analysis.