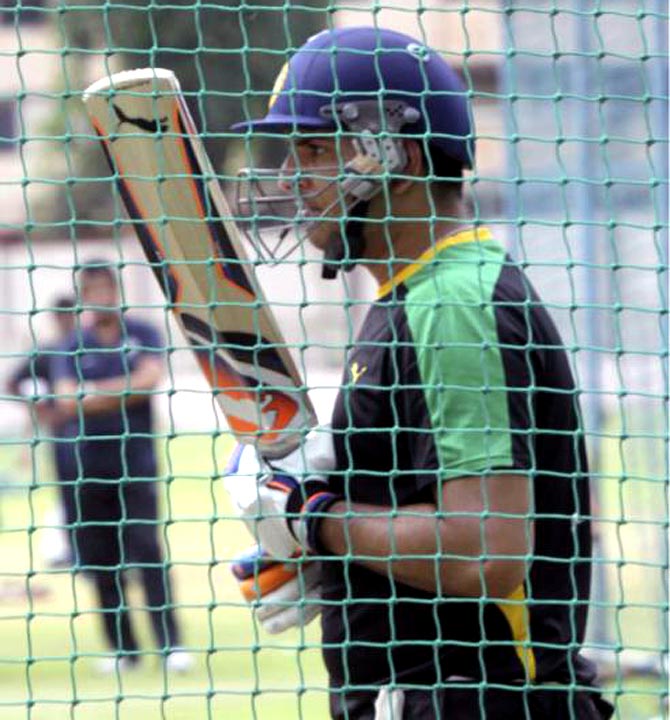 There was good news for India ahead of the World T20 semi-final against South Africa as in-form Yuvraj Singh batted for a long time during the team's net session in Fatullah on Thursday, giving the coach and captain a chance to assess how his injured ankle was shaping.

While there was no official word on his availability for the game, his stint at the nets was an indication that he is fit to play.

"Yuvraj is fit to attend practice today," media manager Dr R N Baba had said at the press conference prior to the team's departure to Fatullah for the net session.

Yuvraj suffered an injury to his left ankle while playing football barefoot during a training session a couple of days back.

Like Wednesday, football was not part of the team's training session on Thursday and the players again headed towards the nets on arrival.

While Yuvraj walked around gingerly, he apparently showed little signs of discomfort during a 30-minute session at the nets.

He spent the longest time at the nets while some of the other top batsmen like Mahendra Singh Dhoni, Virat Kohli and Rohit Sharma wrapped up their session quite quickly.

None of them batted for more than 15 minutes as the emphasis was on hitting big sixes.

The footwork was perfect as Yuvraj lofted the spinners, coming to the pitch of the ball. He also looked at ease against the pacers.

While he was comfortable while batting, he did take part in the fielding session for some time and took some running catches even as physio Nitin Patel kept a close watch on his progress.

Learnt a lot about captaincy from Dhoni: Faf du Plessis 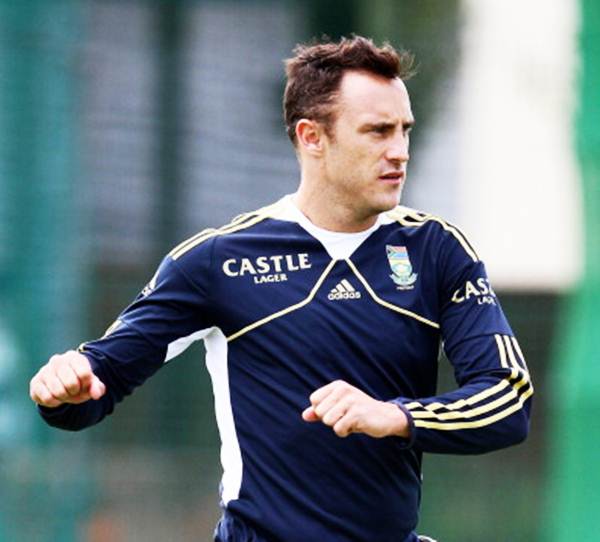 South Africa skipper Faf du Plessis said though he learnt a lot from Mahendra Singh Dhoni during his stint with Chennai Super Kings in the IPL, he would be relying on his own style of captaincy when his team takes on India in the semi-finals of the ICC World T20.

"I've really enjoyed my time in Chennai and my time with MS. I have been there now for three years. I have learnt quite a bit from him as a captain. He is a very good and an inspirational leader and he has had huge success for India. His record speaks for itself.

"My style of captaincy is completely different to his," Du Plessis said, when asked if he learnt some tricks of the trade from Dhoni.

Du Plessis said India are the "favourites" and his team "underdogs".

"We felt a couple of times before that this was our time. India are still regarded as one of the favourites and we have played pretty much through the whole tournament as underdogs.

"We have been playing very well as a team and we have had different guys performing in every single game, so we are not relying on someone. It's important to play the key moments well. It is a high pressure game and if you make the right decisions on the day you will be on top," he said.

He admitted that India would have an advantage going into the match, having played all their matches at the Sher-e-Bangla Stadium in Mirpur.

"From a conditions point of view, they are much more used to them than we are and we have put in some really hard practice to speak on really abrasive surfaces making sure that we almost over-practised against the ball that is turning too much," he observed. 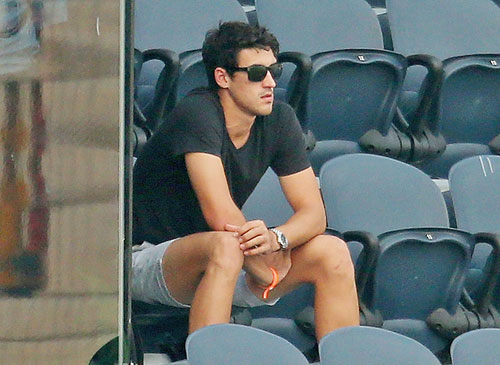 Behind every successful woman, there is a man. At least Australian women's team stumper Alyssa Healy would not find any reason to differ.

As the Australian women's team went through the paces on the eve of their World T20 semi-final against the West Indies, a strapping young man was seen entering the Club House arena of the Sher-e-Bangla Stadium unnoticed.

It was Mitchell Starc, the Australian fast bowler who has stayed back to support his girlfriend Alyssa for her important knock-out matches.

Wearing a black polo neck and white three quarters, Starc quietly entered and showed his ticket to the security staff, which guided him towards the VIP lounge.

‘Are you here to support the women's team?

“They have done much better than the men's team, haven't they?” replied Starc.

‘So there will be some support for Alyssa, right?’

"Yeah, I have definitely come to support her and hope she does well. I have just stayed back to spend some time with her," he smiled, as he stopped the lift to speak.

‘A holiday after the tournament gets over?’

"Yeah, I suppose, we would take a break."

Well, Starc's presence certainly made the difference as Healy's 21-ball-30 was an important factor in the team's eight-run victory of the Windies and a spot in the final. 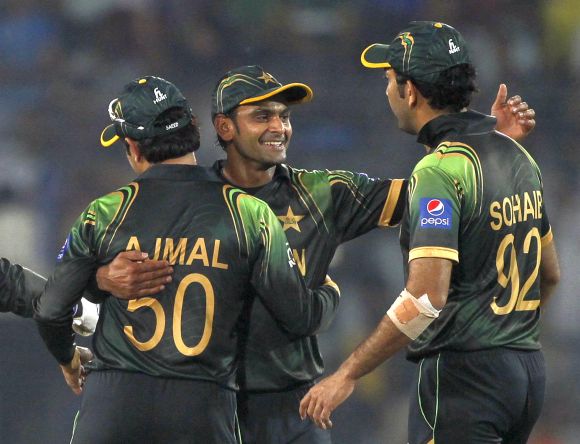 Mohammad Hafeez has stepped down as Pakistan's T20 captain after their early exit from the World T20 tournament in Bangladesh.

All rounder Hafeez announced he was stepping down as the T20 captain and also as vice-captain of the Test and one-day sides in Lahore on Thursday after a meeting with Pakistan Cricket Board (PCB) chairman Najam Sethi.

"As captain I take responsibility for our performance and I have decided to step down. I will be available as a player for all formats," Hafeez said.

Pakistan was soundly beaten by West Indies in a do or die match last Tuesday which put them out of the World T20 - a tournament in which Pakistan had always qualified for the semi-finals since its inception in 2007.

"It was a decision I took after much thought and I apologise to the people who have always supported me for our performance in the tournament," he said.

Hafeez said no one had pressurised him to step down.

"Now whoever the board appoints as captain I will be there to support him," he said. "I have played under captains as well and always given my best."

The PCB chief met with Hafeez and the head coach of the team, Moin Khan and senior cricket consultant Zaheer Abbas on Tuesday to discuss the performance of the team.

Asked if had also contemplated stepping down as head coach, former Test captain Moin Khan said his contract with the board was for two tournaments and it was over now.

"Our contracts are over now and not everyone can take responsibility," he said. "I think Hafeez has set a very healthy precedent by taking responsibility for the team's performance."