News
Business
Movies
Sports
Cricket
Get Ahead
Money Tips
Shopping
Sign in  |  Create a Rediffmail account
Rediff.com  » Cricket » Savage attack on me because I have Dhoni, says Srinivasan

Savage attack on me because I have Dhoni, says Srinivasan 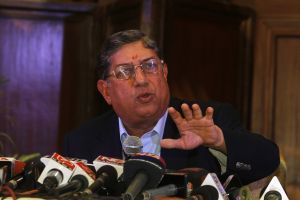 Board of Control for Cricket in India president N Srinivasan, who stopped discharging his duties after his son-in-law Gurunath Meiyappan was named in the IPL spot-fixing scandal, slammed his detractors on Friday, saying they are jealous of his franchise, Chennai Super Kings, because India captain Mahendra Singh Dhoni is part of it.

Interacting with a group of students and academicians at Chennai’s Alagappa College of Technology, Srinivasan said he would have had no problems had Dhoni not been in his squad.

"Why do you think people are jealous of CSK? It is because of Dhoni. There was a savage attack on me because I have Dhoni," Srinivasan said.

Srinivasan’s name was dragged into the IPL ‘fixing’ saga after Meiyappan was arrested for allegedly betting in matches of the sixth edition of the cash-rich Twenty20 tournament that was held in April-May.

Following the controversy he stepped aside and Jagmohan Dalmiya took over as interim head of the BCCI.

Srinivasan was effusive in praise of Dhoni, saying he is an "outstanding leader and innovative captain”.

“On the field Dhoni never shows his emotions and is an intelligent cricketer and simple man.

"Former Indian coach Gary Kirsten once said that on the field, no one can equal Dhoni as a captain," he said.

Besides being India’s most successful captain, having won the Twenty20 and 50 overs’ World Cup, Dhoni led Chennai Super Kings to IPL crowns in 2010 and ’11 and the Champions League T20 title in 2010.