Sachin Tendulkar's farewell game in domestic cricket ended in a manner befitting his iconic stature. The retiring legend single-handedly guided Mumbai to a four-wicket victory over Haryana in one of the most keenly followed matches in the history of the Ranji Trophy, in Lahli, on Wednesday.

Requiring 39 runs to win with four wickets in hand on the fourth and final day, Tendulkar, overnight on 55, went on to score a calculated 175-ball unbeaten 79, building his innings in the manner that has been the hallmark of his later years.

The stay in the middle also ensured he warmed up for next month's Test series against the West Indies, which will culminate with the second and his landmark 200th Test, in Mumbai. It will bring down the curtain on his glorious 24-year tryst with international cricket.

- Farewell Sachin... write a postcard to the batting icon

After a series of shifts in momentum over the past three days, it was Mumbai who had the last laugh, thanks largely to the relentless perseverance showed by Tendulkar.

Resuming the final day on 201 for 6, Mumbai played with utmost caution and went about collecting the runs in mainly ones and twos. Tendulkar got good support from Dhawal Kulkarni (16 not out), who hit the winning runs, stroking pacer Mohit Sharma down the ground for a boundary.

The hordes of home spectators who trooped to the Chaudhary Bansi Lal Cricket Stadium didn't mind either as it was Tendulkar who was at the forefront of this successful chase.

Living their own Tendulkar moment, the heads totting the small stands fervently cheered his every run, and got an adrenaline rush the only time the ball reached the fence from the master's willow.

The standing ovation as he walked out to bat in the morning was followed by a guard of honour, with some Haryana players even saluting the champion batsman as he walked on to bat for one last time in domestic cricket.

Tendulkar being lifted on the shoulders of his teammates was also to be expected.

Though he hit just one boundary on Day 4, it was worth it. As Harshal Patel ran in, Tendulkar positioned himself perfectly before punching the fast bowler through backward point. All in all, he struck six boundaries in the innings.

The innings was in stark contrast to the one he played against the same side some 22 years ago, in the final of the Ranji Trophy at the Wankhede stadium, where he smashed Kapil Dev and Co to all corners of the ground.

This knock was more about grafting. The defence was tight, the big stride forward gave the picture of a man in total control of the situation, and then there were the trademark back-foot punches through cover off fast bowlers.

He also scored quite a few runs through tucks to the square leg region, nudges towards mid-wicket besides sprinting singles to mid-on and mid-off. 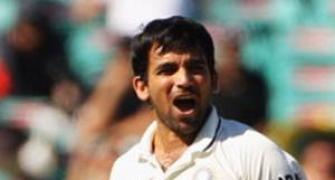 Zaheer strikes late as Haryana fight back through Joginder, Sunny 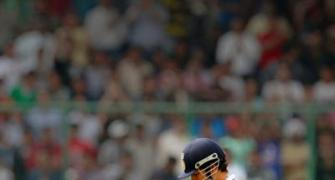 Tendulkar disappoints but Mumbai on top in Ranji match vs Haryana 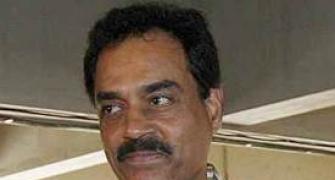 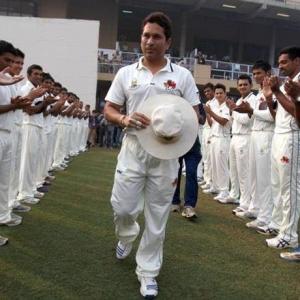 PHOTOS: Tendulkar signs off from Ranji with match-winning knock Tendulkar's unbeaten 55 keeps Mumbai on course for win over Haryana