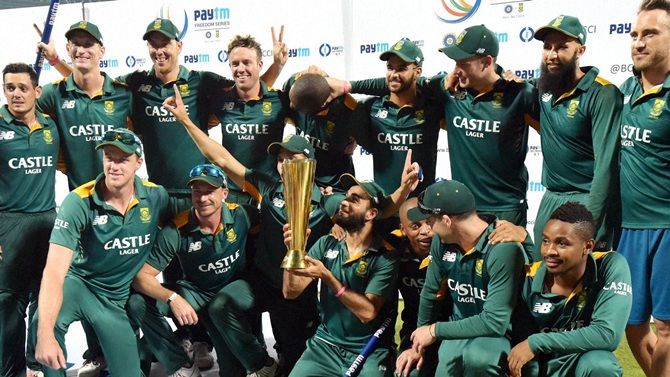 IMAGE: South Africa's players pose with their trophy after winning their fifth and final ODI match against India in Mumbai. Photograph: PTI Photos With the five-match series tied at 2-2, de Villiers won the toss and opted to bat in hot and humid conditions and could not have been a happier man at the close of their innings as his team matched their second highest score in the 50-over format.

A 58-ball 87 from local boy Ajinkya Rahane and a 60 from out-of-form opener Shikhar Dhawan brought some cheer for the crowd but it was never going to be enough for the hosts, who folded for 224 inside 36 overs.

Kagiso Rabada took four wickets while pace colleague Dale Steyn took three for the touring side to complete a 3-2 series win, their first in ODIs in India.

It was only the second time that a team had scored three centuries in an ODI innings after South Africa did it against West Indies in January this year on their way to their highest total of 439 for two. De Kock (109) continued to make merry against the Indian bowlers, scoring his fifth century in nine innings against the opponents after South Africa had lost Hashim Amla (23) early.

The left-hander hit 17 fours and a six on his way to his eighth ODI hundred and laid the perfect platform for de Villiers's onslaught with a 154-run stand with du Plessis (133 retired hurt). India compounded their misery by dropping catches and du Plessis made the most of his good fortune to score his first century against India and his fifth overall after being put down twice, on 45 and 85.

The right-handed batsman suffered severe cramps during the later part of his innings and had to retire but had added 164 runs with de Villiers for the third wicket before that. De Villiers, the owner of the record for the fastest hundred in the format, needed no invitation to launch into the Indian bowlers with the stage set perfectly for his pyrotechnics.

The 31-year-old reached his century, his 23rd in the format, in just 57 balls and cleared the boundary ropes with ease. The right-hander hit 11 sixes and three fours in his knock.

India medium paceman Bhuvnehwar Kumar ended with figures of 1-106 in his 10 overs, the second most expensive in ODIs behind Australian Mick Lewis's 0-113 against South Africa in 2006.

The two sides will play a four-Test series with the first match starting at the Northern Indian city of Mohali on Nov. 5.

© Copyright 2022 Reuters Limited. All rights reserved. Republication or redistribution of Reuters content, including by framing or similar means, is expressly prohibited without the prior written consent of Reuters. Reuters shall not be liable for any errors or delays in the content, or for any actions taken in reliance thereon.
Related News: South Africa, PTI Photos, ODI, AB de Villiers, Quinton de Kock
COMMENT
Print this article 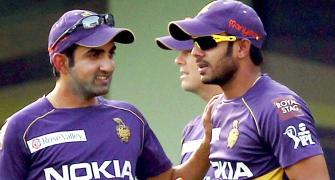 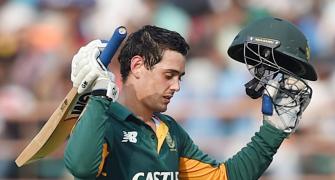 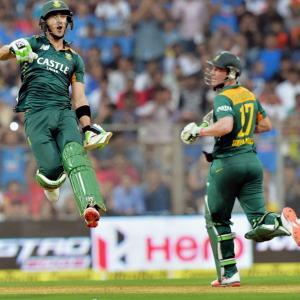 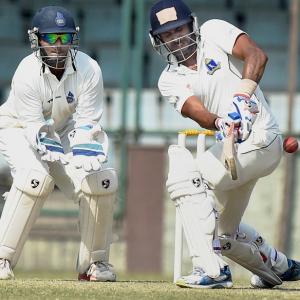