News
Business
Movies
Sports
Cricket
Get Ahead
Money Tips
Shopping
Sign in  |  Create a Rediffmail account
Rediff.com  » Cricket » '2021 one of the greatest years in Indian cricket' 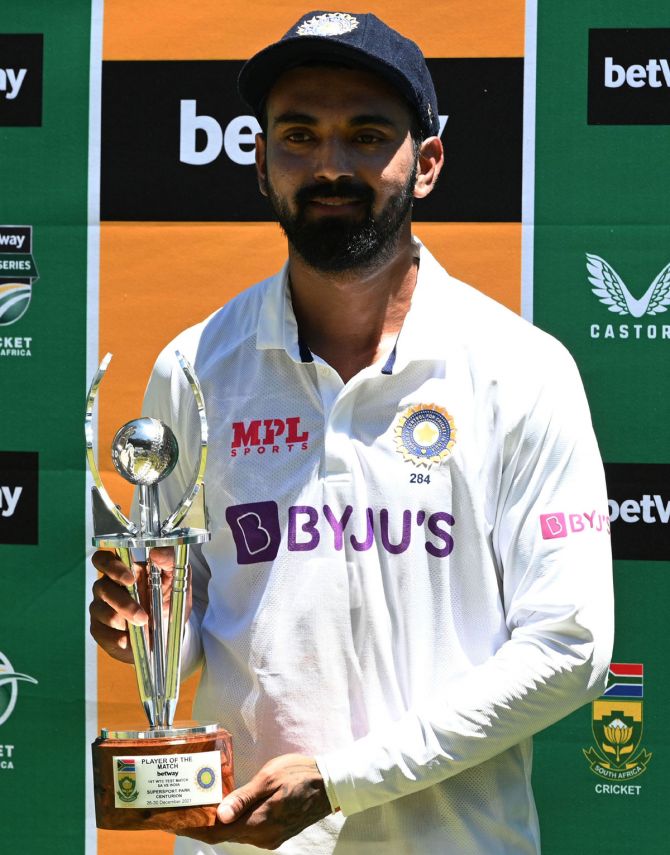 IMAGE: KL Rahul was named the man of the match for his century in the first innings of the first Test against South Africa, in Centurion, on Thursday. Photograph: Lee Warren/Gallo Images/Getty Images

From a near impossible win at the Gabba with a second-string side to walloping a hapless South Africa in their own backyard, 2021 can easily go down in the annals as 'one of the greatest in Indian cricket', opener KL Rahul asserted on Thursday after his side breached the Centurion fortress.

Between the start and finish of the year, India also recorded creditable Test victories against England at Lord's and The Oval.

Rahul was an architect in all these milestone wins on more than one occasion. He had scored a hundred in India's famous win at Lord's.

Having set the tone with his first innings hundred, the stand-in vice-captain for the South Africa series summed up the year after India became the first Asian nation to win a Test at the Supersport Park in Centurion.

"It's a super super special year for team India. The kind of achievements that we have gotten this year has been truly special. I think it will go down as one of the greatest years in Indian cricket history," Rahul said after the crushing 113-win run against South Africa in the first Test.

"It has taken a lot of hardwork and discipline. We have worked really hard as a team for few years," added Rahul.

The great dressing room atmosphere has also contributed to a great performance and not to forget the preparation part, said Rahul.

"Yes, the dressing room atmosphere is amazing at the moment. It is a great Test victory. No Asian team has come here and won in Centurion and (it speaks of) kind of work we have put in, in last two weeks leading up to this Test match.

"We worked really hard as a team and we really had a lot of fun at training and at practice," the senior opener said.

Rahul termed it as a complete team performance having set the tone in the first game of the series.

"To go out there in the first game of the series and put up a performance like that which is a complete team performance, it makes us happy.

"We can enjoy this victory for a day and get back to training and start focussing on the next Test match," said Rahul.

The second Test starts in Johannesburg, from January 3.