After a poor run of scores in the two Twenty20s, five ODIs and first Test against the Proteas, Shikhar Dhawan came good with an unbeaten 45 in the Bengaluru Test.

Harish Kotian/Rediff.com explains why skipper Virat Kohli is backing his opening batsman to carry on the good form in the next two Tests of the series. 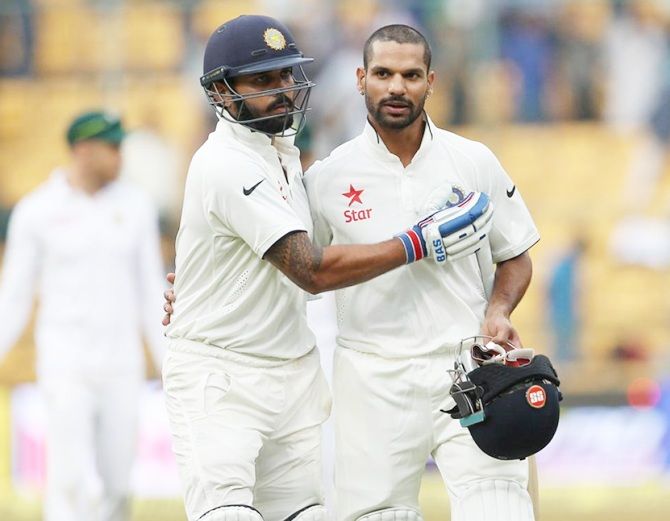 The biggest positive for India from the rain-hit, drawn second Test against South Africa in Bengaluru was opener Shikhar Dhawan’s return to form.

The left-hander had struggled against the Proteas since the start of their tour of India. He failed in the two Twenty20 matches, scoring 3 and 11, before registering just one half-century in the five One-Day Internationals.

The record got even worse in the first Test in Mohali, as the Delhi opener bagged a ‘pair’, out for ducks to pacer Vernon Philander in both the innings.

However, he made a timely return to form with a breezy knock of 45 not out on Day 1 of the Bangalore Test much to the relief of captain Virat Kohli.

“We had a really positive Day 1, bowled out the No 1 side in under three sessions, bowled them out on a decent batting wicket.

"There were no demons in the wicket, I can say, for sure. We batted pretty well for whatever time we had in the middle. Shikhar getting some runs was a big positive as well,” said Kohli, at the end of the Bengaluru Test on Wednesday. Dhawan’s place in the side had come under the scanner during the tour of England last year when he was dropped after failing in the first three Tests and replaced by Gautam Gambhir, who also failed to seize the opportunity.

The trend continued in Australia; the left-hander again struggled to make an impact in overseas conditions. Except for an 81, which he scored in the second Test in Brisbane, he had nothing to show from the other five innings and was promptly replaced by the young K L Rahul, who scored a century on debut in the fourth and final Test in Sydney.

However, Rahul was forced to miss the one-off Test against Bangladesh, in Fatullah, because of fever and Dhawan made most of the opportunity on his comeback to the team, slamming an entertaining 173 in the rain-hit, drawn match, and extended the good form to the first Test against Sri Lanka in Galle, where he stroked 134.

However, a fracture on his right hand while fielding in the slips during the first Test saw the left-hander miss the two remaining matches in the series.

And despite his poor returns in the limited-overs’ series against South Africa, Kohli was quick to draft him into the Test team, ahead of Rahul, who hit a century in the second Test in Colombo but followed it up with three failures.

"If you call scoring two hundreds in three Test matches struggling, then I don’t know what 'in-form' is. His last three matches... he has got a hundred in Galle, he has got a hundred in Bangladesh. Unfortunately, he got injured and after that he played his first match in Mohali. So let’s not be too hard on someone because of two innings or three innings," reasoned Kohli. 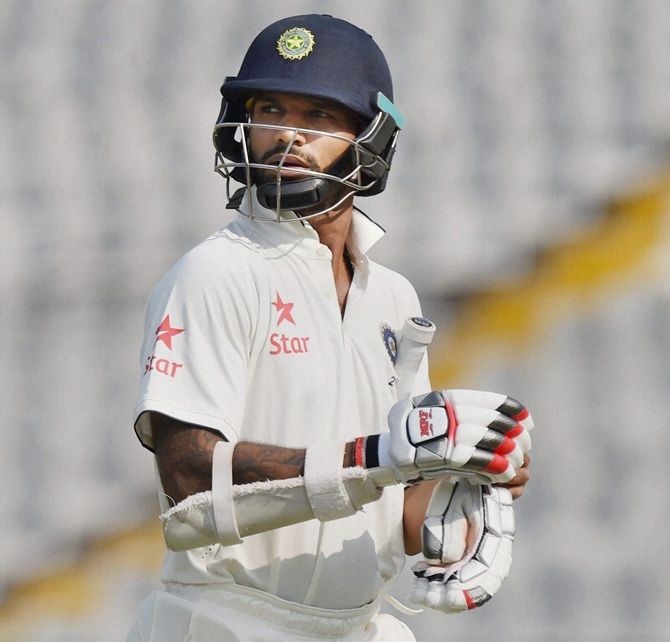 Dhawan made an instant impact in Test cricket, blasting an entertaining 174-ball 187 on debut in the Mohali Test against Sri Lanka in 2013. In the process, he registered the fastest century by a debutant in Test cricket, getting to the landmark off just 85 balls.

Aware of the impact the opener can have on a game if he gets going, Kohli appealed to everyone to be patient with him.

"This is international cricket; you are going to play numerous innings and we have to be patient with players like Shikhar because he is an impact player and we need to give him as much confidence as we can possibly. When he gets going he wins you the game and that is a surety. He is that sort of player who can take the game away very quickly."

Kohli was of the view that Dhawan could have got a hundred had four days’ play not been washed out in the Bengaluru Test.

"I don’t think he has been out of form; he has been batting beautifully. Sometimes you will not get the scores that you desire, but it is important how you are playing at that moment. He is suddenly hitting the ball very well and, as I said, he got runs here, which is good for his mental set-up. We don’t see any issues with his batting or his confidence for sure. We have to let the individual sort of come into his own, not put too much pressure on him. I am sure he is happy with the way he batted here (Bengaluru) as well. If he had more overs to bat he would have been 70 or 80 not out or possibly could have got a hundred as well if we had some amount of game left.

"I am delighted he is feeling good about his batting at the moment and I am sure he would want to score big runs in this series and in future as well. Every batsman wants to!"

- Why India's fielding has IMPROVED in the last few years 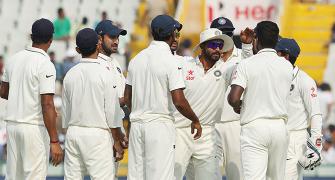 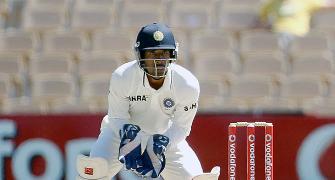 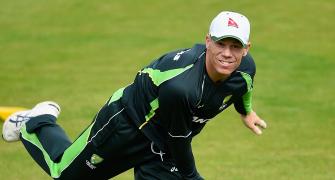 Meet the man who transformed Warner into most-feared batsman 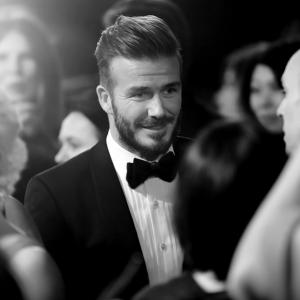 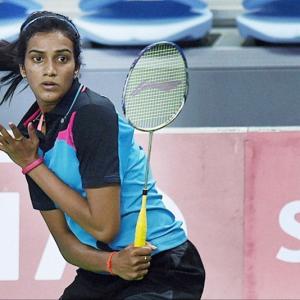