The second Test between India and South Africa ended in a damp draw after cyclonic rains and a wet outfield ensured not a single ball could be bowled for a fourth successive day at Bengaluru's M Chinnaswamy Stadium on Wednesday.

Due to the inclement weather, no play has been possible since 81 overs were bowled on the opening day of what was South African batsman AB de Villiers' 100th Test match.

India, who lead the four-match series 1-0, were 80 for no loss in response to South Africa's first innings total of 214.

The third Test is in Nagpur and starts on November 25.

© Copyright 2021 Reuters Limited. All rights reserved. Republication or redistribution of Reuters content, including by framing or similar means, is expressly prohibited without the prior written consent of Reuters. Reuters shall not be liable for any errors or delays in the content, or for any actions taken in reliance thereon.
Related News: South Africa, AB de Villiers, Ian Gould, Richard Kettleborough, Umpires CK Nandan
COMMENT
Print this article 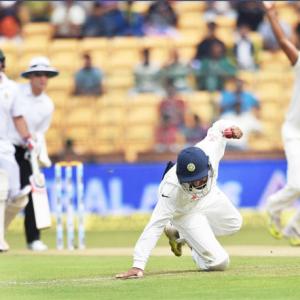