Riding on a splendid bowling spell by debutant seamer Dharmendrasinh Jadeja, Saurashtra beat Madhya Pradesh by 227 runs on the fourth and final day of their Ranji Trophy Group A match and entered into knockout stage.

Playing his first Ranji Trophy, Jadeja scalped six wickets in Madhya Pradesh's second innings giving away 51 runs off 26.4 overs, and was well supported by off spinner Kamlesh Makvana, who finished with three for 43.

After scoring 242 in the first innings, Saurashtra restricted MP to 135.

In the second essay, the hosts declared at 303 for four to set MP a target of 411, but the visitors were bowled out for 183.

Resuming at 89 for two, MP could add only 94 more runs before getting all out in 68.4 overs.     Jalaj Saxena (75) and Rameez Khan (31) were the only batsmen for Madhya Pradesh, who resisted Jadeja-Makvana duo.

Saxena and Khan added 85 runs for the third wicket and at that stage it looked as if MP would save the match but once Khan was bowled out by Jadeja, rest of the batsmen surrendered against the pace-spin duo.

The match was crucial for both the sides to enter into knockout rounds where MP needed only three points, while an outright win was required for the hosts.

With this win, Saurashtra earned six points and improved their position with 23 points. 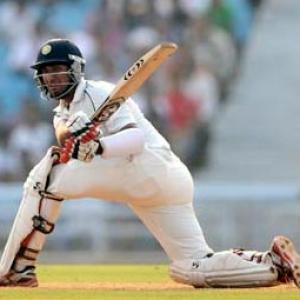 Ranji: Saurashtra in command against MP