Owing to their first innings lead, Bengal grabbed three crucial points against Haryana after their Group A Ranji Trophy match ended in a draw at the CH Bansi Lal Cricket Stadium, Lahli in Rohtak on Monday. 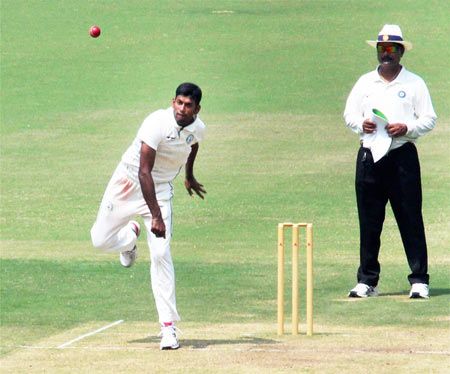 Resuming their second innings at 146 for seven, Bengal declared at 211 for eight, to set Haryana a target of 316. Overnight Bengal batsman Pankaj Shaw (61) produced a patient 148-ball half century which included two fours.

Haryana's run chase was derailed early on when they were reduced to 14 for 2 in 6.1 overs but skipper Virendra Sehwag blasted a 52-ball 46 laced with six boundaries, while Rohit Sharma (50) and Sachin Rana (50) cracked twin half centuries to reignite the chase.

However, Sehwag was dismissed by Sayan Mondal in the 23rd over and once Rohit and Sachin were sent back to the hut by Mukesh Kumar and Ashok Dinda respectively in the 43rd and 52nd over, the match was headed for a draw.

Wicket-keeper Rahul Dalal (1) was also dismissed by Dinda as Haryana eventually ended their second innings at 195 for six in 62 overs.

Jaipur: Pranay Sharma scored a century but could not prevent Rajasthan from slumping to a 92-run defeat against Karnataka on the fourth and final day of their Ranji Trophy Group A cricket match on Monday.

Karnataka have six points from the win.

Chasing 358, Rajasthan were bundled out for 265 despite Pranay (114) and Dishant Yagnik (71 not out) chipping in with crucial runs.

Resuming on 42 for three, Rajasthan got off to a determined start with overnight batsmen Pranay and Tanveer-Ul-Haq adding 60 runs in the morning before Stuart Binny dismissed the latter for 19.

Tanveer's wicket triggered a mini collapse as Rajat Bhatia and Puneet Yadav fell inside the next two overs with the home team reeling at 116 for six.

However, Pranay, who went on to complete his second first-class century, along with Yagnik, fought back to keep the hosts' chances alive with a 98-run partnership for the fourth wicket.

But Pranay's dismissal off David Mathias's bowling put a check on Rajasthan's run rate and then they eventually got all out, even as Yagnik remained unbeaten at the other end.

Bhubaneswar: Both Odisha and Delhi suffered batting collapses as 18 wickets fell on the final day of their Ranji Trophi Group A match, which ended in a draw, on Monday.

On the morning of the final day, Odisha resumed their first innings at 195 for four.

However, quick wickets spiced up the day, preventing it from becoming a drab affair. It was Delhi paceman Pradeep Sangwan, who wreaked havoc by scalping five batsmen. He removed both overnight batsmen Anurag Sarangi (6) and Pratik Das (16) in his successive overs.

He then accounted for Suryakant Pradhan (7) Deepak Behera (11) and Dhiraj Singh as Odisha lost the last six wickets for just 22 runs.

Sangwan ended up with career-best figures of seven for 38.

Delhi began their second innings in solid fashion with each of the three top-order batsmen scoring half-centuries. They were comfortably placed at 159 for three but ended up losing next six wickets for just 34 runs.

Skipper Gautam Gambhir was dismissed first by Shiraj Singh while the other opener Dhruv Shorey (62) was run out. Nitish Rana also batted well for his 52 but mayhem followed after his dismissal. After Rana's dismissal Delhi added only 23 runs to their total, declaring the innings at 193 for nine.

Basant Mohanty was the most successful bowler with six for 39.

New Delhi: All-rounder Ravindra Jadeja was among the three half-centurions as Saurashtra chased down a steep 302-run target to register a four-wicket win over Services in their Ranji Trophy group C cricket match on Monday.

Overnight 311/6, Services declared at that score in the morning, setting Saurashtra a stiff target.

However, the visiting team put up a superb combined show to clinch a victory with four wickets to spare.

The foundation for the triumph was laid by opener Mohsin Dodia (65) and skipper Sagar Jogiyani (27), who shared a second wicket stand of 71 runs.

Wickets fell regularly after that but Saurashtra batsmen did not allow that to disturb the chase significantly and shared big partnerships in the middle order to cross the line in 80.3 overs.

Jadeja (55) and Arpit Vasavada (57) were the most notable contributors in the lower half of the line-up.

For, Services, Muzzaffaruddin Khalid was the pick of the bowlers with a haul of 4/147 in 31 overs.

Nagpur: Spin duo Akshay Wakhare (6/58) and Aditya Sarwate (4/74) combined to skittle out Maharashtra for 162 as Vidarbha notched up a 82-run win and grabbed six points from their Ranji Trophy Group A match on Monday.

Wakhare and Sarwate combined well to derail Maharashtra's chase as they were bundled out in 46.3 overs at Vidarbha Cricket Association Ground.

Chasing 245 to win, Maharashtra resumed their second innings at 3 for 1 on the fourth and final day and opener Harshad Khadiwale produced a strokeful 55 which was studded with nine boundaries and one six.

Overnight batsman Ankit Bawne (23) was the first to be dismissed in the 13th over when he was caught by Wasim Jaffer off Wakhare, Khadiwale was sent packing next by Sarwate with Faiz Fazal taking the catch.

Shikant Mundhe (4), Jadhav and Chirag Khurana (9) then became the victims of Wakhare in the 24th, 28th over and 34th over, while Rahul Tripathi was trapped LBW by Sarwate as Maharashtra slipped to 135 for seven in the 37th over.

Akshay Darekar (2) and Anupam Sanklecha (1) then were removed by Sarwate and Wakhare in the 41st and 44th over, while skipper Rohit Motwani was the last batsman to be dismissed.

Resuming at the overnight score of 200 for four, Rahil Shah, who didn't bowl in the first innings, scalped four wickets for 38 runs, including that of V Cheluvaraj (88) to trigger Railways' collapse.      Railways lost their last six wickets for 40 runs inside 19 overs. The hosts lost their first wicket of the day in the fifth over when captain Mahesh Rawat (78) was trapped leg before by seamer J Kousik (2/45).

Rahil then got into the act, dismissing Cheluvaraj, the other overnight, caught behind three overs later to reduce Railways to 215 for six.

There was hardly any resistance from the other Railways batsmen, as Rahil cleaned up the tail with three more wickets to bundle out the hosts for 240 in 88.2 overs.

Set a paltry target of 77, Tamil Nadu lost a chance to secure seven points when captain Abhinav Mukund was bowled by Anureet Singh in the ninth over.

But the visitors rode on Dinesh Karthik's 40-ball 43 to complete the chase in 23.2 overs.

Vododara:  Yusuf Pathan gave Madhya Pradesh a mighty scare before the visitors rode on Mihir Hirwani and Punnet Datey's fine bowling to register a 87-run win over Baroda in an exciting Ranji Trophy Group B cricket match, on Monday.

Chasing a stiff 262-run target for an outright win, Baroda were in dire straits at 31 for the loss of five wickets.

But then walked in dangerous Yusuf (86 off 98 balls), and in Swapnil Singh's (47) company raised hopes of an improbable victory for Baroda.

Yusuf and Swapnil shared 132 runs for the sixth wicket to raise the hopes of the home team but once the big-hitting batsman departed, the writing was on the wall for Baroda as Hirwani ran through the lower-order to bundle out the hosts for 174 in 48.4 overs.

Earlier, resuming their second innings at the overnight score of 113 for two, Madhya Pradesh took chance and played aggressively to score 175 runs off just 28 overs before declaring their innings at 288 for the loss of six wickets.

Overnight batsman Rajat Patidar smashed a quick-fire 101 off 127 balls, while Harpreet Singh (53) and Rameez Khan (52) made fifties to make a match out of the tie and give their bowlers a chance to register an outright win.

Dharamsala: Himachal Pradesh hammered Tripura by an innings and six runs on day four of the Ranji Trophy Group C match on Monday.

Tripura, who had a big task of saving the game after resuming the day at 88 for three, were bowled out for 270 in their second innings. They had made 285 in their first innings and Himachal Pradesh replied with 561 for five.

It was a collective bowling effort from the Himachal bowlers with Rishi Dhawan taking two wickets and Ankush Bedi and Akash Vasisht picking up three each.

Jamshedpur:  Shadab Jakati (5/72) took a five-wicket haul to bundle out Jharkhand for 209 and give Goa a 93-run first innings lead and three points in a Group C Ranji Trophy cricket match that ended in a draw on Monday.

In reply to Goa's first essay total of 302, Jharkhand resumed at 154 for four but failed to surpass the visiting team's score.

Goa then declared their second innings at 102 for five and set Jharkhand a target of 196 late on the final day.

Yadav (3/47) took three wickets in Jharkhand's chase and they slumped to 100 for six before the stumps were drawn, and the home team managed to draw the game.

Image: Vidarbha's Akshay Wakhare in action during a Ranji Trophy match against Maharashtra at Vidarbha Cricket Association (VCA) Stadium in Nagpur on Monday