Ranji Trophy: Mumbai settle for a draw with Jharkhand 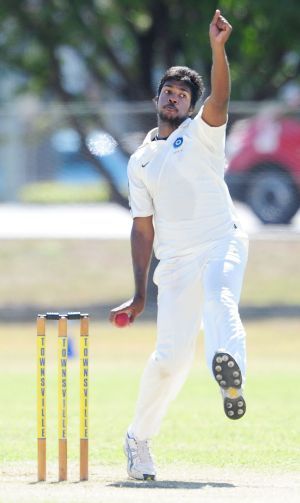 Having conceded the vital first innings lead to minnows Jharkhand, champions Mumbai had no other option but fight for a draw, which they successfully did after surviving anxious moments in their Ranji Trophy Group A game at the Wankhede stadium.

Placed at the bottom of table, Jharkhand, overnight 176 for five in the second innings -- after taking a first innings lead of 86, delayed the declaration as they wanted Ishant Jaggi, who was unbeaten on 51 on the third evening on Sunday, to complete his century.

The visitors finally declared at 278 for 7, Jaggi's contribution being 103 not out in 217 minutes, 41 minutes to lunch, but the delay in making the declaration robbed Jharkhand's bowlers valuable time, with Mumbai set a stiff target of 365 in 64 overs for victory.

When stumps were drawn finally, Mumbai had lost five of their top-order batsmen with 115 runs on board. At one point of time the hosts were in deep trouble at 78 for five in the 44th over.

The extra pace of Varun Aaron, who grabbed four wickets in Mumbai's first innings, again did the early damage.

The pacer sent back the seasoned Wasim Jaffer (10) cheaply for the second time in the match and Sidesh Lad (4) to reduce the hosts to 28 for 3 after Shiv Shankar Rao trapped Sushant Marathe leg before. It was the opener's second 'duck'.

Mumbai's batsmen then fought with their backs to the wall with Aditya Tare (36) again showing good application.

Though Tare later edged a sharply, turning ball from rival captain and left-arm spinner Shahbaz Nadeem to slip fielder Saurabh Tiwary and was followed soon by home team skipper Abhishek Nayar, time ran out for the visitors to force what would have been a memorable victory over the 40-time champions.

From 78 for 5, left-hander Shah and Suryakumar Yadav (31 not out in 52 minutes) kept the rival bowlers at bay till play was called off after the eighth mandatory over.

For Jharkhand, Aaron and Nadeem secured two wickets each.

Jharkhand, already out of contention for a place in the knock-out phase, secured three points to boost their tally to six from as many games.

Mumbai gained a solitary point that took their tally to 20 from the same number of games and helped them maintain their lead in the league table.

Rohtak: Karnataka's batsmen made heavy weather of a small run-chase before registering a three-wicket win over Haryana in their Ranji Trophy Group A match.

They were made to toil by Haryana pacer Harshal Patel, who snared his second five-for in the match, to reach the 97-run target at Bansi Lal Cricket Stadium.

All-rounder Stuart Binny (31 off 30 balls) played a cameo and held one end up to take his side home after they started the fourth and final day at 62 for 4.

Patel, who had two wickets against his name, removed Karnataka skipper C M Gautum (5) without adding to his overnight total after Binny looked to finish off the target quickly.

Karnataka were jolted by three-quick strikes from Patel in the space of four runs, making the run-chase more enticing.

Patel got Gautam caught on 82 and went on to remove Ganesh Satish (0) and Abrar Kazi (0) to raise hope of an improbable win.

But Binny kept his cool to prevent further blemishes as the visitors collect full six points.

Gwalior: Rajasthan took merely ten overs to complete the formalities and register an emphatic seven-wicket win over Madhya Pradesh in their Group B Ranji Trophy match in Gwalior.

Overnight 77 for 3 in a chase of 148, Rajasthan relied on Robin Bist (63 not out) and Ashok Menaria (49 not out) to romp home on the fourth and final day of the match.

This was Rajasthan's first win this season after two losses and three draws. The team's points tally now stands at 11 from six matches.

Madhya Pradesh, on the other hand, slumped to their second loss of the season. In fact, MP is yet to register a win this year, having drawn four apart from the two defeats.

Earlier in the morning, Bist and Menaria combined well to steer Rajasthan to victory. The duo put together a 73-run unbeaten stand to finish off the task with utmost ease.

While Bist's knock came off 88 balls, including 10 fours, Menaria was a tad more aggressive consuming just 34 deliveries in his innings, which was studded with nine boundaries.

For MP, Ishwar Pandey was the most successful bowler with figures of 2/52 in 12 overs even though he failed to strike.

Chennai: Off-spinner M Rangarajan took a six-wicket haul as Tamil Nadu got the better of Baroda by nine wickets and earned full six points on the fourth and final day of their Group B match.

After Rangarajan (6/46) and R Aushik Srinivas (3/23) shared nine wickets between them to bundle out Baroda for a mere 129 in their second innings, Tamil Nadu were required to chase down just 59 runs for victory, which they achieved comfortably, losing just one wicket.

Earlier, Tamil Nadu had scored 233 in their first innings in reply to Baroda's 162 in the first essay, thereby taking a solid 71-run lead.

Resuming on 73 for 1, Baroda lost overnight batsman Aditya Waghmode, who added just three runs to his Sunday's score of 19 before becoming Rangarajan's first victim of the day.

Waghmode had put on an important 53-run stand with the other overnight batsman Dhiren Mistry for the second wicket.

Mistry, starting on 29, however, went on to complete his half-century even as wickets kept tumbling at the other end.

Waghmode's dismissal triggered a collapse, and, from 91 for 2, the visitors were all out for 129. They lost eight wickets for only 38 runs. None of the middle or lower order batsman could reach double digits.

Mistry was the lone batsman who tried to consolidate the innings, scoring a patient 230-ball 64 including five boundaries.

Railways get 3 points from ill-tempered match against Bengal

New Delhi: Railways’ pace duo of Anureet Singh and Krishna Kant Upadhyay took 35 balls to dismiss the remaining three Bengal batsmen as the home team got three important points by virtue of their first innings lead of 36 runs in the Ranji Trophy Group B encounter.

Railways are very much in the hunt with 20 points from five games, while Bengal's chances of making it to last eight is slowly evaporating with only 12 from five games.

It was a matter of one wicket as Railways needed to get rid of the gritty Iresh Saxena, who batted for nearly two hours playing 84 balls for his six. His luck finally ran out when Anureet (5-97) completed his five-for with a ball that came in and the Bengal batsman was trapped leg before.

There was a strategic mistake from Shukla, who was exposing Saxena to the pacers on a early morning track by playing the single within the first two balls and there was always a danger of a tail-ender being found wanting.

There was no love lost between new man Ashoke Dinda and the Railways players with skipper Murali Kartik standing near the striker's end to welcome the Bengal speedster.

Kartik must have been saying something uncharitable to Dinda on the pretext of setting the field as umpire Milind Pathak had to intervene and tell Kartik to get back to his place. A few balls later, Dinda pulled Anureet to boundary and waved his bat in 'Sreesanth fashion' (Durban 2006 after hitting Andre Nel).

After a few airy shots, Dinda was destined to play a mistimed pull-shot which was gleefully accepted by the bowler Krishna Kant Upadhyay (3-78).

The very next delivery saw Shib Shankar Paul walk down the pitch like Robin Uthappa, only to play a faulty forward defensive stroke that saw his stumps cart-wheeling and Upadhyay made an ugly gesture of a kick, which saw the umpire talking to the pacer.

Upadhyay later said he was furious after Dinda made a "few unsavory comments".

The match only had some academic interest left and Dinda did his bit of 'gamesmanship' by trying to 'Mankad' Shivakant Shukla but the ball didn't hit the stumps.

Railways finally ended the day at 193 for two as Nitin Bhille completed his second first-class century, courtesy Murali Kartik's decision to continue playing during the mandatory overs which led to Bengal players refusing to shake hands with their opponents at the end of the match.

Bengal captain Laxmi Ratan Shukla suffered a groin injury but is expected to be fit before the UP match, starting on December 14.

Sehwag fails yet again as Delhi settle for three points

Sambhalpur: Virender Sehwag again came cropper in his desperate bid to cross the 50-run mark as Delhi managed three points by virtue of their first innings lead against Odisha in a group A Ranji Trophy encounter.

Delhi scored 231 for six before declaring and setting an impossible target of 285. Odisha in the 14 overs of formality managed 37 runs.

Sehwag, who looked in fluent touch yesterday evening was at his scratchy best he scord only 12 runs in the 50 balls that he faced today. Sehwag now has only 113 runs from eight innings, with the highest being 44 in the second innings in the match.

With these three points, Delhi are now on 12 points from five games and will have to at least win a couple of outright games to qualify for the knock-out stages.

Odisha, on the other hand, now have 10 points from five games.

Mohali: Jiwanjot Singh and Uday Kaul notched a double hundred and century respectively but Punjab had little else to cheer as they had to settle with just one point after their Ranji Trophy Group A match against Vidarbha ended in a draw.

Vidarbha took three important points from the first-innings lead. Vidarbha had scored 360 all out in their first innings, in reply to Punjab's 184 all out.

Jiwanjot, on 188 overnight, was out for exactly 200, having struck 25 fours, while Uday made 133 on the fourth and final day at the PCA Stadium.

Punjab eventually declared their second innings at 469 for 5, having batted for 24 overs on the fourth day to add 139 to their overnight 330 for 1.

That left Vidarbha 294 to get for their second win of the season, but those hopes received a quick blow as Punjab struck twice early.

Sandeep Sharma trapped Faiz Fazal for a duck in the first over before Siddarth Kaul dismissed Ravi Jangid for 10 to leave the visitors at 46 for 2.

But Akshay Kolhar and the captain Shalabh Shrivastava shut the door on Punjab, putting up 140 for the third wicket in 39 overs.

Kolhar faced 154 balls to score 91. Shrivastava was batting on 60 having struck five fours, before the game fizzled out into an inevitable stalemate.

Guwahati: Goa Off-spinner Amit Yadav wrecked Assam with a seven-wicket haul before his team chased down down a 50-run target with ease to clinch a 10-wicket win on the fourth and final day of their Ranji Trophy Group C encounter.

Reeling at 31 for four at stumps on Sunday, Assam collapsed to 208 to set Goa a target of 50 runs. Amit was the undisputed star of the Goa show, doing the bulk of the bowling.

His 31 overs, including nine maidens, cost merely 69 runs and yielded seven wickets for the visiting side. Jamaluddin Syed Mohammed was the top-scorer for the hosts with 67 runs.

In reply, Goa hardly broke a sweat in chasing down the paltry target with openers Amogh Sunil Desai (14) and Swapnil Asnodkar (33) clinching the issue in 9.5 overs to give the team its second win in five matches. 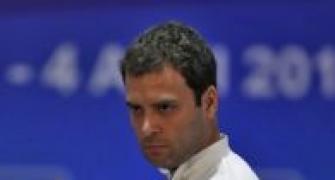 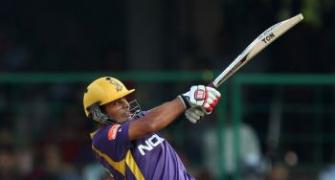 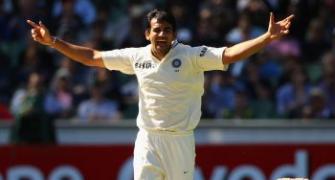 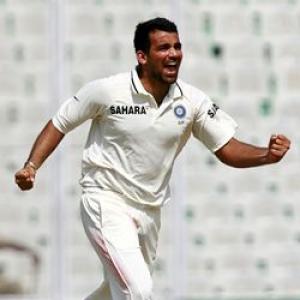 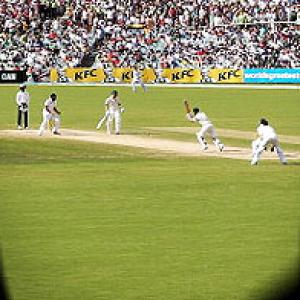