The 20-year-old Shreyas Iyer smashed his maiden first class century (153) to help Mumbai grab the day one honours against Bengal in their Group A Ranji Trophy cricket match at the Eden Gardens.

Promoted to number three, Iyer hit the Bengal bowlers all over the park with four sixes and 16 boundaries in his 175-ball knock en route to his first century as Mumbai ended the day at a commanding 306 for four.

His four sixes included two against Veer Pratap and one off pacer Ashok Dinda as the youngster did not give Bengal bowlers any chance. Poor fielding too was a letdown for Bengal.

Iyer's free-flowing innings finally came to an end after he edged Ashok Dinda behind the stumps, just three overs before bad light stopped play in 86.2 overs. Iyer put on a 176-run stand for the third wicket with a defiant Abhishek Nayar (65).

While Iyer was a delight to watch as he showed no mercy to an out-and-out seam attack from Bengal, hitting them all over the park, Nayar rotated the strike cleverly as the duo scored briskly at 4.69 per over in the association that began in the post lunch session.

It indeed helped their cause as the opening pair of Aditya Tare and Akhil Herwadkar began the proceedings at a snail's pace, scoring at less than two per over. 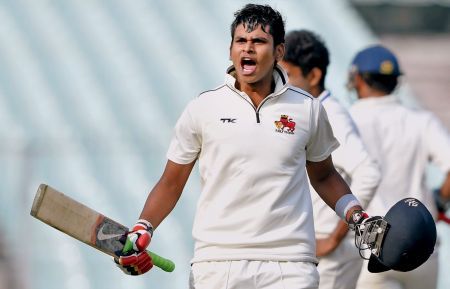 Mumbai could only seize the momentum in the second session of the day after the dismissal of Tare who consumed 105 balls for his 24 that also included two reprieves – while on 4 and then on 23 -- in the slip cordon and both by a butterfingered Sudeep Chatterjee.

Earlier, captain Laxmi Ratan Shukla put the visitors in, hoping to captilise on the early morning gloomy condition on a seaming Eden track but his fielders let him down severely.

Despite being dropped twice, Tare was in no mood to score runs and had a tentative start, while the left-hander Herwadkar too looked out of sorts but he was the one to take charge against the new ball attack of Ashok Dinda and debutant Pritam Chakraborty.

Finally, Shukla gave the breakthrough with Chatterjee taking an easy catch of Herwadkar who chased an away going delivery without any footwork to be caught at second slip.

The quiet start meant Mumbai were just 79/1 in 33 overs at lunch and Tare was dismissed in the third over post lunch as their runrate went northwards after Nayar joined Iyer in the middle.

Skipper Suryakumar Yadav (22) and Siddhesh Lad (0) were batting at close.

Rajkot: Mandeep Singh struck his maiden century of this Ranji Trophy season while Yuvraj Singh was nearing his third successive ton as Punjab reached 327 for three on day one of the Group B match against Saurashtra.

Yuvraj was batting on 95 alongside Mandeep, who was on 154 off 228 balls. Medium pacer Sudeep Tyagi was the most successful bowler for Saurashtra with figures of two for 51 in 15 overs.

Yuvraj made a statement with another solid knock after not being named among the 30 probables for the 2015 World Cup.

The stylish left-hander smashed 11 boundaries and couple of sixes in his 176-ball effort.

He had scored 59 and 130 in Punjab's tournament opener against Haryana before making 136 in the first innings against Maharashtra in Pune.

New Delhi: Back in form after his fluent century against Rajasthan, Unmukt Chand made full use of playing against below-par Gujarat attack with an attractive unbeaten 97 that took Delhi to a comfortable 178 for one on the first day of a Ranji Trophy cricket match.

With only 53 overs of play possible on another fog-hit day, Delhi batsmen made full use of a low and slow Feroz Shah Kotla track as Unmukt, in company of skipper Gautam Gambhir (66), added 171 runs for the opening stand.

Unmukt looked confident from the onset as he punished both pacers and spinners alike. When medium pacer Ishwar Chaudhary dropped one short, he was quick to rock back and play the perfect pull-shot behind square for maximum.

He hit three more sixes -- two off off-spinner Jesal Karia's bowling in the arc and one off left-arm spinner Pranjal Sutaria apart from 12 boundaries in 170 balls.

Another three runs would give him sixth century in first-class cricket and second successive in the tournament.

Gambhir, on his part was a bit scratchy to begin with but grew in confidence watching his opening partner in full flow. He also hit two sixes apart from five fours. One came off Sutaria and other off seamer Kushang Patel.

The India discard should be cursing himself for not converting into a big hundred as he missed the line of a Karia delivery to be bowled. Gambhir faced 143 deliveries.

The absence of Axar Patel did hurt Gujarat, who are also handicapped in the batting department due to the absence of their regular skipper Parthiv Patel, who pulled out complaining of cervical pain.

The two new ball bowlers, Rush Kalaria and Kushang were at best military medium and they even failed to hit the deck properly which meant that batsmen had all the time in the world to play their strokes. The odd edge to the slips didn't even carry due to the low and slow nature of the track.

At stumps, Virender Sehwag was at the other end undefeated on 2.

Sehwag normally bats at No 4 but Delhi coach Vijay Dahiya said that the veteran batsman has been seny up to play his natural game and prop up the team total in quick time.

On a day when only 151 minutes of play was possible due to drizzle and bad light, last match centurian Mukund made 57 off 142 balls, hitting four boundaries and two sixes.

The 24-year-old was dismissed after he nicked to an incoming delivery from leg-spinner Aasish Yadv and Mahesh Rawat took a neat catch behind the wickets.

At close, Baba Indrajith (39) and captain R Prasanna (zero) were at the crease when played was called off.

Mahesh's decision to bring on off-spinner Arnab Nandi alongside medium pacer Anureet Singh paid off in the sixth over of the day when Railways scalped the wicket of opener Bharath Shankar (4).

With Nandi operating, Mahesh placed Anustup Majumdar at forward short-leg and Shankar played a turning ball defensively, only to give an easy catch to Majumdar.

First down batsman Baba Aparajith stayed on the crease for sometime before deciding to step out to hit Arnab Nandi. He ended up giving a catch to the bowler. His individual 27 came off 46 balls and contained two fours and a six.

Dinesh Karthik, who had rescued Tamil Nadu to manage a draw against Madhya Pradesh in their last match, was adjudged leg before the wicket to Aasish Yadav when he was 15 (2x4).

Gwalior: Saurabh Wakaskar (94) and Deepak Hooda (82) smashed twin half-centuries to help Baroda reach 291 for six against Madhya Pradesh on the opening day of their Group A Ranji Trophy cricket match.

Wakaskar hit 11 boundaries in his 150-ball innings, while Hooda's unbeaten 140-ball stay was studded with 12 fours and one six at the Captain Roop Singh Stadium.

At the draw of stumps, Hooda and Swapnil Singh (13) were at the crease.

Invited to bat, Baroda lost their first wicket when Khan had Kedar Devdhar (13) caught behind by Naman Ojha in the 11th over. First down batsman A Waghmode too was dismissed with Ojha taking another catch behind wicket off Datey's ball.

Wakaskar and Ambati Rayudu (40) then shared a 84-run stand before the latter too was sent packing by Datey in the 41st over.

In the next over, Khan had newman Yusuf Pathan (0) trapped infront of wicket as Baroda slipped to 136-4 in 41.2 overs.

Wakaskar then added another 55 runs with Hooda before becoming a victim of Sanjay Mishra. Hooda and Pinal Shah (28) then took the score to 253 when the latter was dismissed by Sharma in the 72nd over.

Opting to bat, Soumik Chatterjee (70) and Nakul Verma (27) took Services to a healthy score of 85 for one. Bhandari broke that partnership with the wicket of Verma.

Services could not manage any decent stand after that and slipped to 161 for seven.

Key batsmen Rajat Paliwal (14) and Yashpal Singh (27) could not push on from their starts. Yashpal was bowled by Bhandari.

Punia and Abhishek Sakuja prevented further damage with an unbeaten 74-run stand. Punia struck three fours and four sixes in his 61, while Sakuja consumed 79 balls for his 18. 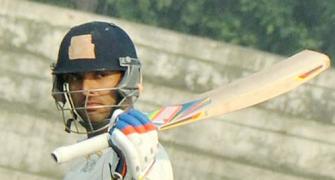 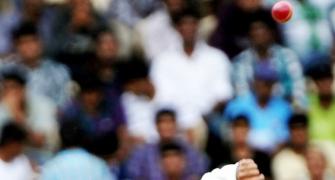 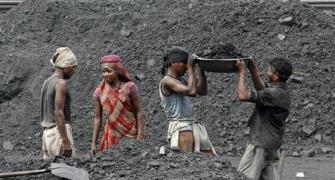 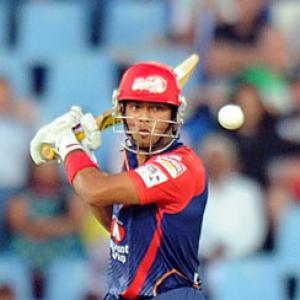 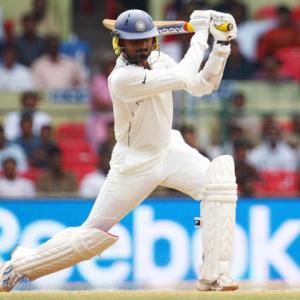